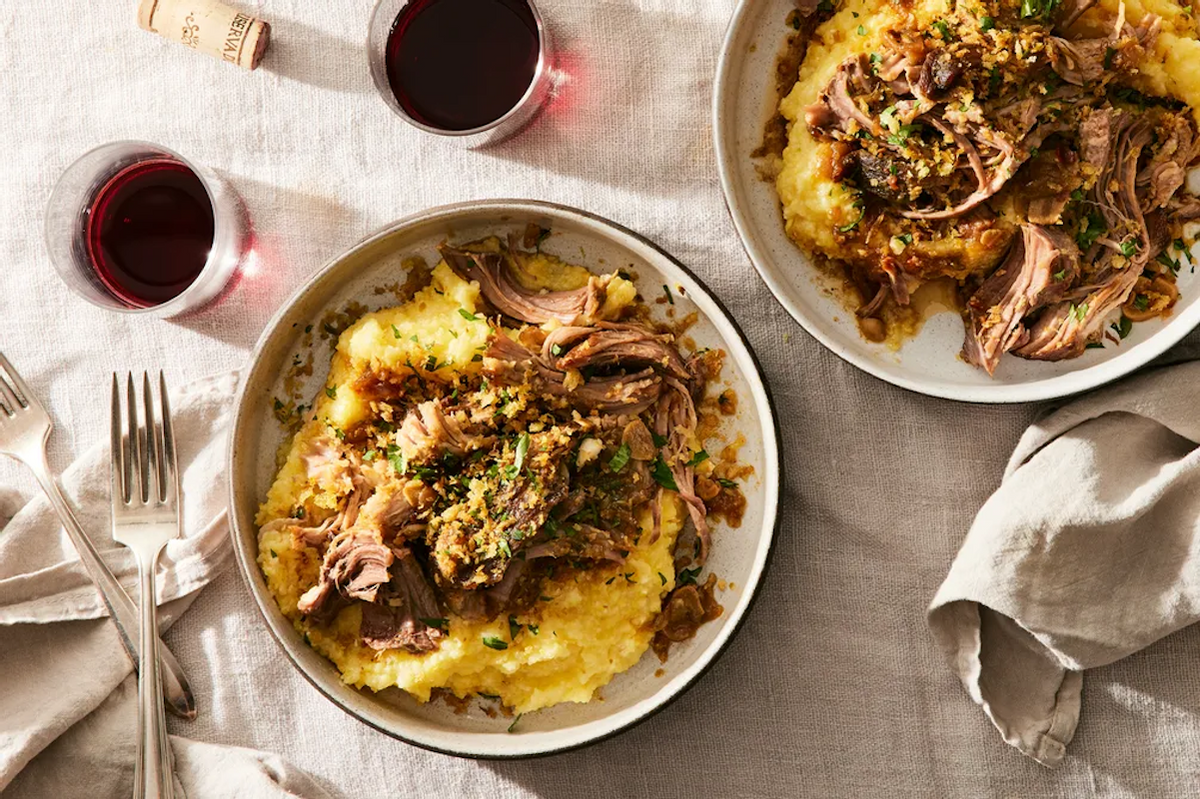 Like many people, I've given a lot of thought to what I'd like my last meal on earth to be. I've always required a skillet of baked macaroni and cheese, made with a trio of Gruyere, cheddar, and Swiss and topped with golden brown breadcrumbs. But over the years, I've tweaked what I'd like alongside my mac. Sometimes it's been butter-poached lobster, other times it's been pulled pork, and sometimes it's just more mac and cheese.

Currently, I stand by a plate consisting of half pulled pork and half mac and cheese. But the good news is that's just my last meal on earth. I firmly believe that one day, I'll find myself in hog heaven and I can rest easy.

A guide to cuts of pork

As delicious as pulled pork or roasted pork shoulder is, it doesn't always come from the most attractive part of the pig. All of these recipes call for one of three common types of pork: pork shoulder (boneless or bone-in), pork butt, Boston butt, or picnic shoulder. But what's the difference between them anyway? And can you swap one for the other in any of these Dutch oven or slow cooker recipes?

For the record, pork butt and Boston butt are the same cut of pork. In grocery stores and butcher shops, it's more likely to be called pork butt but some recipes call for Boston butt; despite the conflicting names, you can use them interchangeably. Its name presents even further confusion, as pork butt or Boston butt actually comes from the shoulder of the pig. It rests above the pork shoulder or picnic shoulder and next to the pork loin (the latter of which is where pork chops come from).

According to Serious Eats, this cut of pork doesn't get its name from where it's located on the pig, but rather from some pretty interesting food history. "In colonial New England, butchers packed inexpensive cuts of meat into large barrels, called butts, for storage and transportation. The shoulder meat packed into these barrels became known as pork butt, and the name stuck," writes Elazar Sontag.

The other two cuts of pork that you'll generally find called for in a recipe for slow-cooked shredded pork are pork shoulder or picnic shoulder. Just like pork butt and Boston butt, these two cuts are exactly the same, just sold under two different names. Picnic shoulder is generally sold as a bone-in, skin-on cut of pork, which makes it more desirable. The skin gets super crispy when making roasted pork shoulder and the bone helps to prevent the meat from drying out, which is essential when cooking the pork for a long period of time.

Let's be real with each other for a minute — if you've ever cooked boneless pork shoulder, it's probably been in a slow-cooker or Instant Pot for game day. You slathered the juicy shredded pork with barbecue sauce, piled it high on a soft potato bun, and turned on the game. This recipe is a slightly more sophisticated version of that, ditching the BBQ sauce and using brown sugar, balsamic vinegar, soy sauce, ground sage, and mustard powder instead for a sweeter, neater pulled pork recipe.

Cooking any big cut of pork — whether it be pork shoulder, Boston butt, or picnic roast — requires a lot of time. Like, hours. But what's great about these pork shoulder recipes is that you don't need to stand over the stove for four hours consecutively. Sear the meat, add some spices (in this recipe, we're talking Calabrian chiles, anchovies, lots of garlic, and lots of herbs), and let it slowly braise in the oven while you tend to your never-ending list of errands.

Fun fact: You don't need a slow-cooker to make delicious pulled pork. Our best-ever recipe, which calls for boneless, skinless Boston pork butt, is made entirely in a big ole Dutch oven with lots of ground spices, a teeny tiny bit of brown sugar, and a generous splash (OK, 1/4 cup) of cider vinegar.

Bear with me: I know this pork shoulder takes more than 18 hours to cook. Don't freak out. Just unleash your inner pitmaster and rest easy knowing that while you sleep, a giant cut of bone-in, skin-on pork shoulder is transforming into the sweetest, most succulent showstopper you've ever tasted.

Fennel and pork are like peanut butter and jelly, Lambrusco and pizza. "Once the meat is seasoned with fennel seed, salt, and pepper, it goes into the oven at a high temperature to get a golden crust; then, it's covered and cooked for hours at a lower temperature to ensure the meat falls apart," writes recipe developer Colu Henry.

The trick to cooking delicious pulled pork isn't just about low heat and a lot of patience. Marinating the meat will also help; here, bone-in, skin-on pork shoulder is rubbed with a duo of granulated sugar and salt for 24 hours, which infuses it with flavor and keeps it super moist.

Go beyond a pulled pork sandwich and make a saucy ragu with boneless pork shoulder. Pair the tomato-y shredded pork with thick noodles like pappardelle.

If Martha slow cooks pork shoulder, then so do I. Crushed tomatoes, red wine, and fennel seeds give this tender pork shoulder recipe its decidedly Italian bent. Polenta makes the most natural accompaniment, although pasta and couscous are also good options. Serving it with red wine, however, is (almost) non-negotiable.

I will go to my grave believing that rum is an underappreciated spirit but this recipe is a step in the right direction. The tropical liquor is mixed with lime juice, minced garlic, allspice, and ginger for the most wonderful paste that's spread over roasted pork shoulder.

This recipe for gingery, spicy pork butt went totally viral after it was published in The New York Times and for good reason. Former Food52er Coral Lee praises this recipe for how forgiving it is for pork, but also how versatile the sauces are (she's even applied the same recipe to lamb shoulder and pork belly).