How the pandemic warped Gen Z 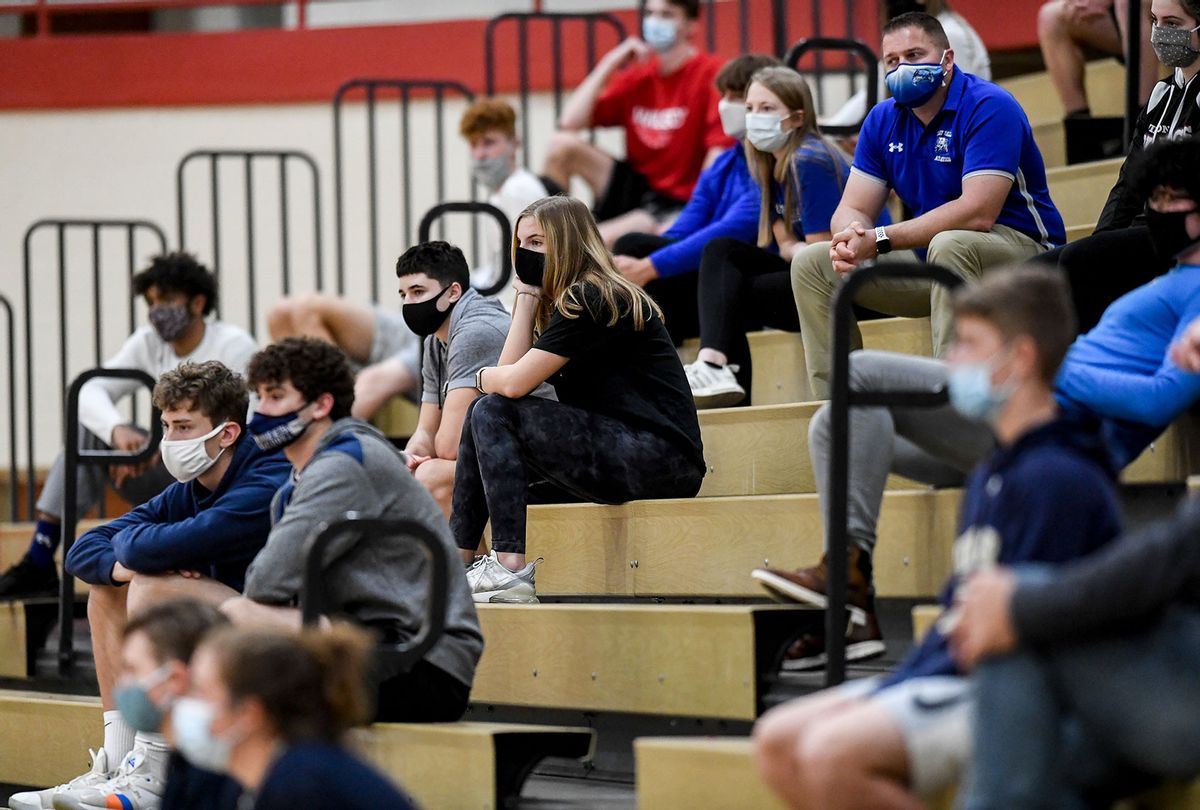 Students in the audience listen as Chris Herren speaks. At Wilson High School in West Lawn, PA where former NBA basketball player Chris Herren, who has been in recovery for more than 12 years, spoke to a group of High School students as part of the Caron Treatment Center Peak Performance Leadership Academy Tuesday afternoon April 13, 2021. As a precaution against the spread of COVID-19, seating at the event was limited, and video was recorded of the presentation by Herren, to be shown to other students later. (Ben Hasty/MediaNews Group/Reading Eagle via Getty Images)
--

Mikael Frey was a sophomore at Oberlin College in Oberlin, Ohio in March 2020, when he and his fellow college students were abruptly sent home. The pandemic's swift ascent meant that colleges and universities were pivoting to remote learning for the remainder of the semester. Frey already suspected that online learning did not work for him, and he was right: Like so many other college students, after experiencing a partially-remote spring semester, Frey took a leave of absence and joined the workforce. By New Year's Eve of that year, he was working the night shift at a nursing home's Covid unit during a major outbreak of positive cases.

Frey is one of many students who came of age during the pandemic and were forced to reassess their career priorities and college plans. Such students are uniformly part of Generation Z, defined by the Pew Research Center as those born after 1996; their futures have been uniformly warped by a major and unexpected world-historical event ripping through their lives at a formative age.

What that means for this generation — in terms of collective trauma, and economic outlook — is still not well-understood. Yet Gen Z-ers themselves are unified by the loss of years of essential social and emotional development. Not only did the pandemic disrupt many normal transitions from childhood to young adulthood but also uncertainty about what the future holds has perpetuated a sense of powerlessness as well as grief over lost youth.

"I grew up quickly, but I think I'd be doing myself a disservice to take that into a resentful, regressive place — wanting something back that's gone," Frey said. "I'm choosing instead to be looking forward and looking at the now and to be happy with what I have and what I'm doing."

Though he did not work on the Covid unit itself for very long, Frey recalls the question that went through his head every time he went into work: "Who's died?"

Following his freshman year, Frey completed clinical training to become a certified nursing assistant and passed the exam that December. The process took months, but as a pre-med student, he hoped to gain more experience in the medical field. In August, the 21-year-old returned to Ohio and transferred his CNA credentials so that he could work as a state-tested nursing aide rather than return to classes.

Though he did not work on the Covid unit itself for very long, Frey recalls the question that went through his head every time he went into work: "Who's died?"

"There was always an answer to that question," he told Salon. "There were very few times that month where I went in and there wasn't another death, and most of the time it was people who I knew, who I had talked with or cared for."

He describes this experience as horrific and traumatic in many ways, but emphasizes the extent to which he is grateful for the ability to have some level of control over the direction of his life.

"In some ways, I feel weirdly very empowered," Frey remarked. "Even when it was a little bit making me miserable, I was like, 'This is a choice that I'm making. I have enough money saved up that I could quit and I could look for a job somewhere else or I could beg my parents to let me come back home.' And I didn't. I always made sure to be really acutely aware of my choices."

Frey has since chosen to return to college with the shift back to in-person classes.

"I'm really choosing to be here and choosing to do the things I'm doing, to take classes I'm taking," he added. "I think I'm just a lot more thoughtful about my choices and aware of the fact that I have them."

RELATED: Gen Z and millennials are embarrassed about being narcissists

Frey's path may be exemplary in some ways. Estimates from the National Student Clearinghouse Research Center show that far fewer college-aged Americans enrolled in higher education during the pandemic. Undergraduate enrollment alone fell by 3.1 percent this year, following a previous drop of 3.6 percent from fall 2019 levels. Leaves of absence and a decline in new enrollments are largely responsible for the 1.2 million person shrinkage. Significantly, however, withdrawals remained in line with pre-pandemic rates.

Back in 2018, 57 percent of 18- to 21-year-olds no longer in high school were enrolled in either a two-year or four-year college program. Compared to 52 percent of millennials in 2003 and 43 percent of Gen X in 1987, Gen Z was on track to be the most educated generation in the United States. Prior to the so-called "Great Resignation," both teens and young adults in Gen Z were less likely to have a job than members of older generations were at the same age.

Smith College freshman Shelby Ward currently lives in Northampton, MA, but is on a leave of absence for the current semester — the second one they have taken during the pandemic — in relation to a diagnosis of depression. Finding it difficult to stay engaged with the move to online classes in spring 2020, they had not returned for the fall semester.

"Speaking up in class is already difficult enough," Ward said. "With the added pressure of everybody feeling really confused and uncomfortable and very poorly motivated, I got lost in the crowd in my Zoom classes and felt really uncomfortable speaking my mind while feeling no connection with my classmates or the professor."

Ward also told Salon that they felt they would not be able to gain the necessary interpersonal skills for a career in clinical psychology in this setting.

"I had this original trajectory in mind for psych," they explained. "I wanted to graduate on time and then go to grad school and hopefully be in some type of PhD program. I was aiming super high, and my motivation level and my mental health was entirely different at that time in my life, but I can't even imagine what my next steps are right now."

"Speaking up in class is already difficult enough . . . With the added pressure of everybody feeling really confused and uncomfortable and very poorly motivated, I got lost in the crowd in my Zoom classes."

From their abandonment of brand loyalty to staggeringly high rates of depression and anxiety, Gen Z has always confounded older generations. Now more than ever there is an emerging disconnect between those on the cusp of adulthood and older generations, even millennials — generational neighbors to whom Gen Z is often compared.

"There's so much more uncertainty in terms of where people are gonna end up," professor of sociology at the University of Michigan-Dearborn Pamela Aronson said. "There's so much less certainty about what's gonna happen day-to-day in the pandemic. 'Am I going to be able to get a job, do the things I want to do, even go to school the way I want to go to school or experience education or friends.' And I think there's a lot of jadedness, hopelessness, powerlessness, and mistrust of the people who are supposed to be supporting you."

As digital natives, Gen Z is in some ways a global generation, our cultural attitudes formed online rather than be geographically specific. Indeed, in finding common ground airing grievances about COVID-19, Gen Z has increasingly turned towards online forums.

One such forum is a Facebook page called Zoom Memes for Self Quaranteens. With a membership of nearly one million people, the group is a distillation of Gen Z's emotions around the social isolation of COVID-19. Founded March 12, 2020, the humor page rapidly grew to become one of the largest public groups on Facebook. The group soon drew the attention of researchers including Professor Aronson, whose December 2021 paper analyzed generational identity of emerging adults through memes in the Facebook group.

"A lot of us are quite angry that we've had to go to the workforce straight away, and we haven't had that experience that a lot of our parents had. . . and going out partying would be theirs, and ours would be maybe going on Facebook and looking up memes."

"Memes are essentially a reflection of our culture, but they also create culture," explains Professor Aronson. "What's really exciting about this group, and what's really interesting about it is you have people from all over the world who are sort of sharing in a similar internet culture, a similar popular culture. You have commonly recognized references that an older person wouldn't understand."

One moderator of the group, Abigail Masengi, a current junior at The University of Auckland in New Zealand, emphasized the importance of having a safe space for members of Gen Z.

"A lot of us are quite angry that we've had to go to the workforce straight away and we haven't had that experience that a lot of our parents had, a lot of our older brothers and sisters and our grandparents had — and going out partying would be theirs, and ours would be maybe going on Facebook and looking up memes," Masengi said. "Because we're missing out on that experience, we should have the right to complain about it and talk about it."

Content ranges from mockery of pandemic responses to workplace humor, though Professor Aronson suggests that the sarcasm of the humor is almost illegible to other generations. Because young people have little control over institutions that have a large influence on their lives, the style reflects a certain amount of powerlessness in the face of the pandemic.

"Every life sphere for a young adult has been disrupted by the pandemic, and so much uncertainty is associated with that," Professor Aronson stated. "Education, regardless of what level people are at, was disrupted. Work for a lot of people was disrupted. Romantic relationships, relationship formation, friendships — these are important developmental milestones. Generational conflict, generational animosity, — these are the things I think that are a result of that. To be honest, society has just dismissed the real and important needs of young adults during this period."

More articles on psychology and the pandemic: