How to cook lobster tails perfectly, every single time

A simple, foolproof lobster tail recipe for date nights in 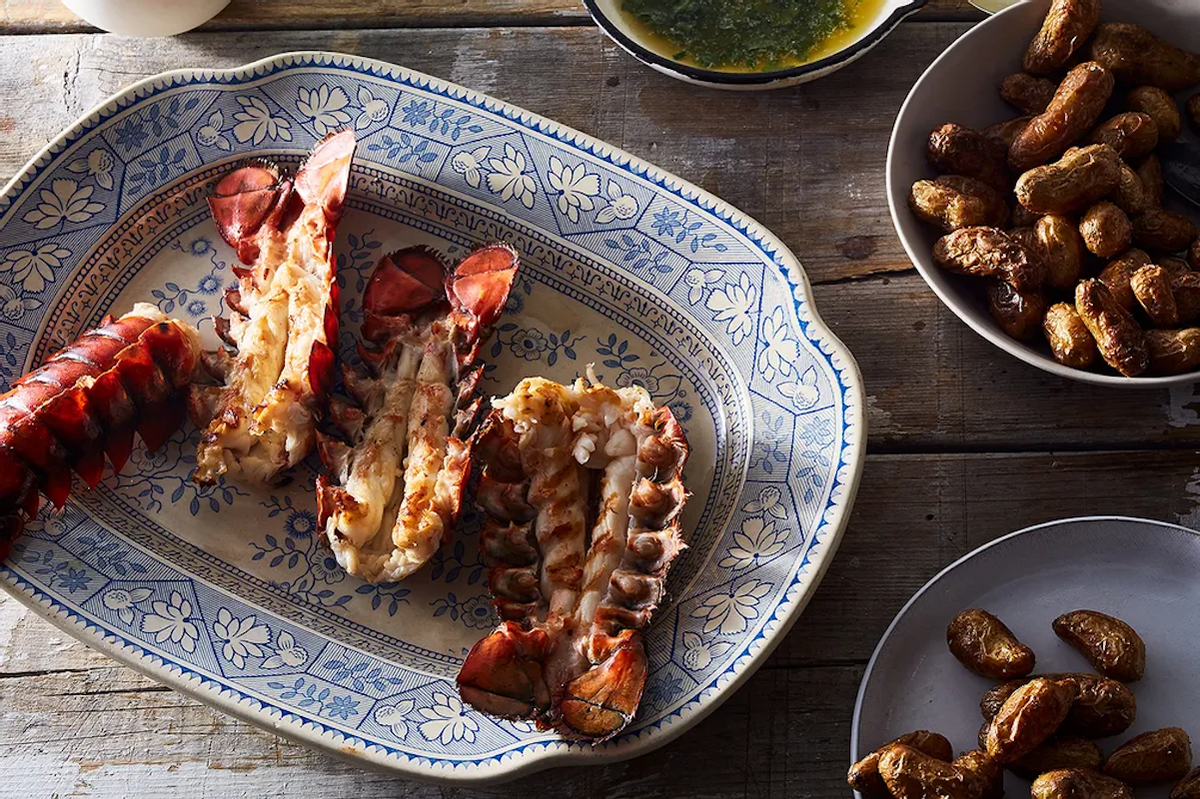 If you grew up playing The Sims like I did, then you know exactly what lobster thermidor is. Or at least, you know what it is in the context of the popular RPG (role playing game): It's the final meal your simulated character learns after studying the culinary arts over the course of a few days. As in real life, in The Sims, the more you cook and the more cookbooks you read, the more recipes you learn, and the faster your simulated character can graduate from salad to spaghetti to tri-tip steak, then finally to lobster thermidor.

The goal is always lobster thermidor.

So how does this relate to perfectly cooked lobster? Lobster thermidor is, for one, a dish I'd like to eat every single day. It also calls for lobster tail meat, which must be cooked properly in order to enjoy the succulent, sweet flavor of lobster and maintain its juicy texture, wihtout chewiness. If you bear with me for a few more minutes while I spread the love for lobster thermidor, I'll then get into how to thaw frozen lobster tails (which are much more accessible if you don't live in Maine and want to indulge in the crustacean year-round) and how to cook lobster tails.

In order to satisfy my curiosity and save you time and money, I tested four of the best ways to cook lobster tails, including steamed, broiled, boiled, and grilled. But first, back to lobster thermidor.

What Exactly Is Lobster Thermidor?

It's a gratin dish from the '60s and '70s where lobster tail meat has been folded into a creamy mélange of egg yolks, brandy, mustard, and Gruyère cheese. It's rich and delicious and hardly anyone makes it anymore.

Why? Because lobster's expensive as heck. If I lived on the Maine coast I'd have access to fresh lobster 24/7. But unfortunately I do not, so instead I enjoy it at home on special occasions like Valentine's Day, my birthday, or a Wednesday night.

If you can't get whole, live lobsters at your corner fishmonger, then I recommend heading to your local Whole Foods or Costco to buy frozen lobster tails.

But be warned: The two are vastly different. At the Whole Foods fish counter, you'll be able to find individual, uncooked (previously frozen) lobster tails for around $10 each. These are the small, fleshy, Maine-like ones that are sweet and flavorful. The Costco lobster tails might be more affordable by the pound, but you'll notice that they're a different breed than the American ones, i.e. they're large and spiny and from places like Nicaragua, Honduras, Costa Rica, etc. (I also think they're a little less flavorful, but that's just me.) But lobster is expensive enough and inaccessible enough that if you find a great product, stock up (that's the beauty of the pre-frozen stuff anyway).

Whatever you end up getting, be sure to thaw them properly before cooking.

How To Thaw Frozen Lobster Tails

As you would a chicken or a turkey, just plunge your frozen lobster tails into cold water for about 30 minutes, or until fully thawed. You could also thaw them in the refrigerator, but the water method is significantly faster.

Next, decide how you'd like to cook your lobster: Steamed? Broiled? Grilled? There are many ways, and to test each one, I decided to treat my family to a lobster tail dinner. Here's what happened: How To Cook Lobster Tail Steaming lobster tails was by far the simplest method, but only because my mother (whose house I was staying at this weekend) had a fancy steamer pot. I boiled the water, topped it with the steam basket, placed one lobster tail in the center, and covered. Many steamed lobster tail recipes online called for a cook time of 8 minutes, some even as long as 10 (!), but I noticed that the shell got red and the flesh became opaque at just 4 minutes—so I took the sucker out and ran it under cold tap water to stop the cooking process. Overcooking lobster tails will result in tough, chewy meat, so be sure to keep a close eye on the tails as they cook. As soon as the shell transforms into that classic fire truck red hue and the meat is opaque, pull it from the water and don't look back.

Verdict: This lobster tail, basted with melted butter, lemon juice, flaky sea salt, and a crack of black pepper, tasted super soft and sweet. I was surprised at how much I enjoyed it. When you need unadulterated lobster meat for something like, say, a lobster roll, then I highly recommend the steaming method. (I mean, come on: 4 minutes!) So, according to the internet, the most popular lobster tail recipe uses the broiler. Which makes a lot of sense: The high-heat broiler rocks when it comes to fresh seafood (which is why I didn't even bother to test an oven-baked version). Broiled lobster tails get caramelized on the outside and fully cooked through on the inside in a matter of minutes. I left mine in the oven for just 5 minutes (I find that it's perfectly done at 5, but you may prefer yours more well done and could cook it for as long as 10 minutes).

The real trick here is how you choose to prepare the lobster tail. I've noticed a couple ways that people like to do it. The first is how you're likely to see it in chain restaurants like Red Lobster: the top of the shell split, lobster meat bulging out. To achieve this, take a pair of kitchen shears and cut through the middle of the top shell from the fleshy end of the lobster to the tail. Then, using your fingers, gently split the shell apart to reveal the meat in the center. Brush with melted butter and season with salt and pepper before broiling (at high, or at about 550°F if your broiler specifies) for 5 minutes. This method for cooking lobster tails scores points for appearances, but like seafood chain restaurants, it's not the best option if what you're after are flavor and texture.

Verdict: Good. Surprisingly, the flavor was similar to that of the steamed lobster tail, maybe a little more muddied. Overall, I did feel that the steamed lobster had better texture and flavor, which makes me want to compare the preparations: The broiling method is just as easy and just as fast (helpful for those, like myself, who don't own a steamer pot). The only benefit I see, then, of broiling is the presentation—it certainly looks nice. Same cooking method as above (broil for 5 minutes), but to prepare this lobster tail, I exposed the meat on the underside. To do this, flip the lobster tail on its "back" (belly and little leggies facing up), and with a pair of kitchen shears, cut along the two sides where the softer under shell meets the harder outer shell, then the remaining attached side perpendicular to the tail end, essentially cutting off the bottom shell completely. Brush this exposed meat with melted butter, season with salt and pepper, place flesh-side up on a sheet pan, and broil.

Verdict: My dad was convinced that this lobster tail was superior (taste is in the tongue of the beholder). As for ease? The meat was definitely easier to pop out of its shell than the previous two. This should only be a concern to you if you don't plan on serving the lobster in its tail—which is, I think, very beautiful to do. So at the end of the day, it really is a matter of: 1) whether you want to use your stove or your oven and 2) how you want your lobster tail to look. It's an aesthetic thing. It's summer, so I figured I had to try this method. I split the tails in half (right down the center through the shell) to create some surface area for the flesh to hit the fire. I brushed the exposed meat with melted butter, salt, and pepper, and seared it on the grill over high heat for about 4 minutes, then flipped and cooked for another 3 to 4 minutes. Grilling expert Paula Disbrowerecommends a lower heat (medium) and a cook time of 5 minutes on the first side, then 4 to 5 minutes on the second side (with an internal temperature of 135°F). But as someone who'd much rather have undercooked lobster than overcooked, I took mine off the grill a little sooner and thought it tasted great.

Verdict: I wanted to hate this one (because not everyone has a grill), but it was by far my favorite lobster tail recipe. The others tasted fine, but this was the only one that had a flavor element that added something extra to the savory, buttery flesh of the lobster meat: smoke. The grill lends so much depth to lobster—but only if you don't overcook it.

I've made this dish a few times for my mother (because she loves cream sauces). I do think it's a great way to stretch lobster meat so it goes further—the mushrooms, cheese, and cream make everything feel so much more substantial than a plain ol' salted and buttered tail. So if you have an occasion where a lobster thermidor (level 10 in The Sims games) would be appreciated, then I recommend following the Chef John recipe video above, or this one by Beth (whom I also enjoy watching on YouTube):

However, just know that there are other ways to round out a lobster tail dinner. For my family, I merely roasted asparagus and prepared a fresh corn salad—and everyone was stuffed. Even more, we all got to enjoy the lobster for what it was: a vehicle for butter. And who doesn't love butter?

Obviously, I only had four lobster tails for this test (one for each family member) and had to prioritize which methods to try. If I had more time and resources, I'd cook a plain pan-seared version, maybe a boiled one, broiled with shell intact, steamed with bottom and top shells split, and so on. From this selection, I personally preferred the steamed lobster tail to either of the broiled variations—but the one that had my heart? Grilled.