Ukraine refuses to lay down weapons while under attack

"We are defending the country, the land of our future children" 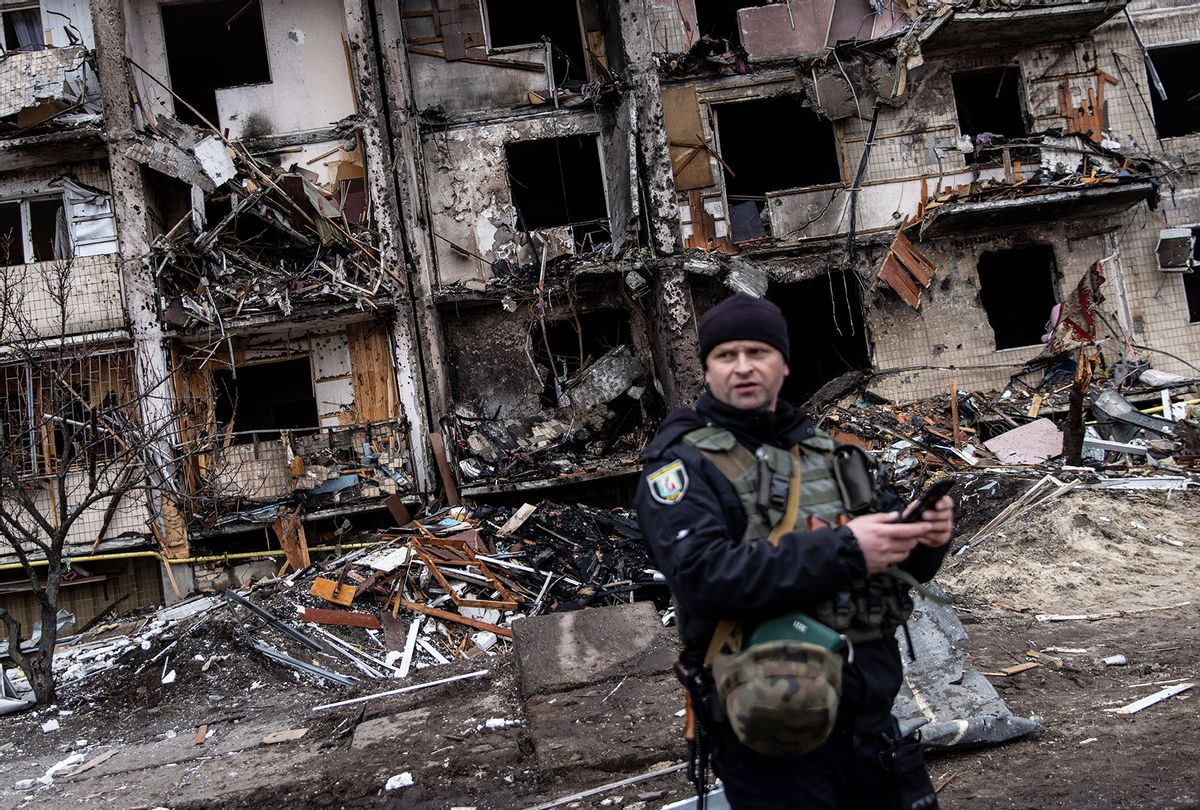 A Ukrainian police officer stands in front of a damaged residential block hit by an early morning missile strike on February 25, 2022 in Kyiv, Ukraine. Yesterday, Russia began a large-scale attack on Ukraine, with Russian troops invading the country from the north, east and south, accompanied by air strikes and shelling. The Ukrainian president said that at least 137 Ukrainian soldiers were killed by the end of the first day. (Chris McGrath/Getty Images)
--

Ukrainian President Volodymyr Zelenskyy implored people in the capital of Kyiv to brace for an all-out Russian assault overnight, and as a result of intense resistance from the Ukrainian military and civilians alike, they were able to fend off the invading army, though fighting continues throughout the country on Saturday morning.

"The invaders wanted to block the center of our state and put their puppets here... We broke their plan."

Just after midnight, Zelenskyy warned that Russian President Vladimir Putin's forces would storm Kyiv in "vile, cruel, and inhuman" fashion, according to a translation by Max Seddon, the Moscow bureau chief at Financial Times.

"We have to persevere tonight," said Zelenskyy. "The fate of Ukraine is being decided right now. The night will be hard, very hard, but there will be a morning."

After another excruciating night spent in bomb shelters, basements, and subway stations, the residents of Kyiv awoke with the city still in the hands of mayor Vitali Klitschko and the Ukrainian government still under Zelenskyy's control.

Several apartment units were destroyed by Russian missiles, and at least 35 people, including two children, had been wounded as of 6:00 a.m. local time, according to Klitschko.

The mayor added that while "there are no Russian troops in the city," people should remain underground as additional air attacks are expected.

As the BBC reported:

According to a report by the Interfax-Ukraine news agency, Kyiv officials put out a statement asking people to stay in shelters and to stay away from windows if they were at home.

But Secretary of the National Security and Defense Council Oleksiy Danilov told Ukrainian news site Lb.ua that the army was "in control" of the situation.

"We are stopping the horde using all means available. The army servicemen and citizens are in control of Kyiv," said Mr. Danilov.

According to BBC correspondent Paul Adams, "The Ukrainian army said it had repelled an attack along one of the main roads in the west, early [Saturday] morning. And it says it's managed to prevent a Russian attempt to land airborne troops at an airport south of Kyiv—even saying a large plane carrying troops had been shot down."

In a video recorded Saturday morning from the empty streets of Kyiv's government district and shared on Twitter, Zelenskyy countered rumors that he had directed the army to surrender to Russian troops.

"I'm here. We will not lay down any weapons. We will defend our state," he said.

According to the New York Times, "Reports on Friday from the Ukrainian military and the United States and its allies indicated that Ukrainian troops were fighting fiercely, slowing the Russian advance."

"Civilians were also volunteering to defend the country," added the newspaper, which interviewed several residents who have taken up arms.

In an address to Ukrainians on Saturday morning, Zelenskyy said that "we are defending the country, the land of our future children."

"Kyiv and key cities around the capital are controlled precisely by our army," the president added. "The invaders wanted to block the center of our state and put their puppets here like in Donetsk. We broke their plan."

Meanwhile, fighting continues throughout Ukraine, where Russia is being condemned for alleged war crimes.

Western governments have vowed to increase weapons shipments to Ukraine and impose harsher sanctions on Russia—including directly targeting the assets of Putin and Foreign Minister Sergey Lavrov—but Zelenskyy continues to urge all European Union members, including current holdouts Germany and Hungary, to disconnect Russia from the SWIFT international banking system.

For the first time in history, the North Atlantic Treaty Organization (NATO) on Friday activated parts of its Response Force.

United Nations Deputy High Commissioner for Refugees, Kelly Clements, told CNN on Saturday morning that more than 120,000 people had fled Ukraine "to all of the neighboring countries."

"The reception that they are receiving from local communities, from local authorities, is tremendous," said Clements. "But it's a dynamic situation, we're really quite devastated obviously with what's to come, and we would say that up to four million people could actually cross borders, if things continue to deteriorate, which they have until now."