Too much reality: Putin's Ukraine invasion summons Europe's dark past

Is Putin Hitler? It's the wrong question: He must be stopped long before we get anywhere near that point 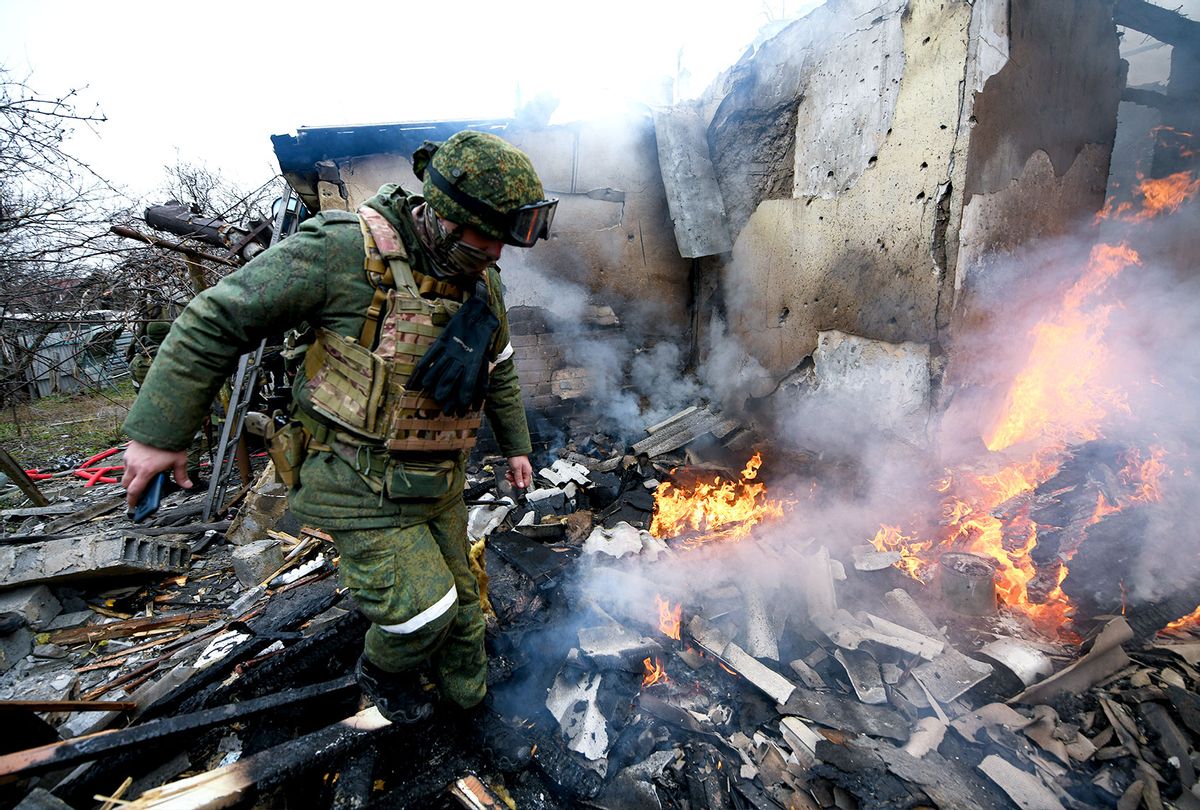 A view of damage due to armed conflict between Russia, Ukraine in Donetsk region under the control of pro-Russian separatists, eastern Ukraine on February 28, 2022. (Stringer/Anadolu Agency via Getty Images)
--

"Humankind cannot bear very much reality," T.S. Eliot once noted. Americans, especially, have what the historian Louis Hartz called a "vast and almost charming innocence of mind." But we can't afford any willed innocence about Russia's invasion of Ukraine.

Vladimir Putin has reduced Russia to a failed state that runs on thuggery, cyber-piracy, gas and war, and all this has been getting cover from Putin's longtime sycophant Donald Trump and his Republicans, not least through the recently concluded Conservative Political Action Conference. Putin must be stopped by force, and his American apologists must be thoroughly discredited, much as Hitler and Mussolini and their American apologists and collaborators were, even if doing so requires pain and sacrifice from the rest of us.

What T.S. Eliot called "very much reality" doesn't stop there.

Putin has suggested that Russian forces will round up and kill anyone who resists the invasion. He is trapped in the past, mourning the Soviet Union's collapse, whose redress, he believes, will be his legacy to Russia, it isn't hard to imagine Russian soldiers collecting Ukrainian resisters, including civilians in street clothes who fired guns or threw Molotov cocktails at Russian troops, and massacring them on Putin's orders.

Soviet soldiers did precisely that, on Joseph Stalin's orders, in April and May of 1940, when they massacred nearly 22,000 Polish army officers, police, landowners, factory owners, lawyers, officials and priests and left them in mass graves. (Many of the victims were Ukrainians and Jews, including the chief rabbi of the Polish Army.)

Of course it's true that most mass killings in Eastern Europe in that period, including the horrific massacres in Kharkiv, now Ukraine's second-largest city, were committed not by Russians but by the German occupiers after 1941. It's also true that many in the Soviet republics, such as Ukraine and the Baltic countries, welcomed the Germans at first as their liberators from the Soviet boot, and that many of their citizens collaborated with them in murdering Jews.

Photos taken by the Nazis in Ukraine in 1941 to document what they and some Ukrainians were doing, too horrifying for me to display here, can be seen easily enough at the United States Holocaust Memorial Museum in Washington. We don't know whether Putin could do anything similar to Ukrainian resisters.

I admit to being sensitive about this. Although my Lithuanian-Jewish grandparents came to America in 1909, they had siblings, cousins and elders who were terminated in 1941, in much the same way as the mass killings in Ukraine.

In 2002, I went to the sites where they'd been slaughtered, and I stood in a Lithuanian Jewish State Museum reading English translations of Nazi Einsatzgruppen reports about Lithuanians who worked with and for the Nazis. "Work" like that was done throughout Nazi-occupied Eastern Europe, as recounted in the historian Timothy Snyder's "Bloodlands" and in Jan and Irena Gross' "Golden Harvest," the latter showing how thousands of Poles raided the homes of Jews who'd been taken to slaughter, even extracting gold fillings from the teeth of the corpses.

The Einsatzgruppen documents report that some Lithuanians got drunk even while machine-gunning their victims under German supervision because they didn't "like the work" and wanted to dull their pain and disgust. A few even went AWOL.

I abhor what Putin is doing and threatening to do, and support Ukrainians' truly heroic resistance to it. They're also redeeming their country from part of its past by standing with a president who happens to be Jewish.

But I can't forget — and dread any renewed possibility — of the "very much reality," mentioned by Eliot, that's depicted in photos that perhaps we can't bear to see but no willed innocence of mind can prevent. Read the lines below from W.H. Auden, who felt it all coming in 1939, and then a few lines from me about an arresting moment I experienced in Berlin on Holocaust Memorial Day, more than a decade ago.

In the nightmare of the dark
All the dogs of Europe bark,
And the living nations wait,
Each sequestered in its hate;

Intellectual disgrace
Stares from every human face,
And the seas of pity lie
Locked and frozen in each eye.

Follow, poet, follow right
To the bottom of the night,
With your unconstraining voice
Still persuade us to rejoice;

With the farming of a verse
Make a vineyard of the curse,
Sing of human unsuccess
In a rapture of distress;

In the deserts of the heart
Let the healing fountain start,
In the prison of his days
Teach the free man how to praise.

To solace myself, I add some lines of my own, first published by the Washington Monthly in 2018. Some of it may appear outdated, but not by much.

Donald J. Trump isn't a Nazi, although his father came close. It's true that historical analogies between Trump's policies and Hitler's are often facile, and sometimes dangerously misleading. But here's one that I'm not inclined to shrug off.

During a long stay in Berlin in 2009, I went often to the Grunewald railway station to have my coffee. It's a picturesque little station, built in the 1899, fronted by a cobblestone square and surrounded by splendid, well-preserved villas of that period.

It's also the point from which more than 50,000 Berlin Jews were shipped to concentration camps, a few hundred a week, from 1942 to 1945. At the station's Track 17, a steel strip along the platform edge records, in raised letters, each week's shipment of several hundred "Juden" to Theresienstadt, Minsk, Riga, Kaunas, Łódź and, later, directly to Auschwitz and other death camps.

It's hard for most Americans, especially those of us whose parents fought in World War II, to imagine that people who boarded the trains had no idea of what lay ahead. Yet, although Jews had been vilified and some attacked on the streets since 1938, some things remained unthinkable to Berlin Jews, most of whom had been middle-class, law-abiding citizens since birth. They showed up at station on the appointed dates, children and luggage in tow, for what they'd been told would be deportation to resettlement and work centers. At worst, they expected something like what Japanese-Americans experienced in internment camps on our own West Coast during the same war.

Under the watchful eyes of German police, they took their seats in ordinary passenger coaches for many of these departures. Only later, far beyond Berlin, were they transferred to box cars. Some time after that, postcards they hadn't written were sent to relatives or acquaintances whom they'd listed with the authorities, assuring them that all was well in their new locations. ...

I recount this now because some Americans remind me of Berlin Jews who didn't think the unthinkable when they should have. After watching the Trump administration tear apart weeping parents and children — on the initiative of its senior policy adviser, Stephen Miller, who's Jewish — I'm thinking that although Trump has now found it politically expedient to halt the practice, more than a few of my fellow Americans were thinking, "Well, they deserve it, unlike me, a law-abiding citizen, and a veteran."

Those Berlin Jews had been law-abiding citizens, too, at least until 1935, and more than a few were military veterans: Some 12,000 of the Jews who had served in the German military had fallen in World War I. In an irony beyond ironies, it was a Jewish lieutenant, Hugo Gutmann, who secured an Iron Cross, First Class, for a 29-year-old corporal under his command, Adolf Hitler.

Read the rest of my historical analogy here.