Biden calls out the attack on democracy: But he didn't just mean Vladimir Putin

The president didn't directly mention Jan. 6 — but everyone watching knew his real target wasn't in Moscow 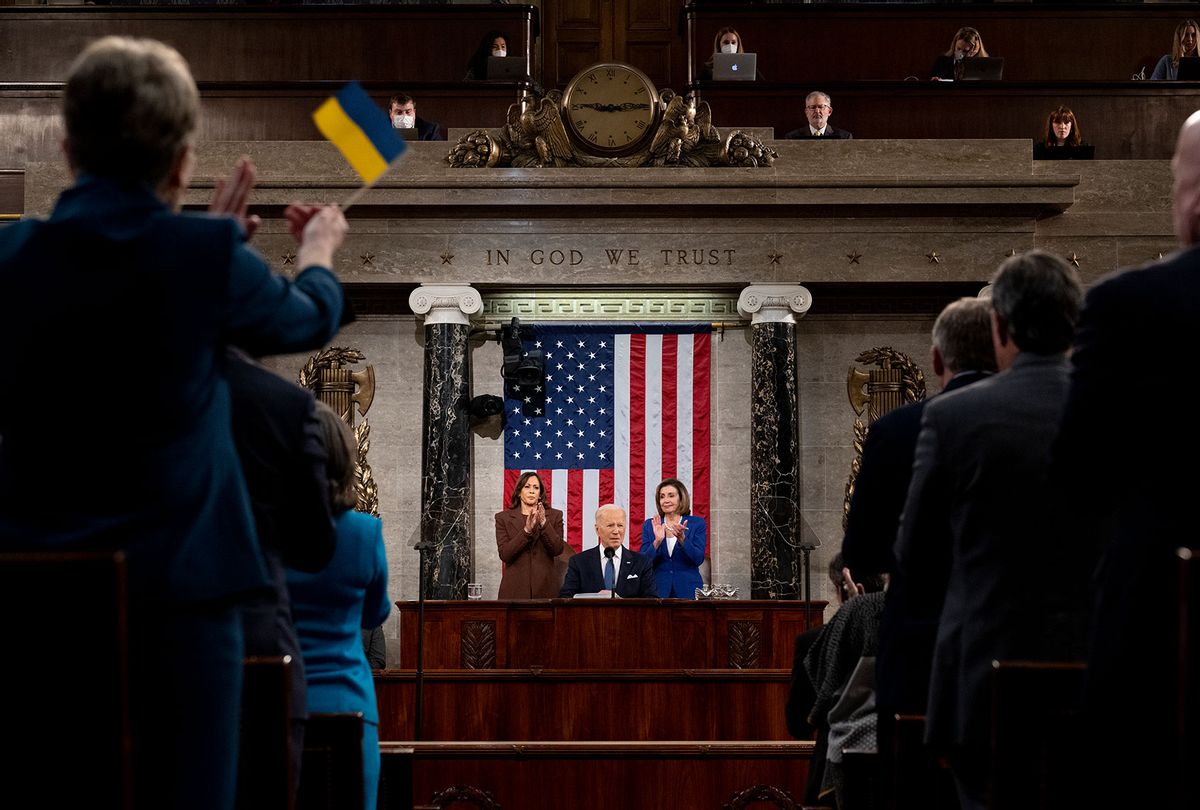 A member of the U.S. Congress waives a Ukrainian flag as President Joe Biden delivers the State of the Union address to a joint session of Congress in the U.S. Capitol House Chamber on March 1, 2022 in Washington, DC. In his first State of the Union address, Biden spoke on his administration’s efforts to lead a global response to the Russian invasion of Ukraine, work to curb inflation, and bring the country out of the COVID-19 pandemic. (Saul Loeb - Pool/Getty Images)
--

Last year, when President Joe Biden gave his address to a joint session of Congress, he was speaking to a world that had just witnessed a violent insurrection in which a mob had tried to stop the peaceful transfer of power. He said:

[A]s we gather here tonight, the images of a violent mob assaulting this Capitol, desecrating our democracy, remain vivid in all our minds. Lives were put at risk — many of your lives. Lives were lost. Extraordinary courage was summoned. The insurrection was an existential crisis — a test of whether our democracy could survive. And it did.

America's adversaries — the autocrats of the world — are betting we can't. ... They believe we're too full of anger and division and rage. They look at the images of the mob that assaulted the Capitol as proof that the sun is setting on American democracy. But they are wrong. You know it; I know it. But we have to prove them wrong.

For this year's State of the Union address, the president was speaking to a world that is witnessing Russia's unprovoked invasion of Ukraine, and the themes were not dissimilar. It is entirely possible that Biden's words last year were prophetic. That horrifying act of violence on Jan. 6, 2021, may have led Russian President Vladimir Putin to believe that the U.S. was so divided and had lost so much global influence that it would be unable to rally the world to take decisive action against his attack on Ukraine.

You can't blame him, honestly. Putin observed first-hand the inept fool we elected in 2016 turn the country into a clown show for four years, before making half the country believe that American democracy is a farce. He must have believed that America's long-standing alliances were so frayed by our former president's constant denigration and threats that they would never be able to work in concert again. He certainly could have assumed that the world was so battered by the global pandemic that few nations would bewilling to make the sacrifices that economic sanctions might mean for their own people.

It appears Putin was wrong about that. United global condemnation has been overwhelming and the economic response is unprecedented. Responsible American leadership appears to have been decisive in bringing that together.

Biden addressed the subject forcefully in his speech on Tuesday night. He opened with a stirring tribute to the Ukrainian people:

Six days ago, Russia's Vladimir Putin sought to shake the very foundations of the free world, thinking he could make it bend to his menacing ways. But he badly miscalculated. He thought he could roll into Ukraine and the world would roll over. Instead, he was met with a wall of strength he never anticipated or imagined. He met the Ukrainian people.

After years of Trumpian braggadocio, this was a refreshing demonstration of an American leader allowing people other than himself to be the object of admiration. And despite their sullen hostility, the Republicans in the chamber actually stood with Democrats to applaud him.

That was, of course, the reason that cowards like Sen. Marco Rubio of Florida refused to attend, citing the the COVID testing requirement as their laughable reason. They just didn't want to be seen either sitting or standing as President Biden spoke about the Ukraine crisis. As it happens, those who mustered the courage to attend ended up having to grit their teeth and stand up on five different occasions.

This covers most of what the president said in the speech about Ukraine. It was bracing, to say the least:

Attempting to rally the country for yet more economic turmoil was undoubtedly the last thing Biden wanted to do. It's likely that the measures he spoke about will make it more difficult to control inflation, which is the thorniest economic problem the world faces right now. Gas prices are bound to rise, with oil above $100 a barrel, and the cascading effects will be substantial. This will hurt.

But there really is no choice. Allowing Russia to invade Ukraine without responding would be foolish in the extreme. Direct military involvement by NATO forces is off the table — the alliance has no treaty obligations with Ukraine, and the threat of nuclear war is real — so economic sanctions and material support is the best way for Ukraine's friends to help. Fortunately, the global response has been overwhelming, reflecting the dawning realization among most countries in the world that the threat of antidemocratic authoritarianism is no longer theoretical.

That brings us back to where we are here at home. Other than speaking out for voting rights, Biden didn't bring up the insurrection in his speech this year. But it hung over the entire evening anyway. After all, it was only 14 months ago that those elected representatives were evacuated from the very chamber in which they sat on Tuesday night. It's impossible to ignore the fact that while the U.S. takes a bold stand against an authoritarian halfway around the world, an authoritarian here at home has successfully persuaded a large proportion of the public that the current president is illegitimate — and that authoritarian has not been held to account for any of his misdeeds. In fact, he will probably going to be the Republican presidential nominee two years from now.

The whole world is watching as the people of Ukraine fight for their democracy and their freedom. But we have a different fight for democracy right here at home. As former federal prosecutor Joyce Vance pointed out on MSNBC:

In the 2022 elections, there are election deniers — candidates who still contest the results of the 2020 election — running for governor in at least 24 states, for attorney general in 10, and for secretary of state, a key post for administering elections, in 18 states. States have adopted laws that make it more difficult to vote, for instance, by cutting back on early voting days and absentee voting.

Joe Biden made a compelling case for America and the world to stand up to Putin's aggression against Ukraine. Republicans  applauded along with Democrats as he said, "When dictators do not pay a price for their aggression, they cause more chaos, they keep moving — and the cost to America and the world keeps rising." But how many of those Republicans reflected on the fact that the president could have just as easily been speaking about them?

Read more on Biden, Putin, the Republicans and Ukraine: