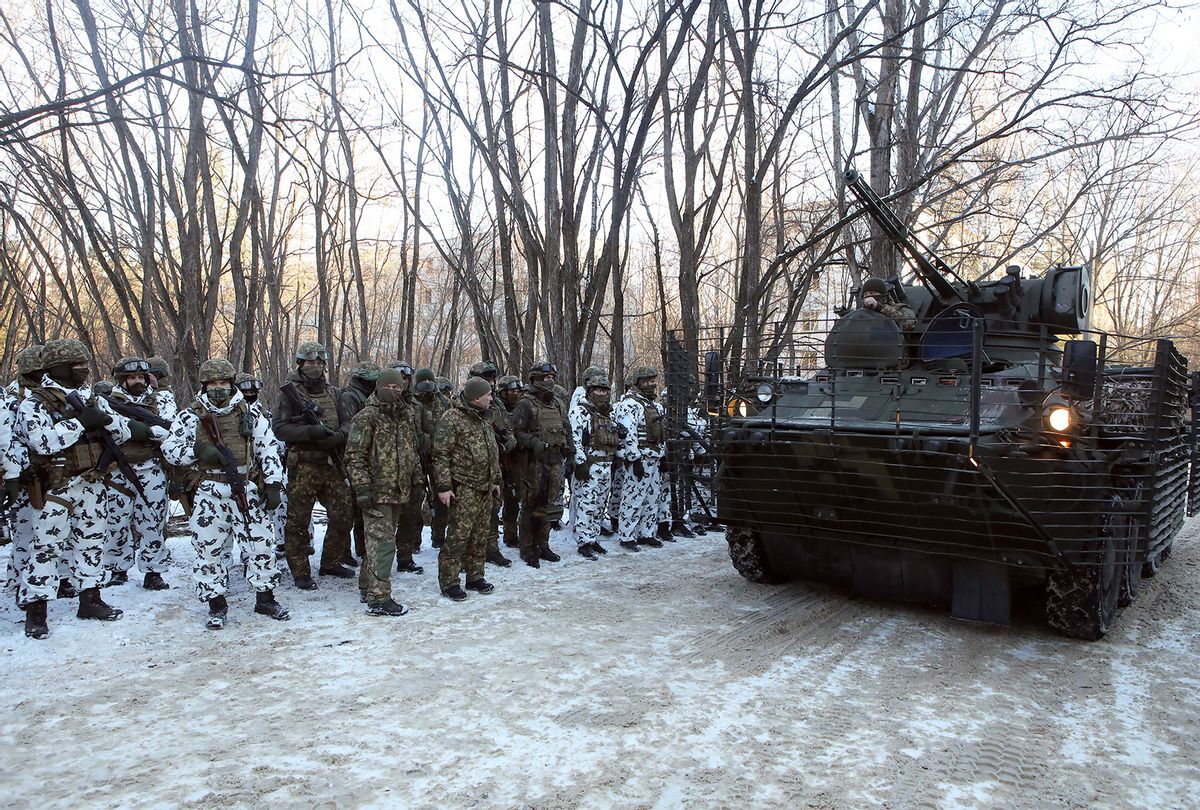 A military vehicle with spaced armour moves past servicemen during tactical drills for Ukrainian Interior Ministry units to practice interoperability while defending a city, urban combat tactics and response to the aftermath of the hostilities in a city, Prypiat, the Chornobyl Exclusion Zone, Kyiv Region, northern Ukraine. (Volodymyr Tarasov/ Ukrinform/Future Publishing via Getty Images)
--

The new assessment of Monday strikes on Kharkiv, an eastern city home to over 1.4 million people, is based on photos and video evidence verified by the human rights group and was presented as Russia faces increasing global condemnation over its ongoing invasion, which has stoked fears of nuclear disaster and has already forced over one million people to flee Ukraine.

HRW already confirmed last week use of cluster munitions by Russian forces in a February 24 strike just outside a hospital in the Ukrainian city of Vuhledar. The new assessment focuses on munitions that hit the Moskovskyi, Shevchenkivskyi, and Industrialnyi districts of Kharkiv on February 28.

The rights group—which noted the "inherently indiscriminate nature of cluster munitions and their foreseeable effects on civilians"—based its new assessment on interviews with two witnesses and an analysis of 40 videos and photographs, which revealed information on explosion signatures and remnants of the rockets.

Over 120 nations have signed on to an international treaty banning the use, transfer, and stockpiling of cluster munitions, which can pose deadly harm far beyond initial explosions, as unexploded submitions becoming akin to landmines. The Cluster Munition Caolition describes the weapons as being able to "saturate an area up to the size of several football fields."

Neither Russia, Ukraine, nor the U.S., however, is state party to the treaty.

"We are seeing mounting evidence of indiscriminate attacks on Kharkiv and the price civilians are paying for these serious violations," said HRW's Goose.

"If these deadly acts were carried out either intentionally or recklessly," he added, "they would be war crimes."

The head of the North Atlantic Treaty Organization (NATO) also said Friday that Russian forces have used cluster bombs in its attacks on Ukraine.

"We have seen the use of cluster bombs and we have seen reports of use of other types of weapons which would be in violation of international law," NATO Secretary General Jens Stoltenberg told reporters.

Amnesty International has also previously confirmed Russian forces' use of cluster bombs on Ukraine, and open source investigative outlet Bellingcat has also been tracking Russia's use of the weapons during the invasion.

In a Wednesday statement, the U.K. presidency of the Convention on Cluster Munitions expressed "grave" concern about reports of Russia using the weapons in strikes on Ukraine, noting that cluster bombs "have had a devastating impact on civilians in many conflict areas."

The Cluster Munition Coalition, in a Wednesday tweet, said, "We welcome the growing number of states speaking out on—and urge all states to condemn—the unacceptable use of cluster munitions by Russian forces in Ukraine."