The Trump investigations: What happened to them? 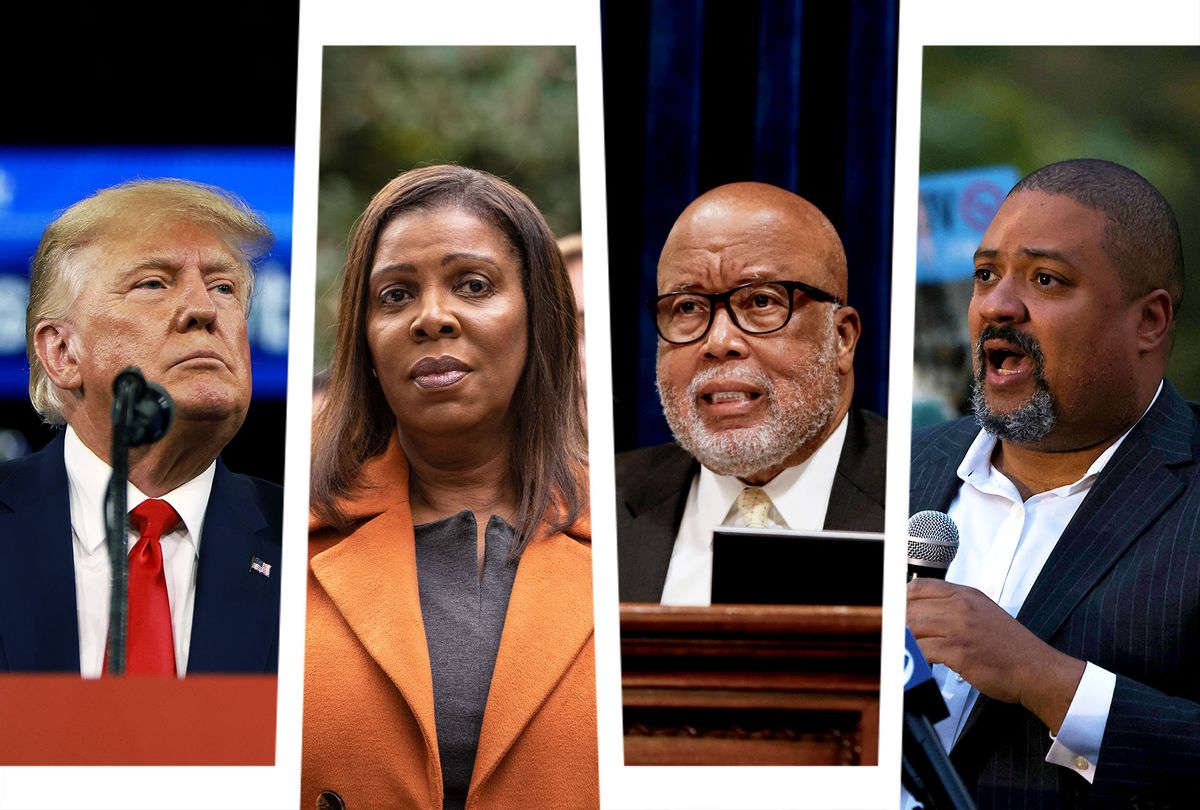 State and federal investigators across the country are still working to untangle Donald Trump's web of improprieties, pursuing a multitude of investigations that offer differing levels of promise in the legal arena. Currently, Trump faces nineteen active inquiries, although much of his focus has been devoted to just four. Let's take a deeper look at the four cases he has strenuously worked to extinguish at every turn.

In Manhattan, one probe is showing signs of letting up, all but dashing hopes that the president and many of his business associates will face criminal charges for their work in the Trump Organization. Still, the president is struggling to fend off a civil suit led by New York's attorney general. He also remains under state and federal scrutiny over his role in fomenting the January 6 Capitol riot and attempting to overturn the 2020 presidential election.

Last month, Salon provided a status update on all of these probes, but since then, many have developed in ways that bring greater clarity to the possible extent of Trump's corruption.

Let's start with the January 6 select committee, which on Wednesday publicly declared, for the first time ever, that it has enough evidence to believe that Trump violated multiple election laws in his crusade to reverse in the 2020 election.

"The Select Committee also has a good-faith basis for concluding that the President and members of his Campaign engaged in a criminal conspiracy to defraud the United States," the panel wrote in Wednesday court filing.

The declaration is by far the closest that the committee has come to laying out potential charges against the former president, putting all the more pressure on U.S. Attorney General Merrick Garland, who is actually defending Trump in several lawsuits, to take up the case.

The committee's court filing is largely a product of evidence gathered around ex-Trump legal advisor John Eastman, now notorious for concocting a specious scheme to have former Vice President Mike Pence reject certain electoral votes on the basis of Trump's election fraud claims. Perhaps the most damning piece of evidence in the filing, according to CNN, is a January 2021 email exchange between Eastman and Greg Jacob, then a top lawyer for Pence, who aggressively pushed back on Eastman's plan, arguing that it had no basis in constitutional law.

"I have run down every legal trail placed before me to its conclusion, and I respectfully conclude that as a legal framework, it is a results-oriented position that you would never support if attempted by the opposition, and essentially entirely made up," Jacob wrote to Eastman at the time. "And thanks to your bullshit, we are now under siege."

Eastman responded: "The 'siege' is because YOU and your boss did not do what was necessary to allow this to be aired in a public way so the American people can see for themselves what happened."

While the committee did recommend any charges, Norm Eisen, a senior fellow in governance studies at the Brookings Institution, told Salon that he believes the panel's recent filing portends poorly for Trump.

"I have taken the view – and I think this filing reinforces that view … that there's an adequate basis here for charging," Einstein said in an interview. "The evidence seems to be evolving in that direction. And this is another step in that direction."

Apart from Eastman, the committee also homed in a new coterie of Trump associates this week, subpoenaing six conservative lawyers who played key roles in Trump's failed campaign to reinstall himself as the president. Among them are Cleta Mitchell, a former Oklahoma state representative; former Kansas Attorney General Phillip Kline; Christina Bobb, a host on the pro-Trump One America News network; and three low-profile attorneys: Kenneth Chesebrom, Katherine Friess, and Kurt Olsen.

"The six individuals we've subpoenaed today all have knowledge related to those matters and will help the Select Committee better understand all the various strategies employed to potentially affect the outcome of the election," select committee Chairman Bennie Thompson, D-Mo, said on Tuesday. "We expect these witnesses to join the hundreds who have cooperated with the Select Committee as we work to provide the American people with answers about the violence of January 6th and its causes."

According to the panel's findings, Mitchell was on a call with Trump when he pressured the Georgia secretary of state to "find" just enough votes in Fulton County to tip the election in his favor. Kline, meanwhile, helped convene a meeting between the former president and 300 state legislators "in an attempt to disseminate purported evidence of election fraud," according to The New York Times. Friess, Chesebro, and Olsen allegedly liaised in similar capacities, drafting directives to have federal agencies seize voting machines and ginning up spurious legal theories about how the Electoral College could be reshuffled in Trump's favor.

Just this past quarter, the select panel reportedly spent $1.6 million dollars on its sweeping investigation, according to ABC News, indicating that the probe's activities are ramping up, with nearly 600 interviews and over 75 subpoenas. Still, the panel remains bedeviled by Trump's most uncooperative associates.

Last week, former Trump advisor Kimberly Guilfoyle abruptly ended a deposition with the committee midway through due to alleged ambiguity around the meeting's ground rules, as CBS News reported.

"Kim balked and said this isn't my understanding," one person familiar with the exchange told the outlet. Another person described Guilfoyle as "outraged" since she apparently thought the meeting would not amount to a formal deposition.

And this week, Roger Stone, Trump's former campaign advisor, filed a lawsuit against the panel in a move to block them from gaining access to his text and phone call logs. Stone is one of at least nineteen potential witnesses using the courts to stonewall the select committee's subpoenas, according to the Times.

RELATED: "Broke" and abandoned: Rudy Giuliani is reportedly now getting the cold shoulder from Trump

Meanwhile, Ivanka Trump, the former president's daughter, is reportedly in talks with the committee, which has yet to issue her a subpoena, over the possibility of sitting down to provide testimony, according to the Times. Ex-Trump attorney Rudy Giuliani, who may be verging on bankruptcy, is reportedly in a similar position, weighing whether to participate in an informal interview or a deposition.

As Trump and his associates remain embroiled in an escalating probe on Capitol Hill, they are also facing an aggressive civil inquiry in Albany, New York, where the state's attorney general, Letitia James, is uncovering more evidence around possible fraud that ran rampant within the Trump Organization.

Last month, New York Supreme Court Justice Arthur Engoron ruled that Trump, Donald Trump, Jr., and Ivanka Trump must agree to answer James' questions under oath, a significant victory for James' office, which had issued subpoenas to all three of them back in December and January. James' probe is specifically interested in the family business' accounting practices, which may have allowed the former president to overvalue and undervalue certain assets for tax, insurance, and lending reasons.

During Engoron's virtual hearing, the Times reported, Trump's lawyers reportedly grew so furious with the proceeding that the judge and his clerk had to call time-outs on several occasions, often "raising their hands in the shape of a T."

Trump, for his part, has repeatedly tarred James' probe as being politically biased. But Engoron said that the former president's claims "completely misses the mark," noting that the attorney general has found "copious evidence of possible financial fraud."

On Friday, Trump, who has appealed the ruling, successfully delayed the case by several months, pushing his appeals hearing to May.

Engoron's ruling came about a week after Trump's accounting firm, Mazars USA, claimed that ten years' worth of the Trump Organization's financial statements could not be relied upon.

"While we have not concluded that the various financial statements, as a whole, contain material discrepancies, based upon the totality of the circumstances, we believe our advice to you to no longer rely upon those financial statements is appropriate," the company wrote.

Further, Mazars has dropped the former president as a client, citing a "conflict of interest."

Though James' probe is no doubt ramping up, Trump appears to be weaseling his way out of a parallel criminal probe led by newly-elected Manhattan District Attorney Alvin Bragg.

Many saw that indictment as an indication that the case was progressing swiftly. But last week, two of Bragg's prosecutors abruptly resigned from their roles in the investigation, casting an unexpected pall over the case's general outlook.

According to the Times, their resignation came on the heels of a month-long pause in presenting evidence to a grand jury, the second one to be impaneled in the case. The prosecutors, Carey R. Dunne and Mark F. Pomerantz, reportedly held strong doubts about the case under Bragg, who allegedly took weeks to read their memos and often delayed meetings with both prosecutors despite the jury's looming expiration date in April, according to the Post. Bragg also reportedly raised doubts about pursuing Trump himself.

Last month, a spokesperson for Bragg disputed any speculation that the district attorney is not interested in the case, but has declined to provide any more details.

"We are grateful for their service," Bragg's spokeswoman, Danielle Filson, said of Dunne and Pomerantz. She added that the probe remains "ongoing."

Trump's civil and criminal probes in New York will likely be a long shot. But the former president is also facing another election probe in Atlanta, Georgia, which some commentators have said is the dark horse amongst all of the investigations.

The probe, led by Fulton County District Attorney Fani Willis, stems from a call made by Donald Trump in January 2021 to Georgia Secretary of State Brad Raffensperger. During the call, first leaked by the Post, the former president asked the state official to "find" just enough votes cast in Fulton County to tip the 2020 election in his favor. That request was widely seen as an attempt to pressure Raffensperger into breaking multiple federal laws by depriving his own state of a free and fair election. (In the end, Raffensperbger refused to take Trumps' request.)

Last February, Willis opened a formal inquiry into the call, calling it a matter of "high priority."

In her letter at the time, she wrote that the probe "includes, but is not limited to, potential violations of Georgia law prohibiting the solicitation of election fraud, the making of false statements to state and local government bodies, conspiracy, racketeering, violation of oath of office and any involvement in violence or threats related to the election's administration."

Since then, Willis has convened a special grand jury, and has said that the investigation will heat up over the summer.

Willis added: "But what I do think is within a year we will have all the information that we need."

The District attorney has also said that Trump will not be protected by presidential immunity, even if the call was made during his presidency.

It remains unclear whether Willis will ultimately charge Trump, though Eisen, the senior fellow at Brookings, said that hers is a "powerful potential case."

"We already have the most compelling evidence there, which is the tape of the Raffensperger call," he said, referring to his October analysis on the matter. "Georgia law…does not allow a candidate who has lost an election to say, 'Can you just find 11,780 votes that do not exist?' ​​Nor does it permit you to use the weight of office and the kinds of veiled and not-so-veiled threats of coercion that can be heard on that tape to attempt to eliminate the legitimate outcome of an election."