Florida Republicans are accusing LGBTQ people of "grooming," "sexual instruction," and bribing kids to be gay 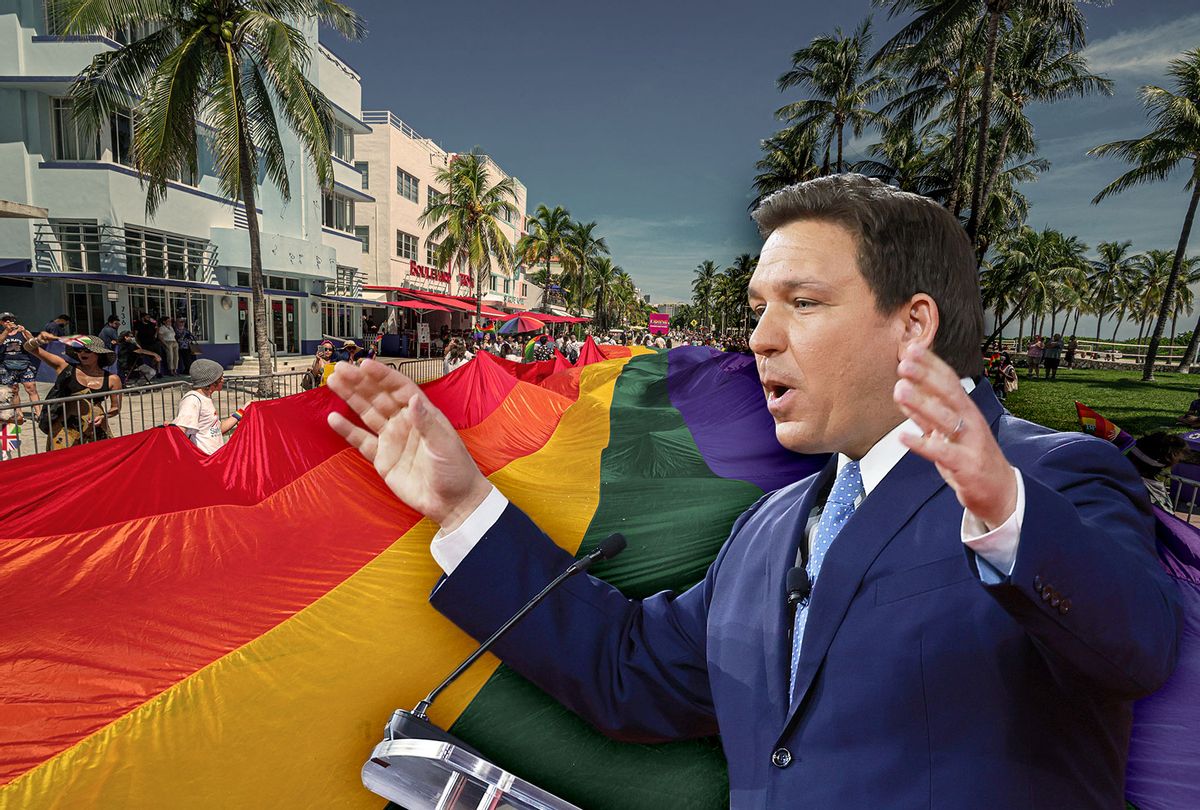 Even against an overwhelming backdrop of relentless GOP book banning and censorship attempts of recent months, Florida's "don't say gay" bill stands out from the crowd.

There are good reasons why the proposed legislation, which passed the Florida Senate on Tuesday, is drawing national attention and condemnation. The bill doesn't just ban teachers from allowing any acknowledgment of LGBTQ people in the classroom, it uses the novel "bounty hunter" system Texas used to ban abortion to allow parents to sue schools if, say, a teacher allows a kid with same-sex parents to talk about it in class. Even Kate McKinnon of "Saturday Night Live" jokingly weighed in on a recent "Weekend Update."

"So, like, one kid can say, 'I live with my parents,' but another one has to say, 'I live in a house with two adult men who bought me when I was young?'"

Despite all the public pressure, Florida Republicans pushed this bill through the legislature and sent it to Republican Gov. Ron DeSantis' desk on Tuesday morning. To make it even worse, Republicans, in their eagerness to get the "don't say gay" bill across the finish line, revived a repulsive, homophobic myth: That queer people are pedophiles who recruit children.

"The bill that liberals inaccurately call 'Don't Say Gay' would be more accurately described as an Anti-Grooming Bill," Christina Pushaw, DeSantis' longtime press secretary, wrote over the weekend on Twitter. She followed up by saying that anyone who opposes the bill is "probably a groomer." The term  "groomer," of course, is just another word for "child molester," as actual pedophiles are known to "groom" their victims before assaulting them. But (I can't believe this needs to be said in the year 2022) there is no evidence that LGBTQ people molest children at a higher rate than straight-identified people.

What Pushaw is doing here, of course, is dog-whistling to QAnon and their conspiracy theories accusing pretty much every Democrat around of being pedophiles and cannibals. She's harkening back to a "gays recruit" myth that is so old that many Americans haven't even heard it, or at least thought it died out long ago. The myth comes straight out of the 1970s.

In 1977, religious right icon Anita Bryant and her husband Bob Greene spearheaded a nasty campaign against a proposed Miami ordinance prohibiting job and housing discrimination based on sexual orientation. As the Washington Post at the time reported, the two argued that "passage of the law will enable homosexuals to 'recruit' youths." This myth allowed conservatives to deny that same-sex attraction — and later trans identities — are intrinsic with a side dose of implying that queer people are dangerous sexual predators.

Decades of LGBTQ people telling their coming out stories has done a great deal to destroy this myth, allowing the larger public to hear about how most queer people's identities come from inside. Indeed, most queer people's experience was massive pressure from others to be straight or cis, and having to overcome all the pressure to live as their authentic selves. And yet, as we're finding out from Florida Republicans, a lot of conservatives are still clinging to this idea that everyone is inherently straight and cis, and that the only reason people are queer is because they're "recruited."

DeSantis himself invoked the "gays recruit" myth on Friday, insisting that the bill just bans "sexual instruction" and "telling kids they may be able to pick genders." No one actually believes, of course, that kids are being given how-to lessons in sexual technique at any level of public school. This is just a dressed-up version of his press secretary's grotesque argument that merely acknowledging the existence of LGBTQ people is somehow sexual predation and "recruitment."

At the risk of feeding the troll, it's worth remembering that no one equates acknowledgment of straight people with "recruitment" kids into that lifestyle. If a children's book has a picture of a heterosexual couple getting married, this is not viewed as "sexual instruction." But, to hear DeSantis tell it, that same picture of a same-sex couple getting married is perverse, pornographic, and somehow "recruitment."

The bill's sponsor, Republican state Senator Dennis Baxley, also defended the censorship effort by invoking the "gays recruit" myth. During debate over the bill, he argued that LGBTQ kids are "just trying on different kinds of things they hear about." He went on to say coming out is like "maybe they're in this club or that club," and accusing kids of just being confused about who they are.

"All of a sudden overnight, they're a celebrity when they felt like they were nobody," he said, trying to explain why kids might feel they are LGBTQ. Notably, he did not consider the possibility that straightness is also something kids might try on and decide they don't like. The underlying assumption, always, is that straight identities are always authentic, and only queer identities are questionable. Which is an inverse of reality, where many queer people are coerced into pretending to be straight for years, or even decades, due to social pressure.

RELATED: Fighting back against CRT panic: Educators organize around the threat to academic freedom

The same "queers recruit" myth is underlying the new orders from Republican Gov. Greg Abbott of Texas for state agencies to investigate parents of trans children. By signing this order, Abbott is implying that trans kids are being pushed into their identities by overbearing parents, presumably for the same motivations — attention, accolades, woke points, whatever — Baxley assigned queer kids who come out in school. In reality, the vast majority, if not all, of these families follow the same path: The kid themselves starts asserting a trans identity, and the parents are affirming and supporting the child. In many cases, the parents are actually being pushed far out of their comfort zone in doing so, but love for their child is overcoming their doubts and confusion.

It is worth, also, noting that the people being targeted for state "investigation" (read: abuse) are only following the standard care recommended by the American Academy of Pediatrics. These parents are consulting with medical professionals and experts before moving forward with the plan to affirm a gender identity in a child who doesn't agree to the one they were assigned at birth. And in doing so, most parents are giving up a lot, often including the name they gave their child. That's an act of love and acceptance, not "abuse" or "recruitment."

But it almost feels pointless to argue these points.

Most of the Republicans reviving the "queers recruit" myth know full well it's a lie. What they want is not to protect children, but to harm children. This bill is intended to force teachers to shame and marginalize kids who are either LGBTQ, have family members who are, or, in some cases just don't want to conform to rigid gender roles by being boys who like pink or girls who play sports. In other words, Republicans want to bring back the closet. And they want to coerce teachers, on pain of being sued or fired, to play the role of right-wing gender police.