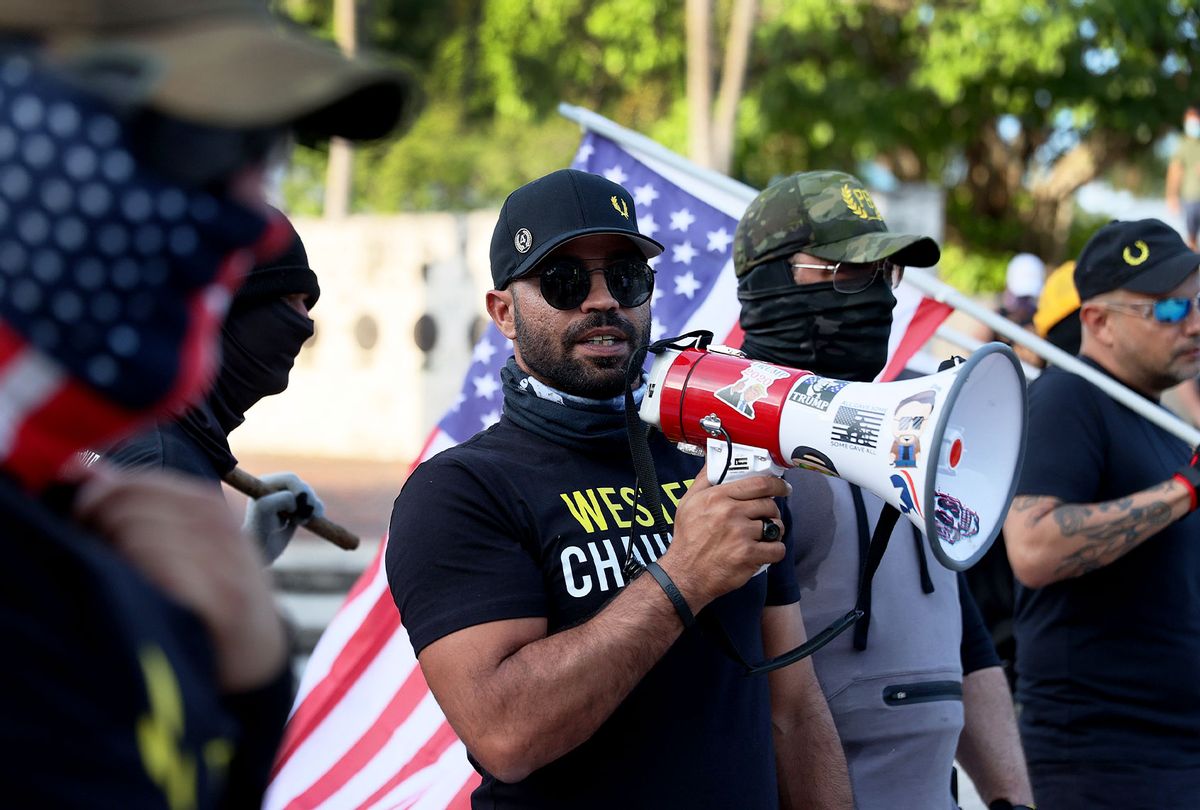 Enrique Tarrio, leader of the Proud Boys, uses a megaphone while counter-protesting people gathered at the Torch of Friendship to commemorate the one year anniversary of the killing of George Floyd on May 25, 2021 in Miami, Florida. (Joe Raedle/Getty Images)
--

Enrique Tarrio, the onetime chairman of the far-right Proud Boys, had been indicted on conspiracy charges related to his alleged role in coordinating the January 6 Capitol riot.

According to a federal indictment unsealed on Tuesday, Tarrio is the fifth Proud Boys lieutenant to face charges related to the insurrection alongside Ethan Nordean, Joseph Biggs, Charles Donohoe and Zachary Rehl.

In a press release, the DOJ said that Tarrio "[directed] and [encouraged] the Proud Boys prior to and during the events of Jan. 6, 2021, and … he claimed credit for what had happened on social media and in an encrypted chat room during and after the attack."

Tarrio was not in Washington, D.C. on the day of the Capitol riot. However, he was arrested and charged two days earlier for burning a stolen Black Lives Matter flag. Tarrio was also charged with illegally possessing two high-capacity rifle magazines, and was ordered by a judge to leave D.C. Last summer, Tarrio pleaded guilty to the charges and was sentenced to five months in prison.

Tuesday's indictment specifically charges Tarrio with conspiracy to obstruct an official proceeding – which, in this case, was the election certification ceremony.

During the leadup to the insurgency, Tarrio reportedly told his followers to dress "incognito" to avoid being identified by law enforcement, according to The New York Times. Tarrio also reportedly participated in a private chat on Telegram to help plan the attack with other leaders in the group, including Nordean and Joe Biggs, who also faces charges of his own.

According to the indictment, Tarrio allegedly exchanged messages with a man who was identifying "crucial buildings" to occupy during the riot to "show our politicians We The People are in charge."

"The revolution is (sic) important than anything," the man told Tarrio.

"That's what every waking moment consists of … I'm not playing games," Tarrio responded.

The indictment additionally ties Tarrio to Stewart Rhodes, the far-right founder of the Oath Keepers who back in January was accused of seditious conspiracy, according to The Washington Post. On January 5, the indictment alleges, Tarrio had a thirty-minute meeting with Rhodes and a number of unnamed participants in "an underground parking garage."

Rhodes, for his part, has pleaded not guilty, alleging that he never entered the Capitol. He remains in jail as he awaits trial.