From Ukraine to the War on Terror: For nations who start wars, the refugees disappear

Whether in Russia now or America after 9/11, for nations that make war, the victims of aggression become invisible 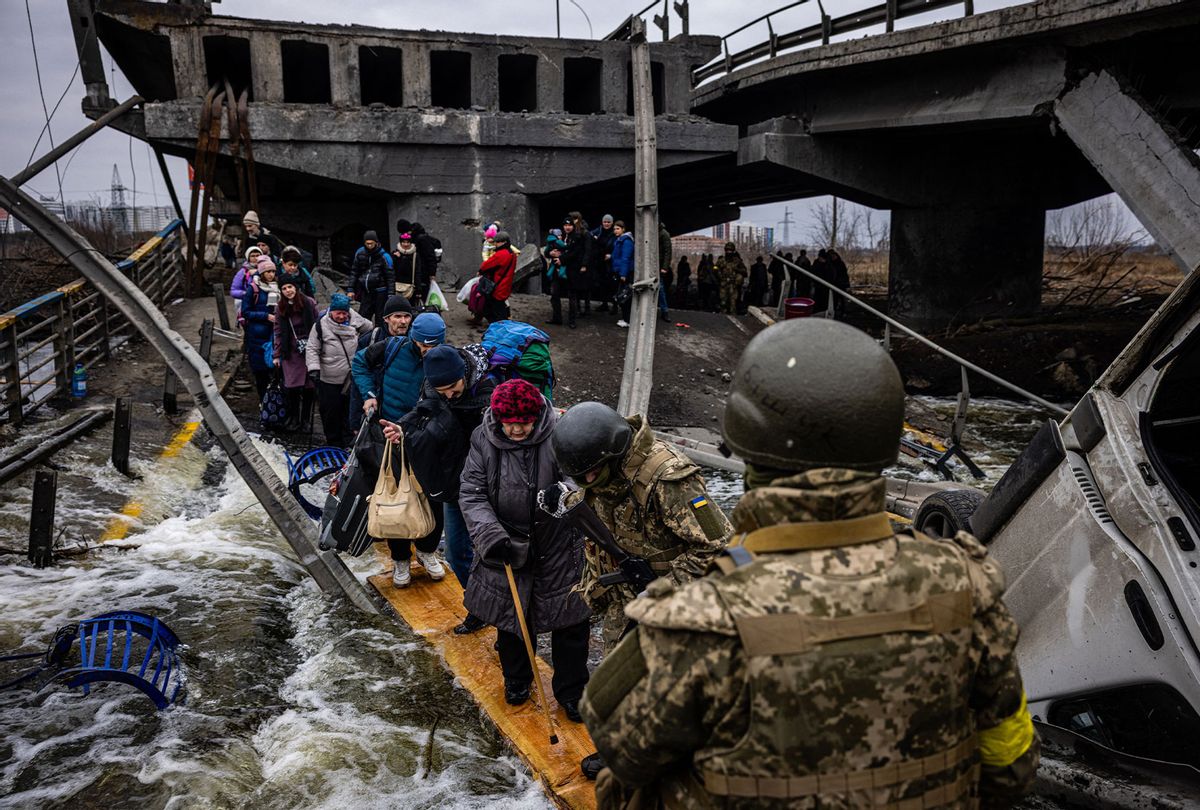 Evacuees cross a destroyed bridge as they flee the city of Irpin, northwest of Kyiv, on March 7, 2022. - Ukraine dismissed Moscow's offer to set up humanitarian corridors from several bombarded cities on Monday after it emerged some routes would lead refugees into Russia or Belarus. The Russian proposal of safe passage from Kharkiv, Kyiv, Mariupol and Sumy had come after terrified Ukrainian civilians came under fire in previous ceasefire attempts. (DIMITAR DILKOFF/AFP via Getty Images)
--

A March 6 New York Times article entitled "Ukrainians Find That Relatives in Russia Don't Believe It's a War" provides accounts of Ukrainians — distressed and in the midst of evacuations — calling their Russian relatives. They find out that their relatives tend to deny that bombs are raining on Ukraine, and revert to Russian propaganda on the need of Russia to liberate the country from a gang of drugged-up Nazis.

The surrealism and callousness of these Russian reactions are extreme, but the underlying mechanisms are more common than one might think. For populations within states that undertake massive military aggression, the victims of this aggression often become invisible.

RELATED: Ukraine and the dark lessons of war: What does it mean to "take" a country or a city?

In Ukraine, the imperial aggressor is Russia. In the many tangled theateRs of the War on Terror, the common belligerent is the United States. To the U.S. population — as well as the citizen of Western countries that have provided armaments, infrastructure and diplomatic support for these wars — the people displaced in the context of the War on Terror, for example in Yemen and even Iraq, have been all but invisible, even though the number of the displaced is staggering, even historically unprecedented: As leading researchers of the Brown University's Costs of War project calculated, the war on terror displaced at least 37 million people, and perhaps as many as 59 million. This number exceeds the number of displaced people in every war since 1900, with the exception of the displacement generated by World War II.

The calculations to arrive at the number of these displaced people, which has been ignored by the global media, are based on a robust methodology. The researchers admit that the events leading to displacement involve a multitude of actors and causes. But they have been at pains to ensure that the displacement that they identified is caused by fighting that involves the U.S.: In Syria, for instance, the researchers only counted the displaced from five provinces where U.S. forces have carried out military campaigns since 2014.

The experience of displacement is characterized by trauma, bereavement and fear, no matter who caused it. However, the types of processes that render displacement and suffering invisible differ in the west and Russia. In Russia, a top-down propaganda system steered by the Kremlin squashes all dissenting information. There is reporting on the abuses of the War on Terror in the West, but it is often decontextualized and criticism tends to identify specific abuses, depicting them as aberrations that don't diminish the generally benign intentions of the West — the overall pattern of massive displacement unleashed by the War on Terror notwithstanding. Our system of manufacturing consent is less crude, but very effective.

Our responsibilities towards the displaced are often unmet: As the continuous defunding of the UNHCR — the UN agency for bringing relief to the world's displaced — shows, the people displaced by Washington's counterinsurgency strategists and proxy warlords the world over live in a state of humanitarian austerity, with minimal educational, sanitary and health care services as well as protection in these pandemic times. Funding UNHCR would only require a fraction of the funding of military budgets that are skyrocketing across the West.

Looking in the mirror as we are confronted by images of the horrors of war and displacement in Ukraine, and calling out our responsibilities as taxpayers and citizens in war economies, should not always be derided as acts of whataboutism. But it's a fine balance: As we think about the parallels and difference between Russian and American aggression, we need to repudiate Kremlin attempts to gaslight people shocked by the suffering of Ukrainians. We owe solidarity to the victims of Russian aggression and escalations — as well as to the victims of the violence that our own societies unleashed.

Read more on the Ukraine conflict and how we got here: