There is no "Putin wing" of the GOP: Why almost no Republican backs Ukraine over Russia

Republicans may say they oppose Putin, but they keep siding with the Russian dictator over Democrats and democracy 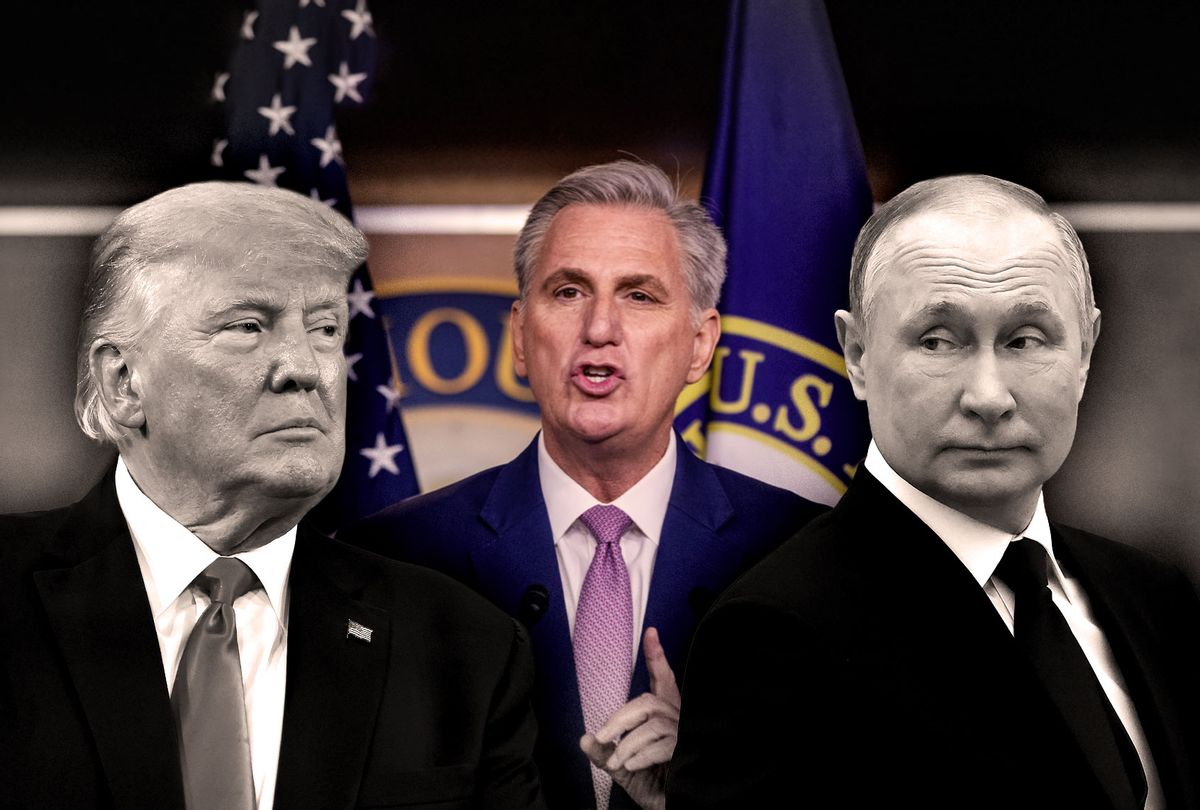 Over the weekend, Rep. Liz Cheney, R-Wyo., threw out an enticing coinage for some of the most flagrant supporters of Russian President Vladimir Putin in the Republican Party: The "Putin wing."

Cheney was specifically reacting to Douglas MacGregor, who was appointed to be a senior advisor to the Secretary of Defense by Donald Trump, and on Fox Business said that Russian forces invading Ukraine were being "too gentle." Most folks, however, took Cheney's new term to be much broader than that to encompass Donald Trump, Tucker Carlson of Fox News, and any Republicans who were praising Putin before it became suddenly unfashionable to do so approximately two weeks ago. Most of those folks are, reluctantly, claiming disapproval of the invasion of Ukraine, but are likely biding their time until outrage subsides and they can start pushing a pro-Putin line again. Indeed, Carlson has already started to test the waters by accusing the U.S. of victimizing Russia with a "disinformation campaign".

So the problem with Cheney's formulation is that to talk about a "Putin wing" of the GOP implies there is a substantive wing of the GOP that is anti-Putin. But outside of a few Republicans like herself that have turned their backs completely on Trump, that's simply not the case.

Oh, sure, there are lots of Republicans who talk a big game about how they support Ukraine and oppose the Russian dictator. House Minority Leader Kevin McCarthy even made a big show of declaring, "I do not think anything's savvy or genius about Putin," a direct refutation of Trump's repeated application of both words to the Russian leader he clearly has a crush on. McCarthy is known for his shameless boot-licking of Trump, so he was no doubt aware that this would result in "man bites dog" coverage that would make him appear anti-Putin without him having to make any changes to GOP actions that are, in reality, supportive of Putin's hostility to Ukraine and to democracy in general.

When we look away from the pretty words to those actual actions, the picture looks bleak indeed.

At best, Republicans will side with Putin's interests if doing so will undermine President Joe Biden and the Democratic party. Look no further than the bad faith GOP campaign over gas prices. As Dana Milbank of the Washington Post explained Wednesday, "For days, Republicans called for a ban on imports of Russian oil," but the second that Biden heeded their demands, they pivoted to "blaming his energy policies for spiking gas prices."

In one sense, this is standard GOP sabotage. We saw it under Barack Obama, where Republicans undermined the passage of a more robust economic bailout package, and then campaigned against Obama by blaming him for the sluggish recovery they caused. We saw an even darker version of this in the past year, with Republicans sabotaging Biden's attempts to end the pandemic by convincing their followers not to vaccinate, all so they can run against Biden's "failure" to end the pandemic. Pressuring Biden to pass a policy that everyone knows will raise gas prices, and then campaigning against him on those rising gas prices is standard operating procedure for the GOP.

But, in doing so, they are giving a huge assist to Putin, by letting him off the hook for the economic fallout his invasion of Ukraine is causing.

McCarthy in particular has been eager to carry Putin's water on this front, declaring bluntly that these "aren't Putin prices," but are instead "President Biden's prices." This isn't just a lie. This is a lie that, Milbank explains, is "sowing division at home and giving a rhetorical boost to the enemy at a perilous moment when national unity and sacrifice will be needed to prevail against Russia." Given a choice between backing Putin's play and scoring points on Biden, Republicans picked the former. It's all the more reason to view surface-level anti-Putin rhetoric from Republicans as glib bad faith that will likely, in due time, give way to accommodating Trump's obvious preference, which is a robust pro-Russia and anti-democracy stance.

We've been down this road so many times before, where Republicans initially resist Trump's horrible views but eventually come around. We saw it with Covid-19, where an initial Republican willingness to embrace pandemic mitigation swiftly turned into the rejection of even the most basic measures, all because then-president Trump thought acknowledging the reality of the pandemic would hurt his re-election chances. We saw it again with Trump's January 6 insurrection. Initially, most Republicans were freaked out and angry about it, but in short order, they were covering up Trump's crimes by voting against his impeachment and trying to shut down any House investigation into the attack.

We've even been down this road with Putin and his aggression towards Ukraine before. Republicans were initially willing to take seriously the strong signs that the Trump campaign was colluding with the Russian government to spread disinformation about Hillary Clinton during the 2016 election. They even went so far as to appoint a special counsel Robert Mueller to investigate the claims. But by the time Mueller's report was ready to come out, Republicans were in full cover-up mode, backing then-attorney general Bill Barr's strategy of burying the report's findings through delays and spin.

And when Trump tried to blackmail Ukrainian President Volodymyr Zelenskyy by threatening to withhold military aid unless Zelenskyy falsified evidence to smear Biden with, Republicans had Trump's back, voting against impeachment and undermining the process of holding him accountable at every turn. Instead, both Fox News and GOP leadership started to float Russian-generated conspiracy theories incoherently accusing Ukraine's government of "interfering" with elections, all to keep the heat off both Putin and Trump. As Heather "Digby" Parton notes, "Putin even joked at one point that he was glad the world was finally blaming Ukraine instead of him."

And as Donie O'Sullivan at CNN reports, now some conservatives are embracing a Russia-generated conspiracy theory claiming "the United States is developing bioweapons in Ukraine and Vladimir Putin has stepped in to save the day and destroy the weapons." The conspiracy theory bubbled up in the world of QAnon, but like most of these far-right conspiracy theories, it's making its way to the mainstream GOP rapidly. Carlson's show Wednesday night was largely dedicated to pushing this conspiracy theory that paints Ukraine as villains in cahoots with the Biden administration, and Putin as the hero. Even more troublingly, he used a clip of Florida's Republican Sen. Marco Rubio questioning Victoria Nuland, Biden's Under Secretary of State for Political Affairs, to hype this conspiracy theory. In the clip, Rubio's line of questioning seems about debunking the conspiracy theory. He even explicitly uses the term "Russian propaganda." Nonetheless, the clip went viral in pro-Russia circles, because Rubio opened the line of questioning by asking, "does Ukraine have chemical or biological weapons," prompting Nuland to say, "Ukraine has biological research facilities" and the U.S. is "working with the Ukrainians on how they can prevent any of those research materials from falling into the hands of Russian forces." The clip is now being spread around, including by Carlson, as evidence that the Ukrainians are the bad guys and the U.S. is covering up this supposed nefarious biological weapons development scheme.

RELATED: Trump's Ukraine call was referred to DOJ as possible crime. Barr's team shut it down

Perhaps Rubio was unaware that this clip would be used this way. If so, it's the second time this week that Rubio had an "oopsie" when it comes to Ukraine and Russia. Over the weekend, Rubio tweeted out a photo of a Zoom meeting Congress had with Zelenskyy, even though they were explicitly asked not to, in order to protect the Ukrainian president from what appears to be a relentless campaign by Russian forces to kill him. The photo is likely not a direct threat to Zelenskyy any longer, but Rubio still doesn't have the decency to take it down as a show of good faith.

Whatever Rubio's intentions, the pattern is hard to ignore: Republicans are careless at best when it comes to Ukraine, and when it comes to propagandists like Carlson — who always seem to end up setting the party's agenda — it's more like open sabotage of the embattled democracy.

Even the GOP's anti-vaccine strategy is coming back to hurt the Ukrainian cause. A Navy ship the U.S. wishes to deploy, likely to support NATO defenses in European waters, is being stalled because a Republican judge won't let the Biden administration remove the commanding officer. The officer lost the trust of the government and his crew by being an anti-vaccine conspiracy theorist. "Anti-vaxx nut" is apparently a protected class to Republicans now, so they're willing to tank national security in order to perpetuate this conspiracy theory.

Republicans are making their priorities clear. Sure, they say they believe in Ukraine's fight for democracy and sovereignty, but they're not willing to do much to stand up for that cause, especially if doing so means playing nice with Biden or, at the very least, not giving wild-eyed Putin lovers grist for their mills. It's the same problem we've seen with Republicans and Trump for years. Sure, some of them will criticize him or, however briefly, push back against some of his nuttier ideas. But when push comes to shove, Republicans will always stand by Trump's side, even though he literally attempted to overthrow American democracy. So why shouldn't they have the same approach to Putin's attempts to overthrow Ukrainian democracy?