Trumpists thought the invasion of Ukraine would be a fascist triumph, but now they're backpedaling 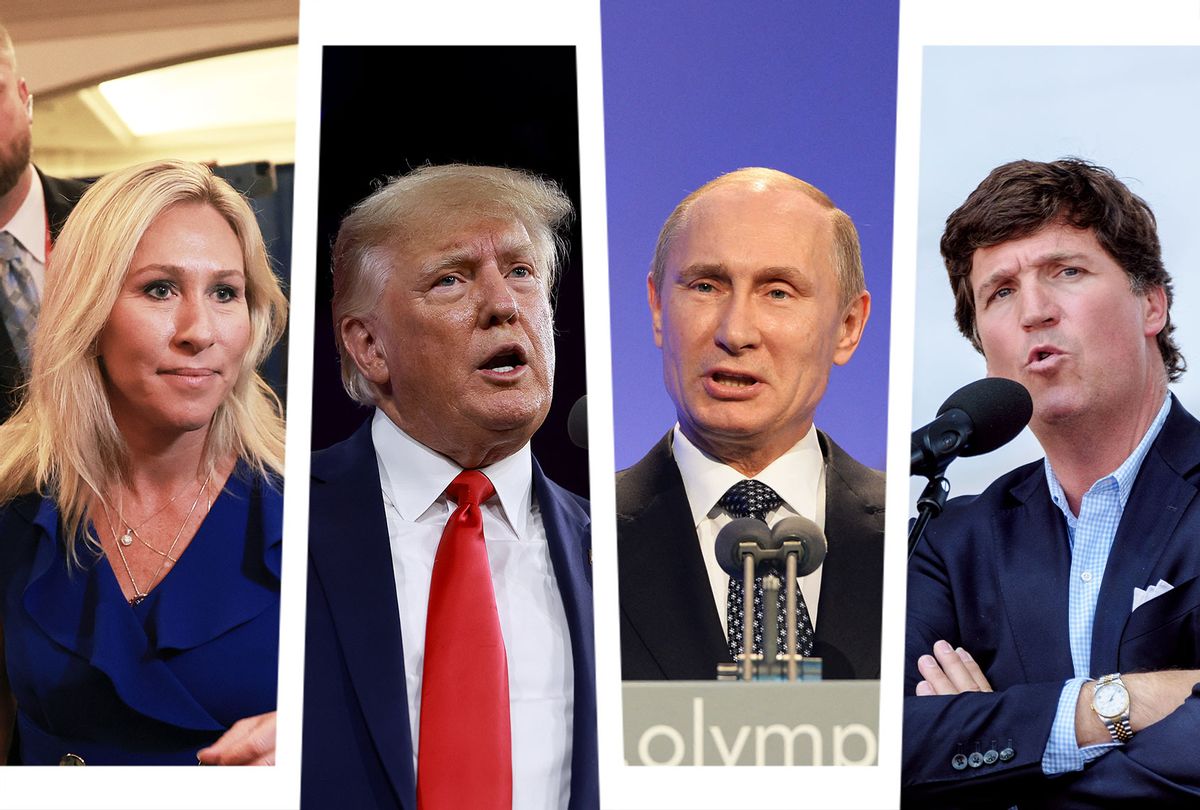 Going into the weekend, Donald Trump and his allies were feeling themselves, after Russia's President Vladimir Putin ordered a full-scale invasion of Ukraine. Clearly, Trumpists thought this was the moment to press their advantage, praising Putin and doubling down on overt white nationalist and fascist sentiment at home.

Trump spent the week gushing over Putin, calling him a "genius" and insisting he's "playing Biden like a drum." Tucker Carlson of Fox News argued that the only reason Americans hate Putin was because they were victims of a propaganda campaign and that the real enemy was liberals at home. Anchors on Fox News repeatedly contrasted the supposed decadence of a "woke" American culture with the "serious civilization" of Russia's authoritarian government. Rep. Marjorie Taylor Greene, R-Ga., made a surprise appearance at a white nationalist event Friday night. Right before and after her speech, the openly racist organizer, Nick Fuentes, led the crowd in a chant of "Putin, Putin" and praised Adolph Hitler.

For Trump and his authoritarian buddies, Russia's invasion of Ukraine must have felt like a turning point in the global war on democracy. But that moment of triumph very quickly faded. They had clearly underestimated the strength of both the Ukrainian resistance and the worldwide outpouring of pro-democratic sentiment that the war has inspired. The sanctions against Russia are looking like they're going to cause serious damage, and even many of Putin's strongest allies are jumping ship. Trumpists started backpedaling with an almost comical speed.

RELATED: "I have morons on my team": Mitt Romney blasts radical Republicans in Congress

Carlson has switched tactics, however temporarily. He now insists that he believes that Putin "is to blame for what we're seeing tonight in Ukraine." During a Saturday speech at the Conservative Political Action Conference (CPAC), Trump claimed to believe that the "Russian attack on Ukraine is appalling" and "an outrage and an atrocity." Taylor Greene, meanwhile, tried to play dumb about the meaning of her appearance at the openly racist America First Political Action Conference, claiming, "I do not know Nick Fuentes" and "I am not aligned with anything that is controversial." Instead, she pretended that her purpose at a white nationalist conference was merely about reaching out to his "young, very young, following" because it's "a generation I am extremely concerned about."

Taylor Greene is, of course, not telling the truth, as a photograph of her posing with Fuentes was soon circulated. But even without that, the idea that she did not know what she was signing up for or could not hear the chants of "Putin Putin" before she spoke is, at best, implausible. Indeed, despite her supposed unawareness of the white nationalist nature of the event, she hasn't held back from promoting her appearance there, posting snippets of her speech on Instagram.

Taylor Greene is playing peekaboo, pretending one moment to one audience not to be a fascist, while signaling her true intent at other times to other audiences. Trump and his allies are playing the same game when it comes to Putin. Even during his speech where he formally denounced the invasion of Ukraine, Trump winkingly gestured towards his true feelings, reiterating his belief that Putin is "smart" and "playing Biden like a drum."

RELATED: Trump is not confused about his bromance with Putin

Talking out of both sides of their mouths is a common tactic with authoritarians. It allows them to communicate their true views to the people who they want to hear them. At the same time, they construct a facade of plausible deniability so they can keep accessing mainstream politics — at least until such time as their fascist views become mainstream enough that they feel comfortable being more out about it.

Over the past week, it's easy to see how this strategy plays out in real time.

During the period where it seemed Russia's triumph over Ukraine would be swift, Trump and his fellow travelers pulled back the veil, seizing the moment to push anti-democratic sentiment more into the mainstream. But once Russia's hand got shakier, they dropped the veil back over their pro-Russia, pro-fascist sentiment, so as to maintain a claim to be within the mainstream of American politics. But, crucially, they never drop the veil so much that their followers will doubt their commitment to authoritarianism.

The non-stop whining about "cancel culture" helps construct the narrative that justifies peekaboo politics to their followers.  The implication is that they'd love to come right out and say what they really think, but the supposed power that be won't let them. Indeed, Taylor Greene's speech focused heavily on this narrative, praising the attendees of the conference as "canceled Americans."

Trump's alleged attempt to create a social media network of his own employs the same narrative. It's literally called "Truth Social," with the implication being that it's about preserving supposed truths that are being purged from Twitter and Facebook. Sure enough, Fuentes quickly became a verified member, putting his openly white nationalist beliefs and Nazi apologetics into the realm of the "truths" that Trump is protecting. This allows Trump to have it both ways. He can use Fuentes to signal unapologetic fascism to his base, while avoiding saying this stuff directly himself.

RELATED: Jelani Cobb on the anti-CRT campaign's high stakes and the deep roots of fascism in America

As the past week showed, Trump and his supporters will push the fascist rhetoric as far as they think they can get away with. When they thought that the resistance to Putin would be weak, they were gung-ho for the man and his invasion of Ukraine. Now that the Putin apologetics aren't muddying the waters as much as they'd hoped, they're pulling back and biding their time for another opportunity to once again aggressively mainstream authoritarian politics.

What's crucial to understand is this game of peekaboo is incredibly effective at communicating the underlying sentiment, which is that democracy is bad and fascism is good, to the conservative base. It's unlikely many people are truly confused about how Trump or Carlson or Taylor Greene feel about Putin or white nationalism in general. The only question is how much they feel they can be honest about it in public. But playacting the put-upon victims who aren't "allowed" to let their true feelings rip communicates their views well enough without them coming out and saying it. When playing peekaboo, the fascist doesn't just disappear because they put their hands in front of their face.

CPAC opens and immediately devolves into GOP dissent over Ukraine