The family of the murdered "van life" woman filed a suit against the parents of her killer, Brian Laundrie 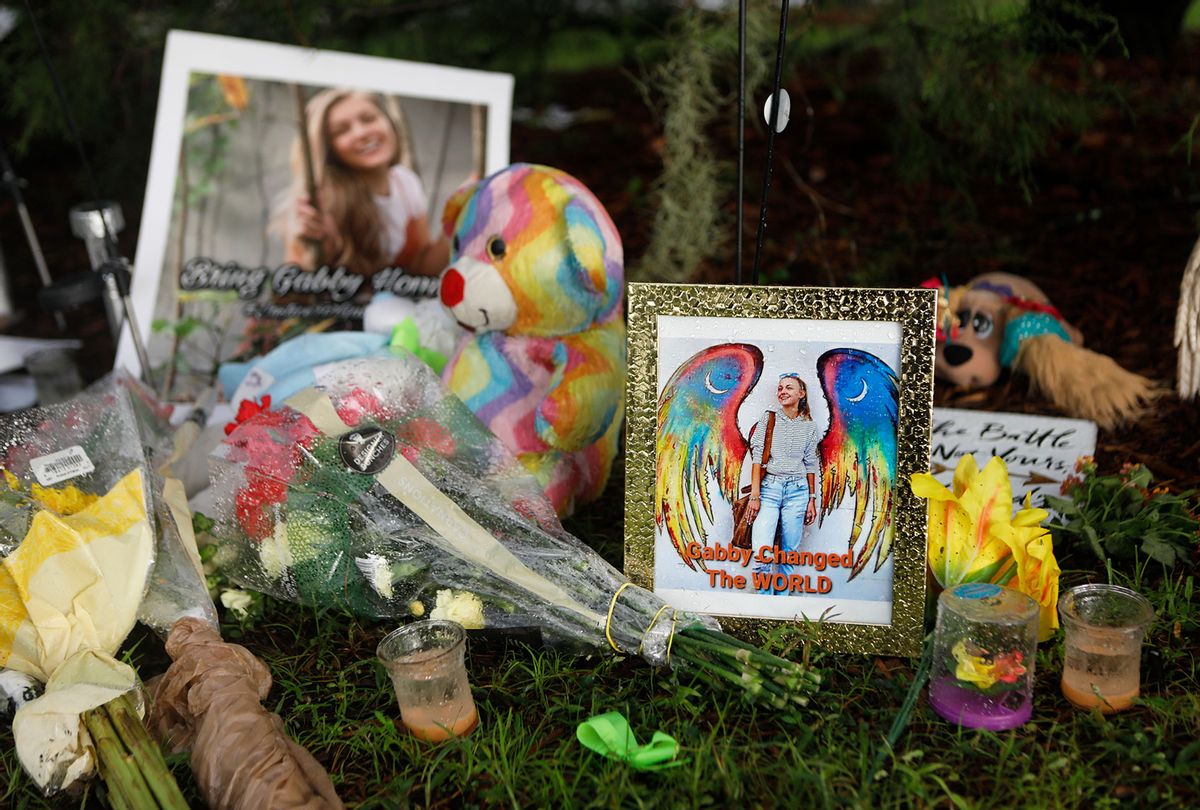 A makeshift memorial dedicated to Gabby Petito is located near the North Port City Hall on September 21, 2021 in North Port, Florida. The body of Petito was found by authorities in Wyoming, where she went missing while on a cross-country trip with her fiance, Brian Laundrie. Law enforcement agencies are for searching for his whereabouts. (Octavio Jones/Getty Images)
--

Joseph Petito and Nichole Schmidt, the parents of murdered "van life" woman Gabby Petito, filed a civil suit on Thursday against the parents of Brian Laundrie, their daughter's fiancé, and killer.

The specifics of the suit detail that the Petito family believe that Brain Laundrie told his parents that he murdered Gabby, and that they had full knowledge of the crime. The Petito's are seeking $30,000 "exclusive of prejudgment interest, costs, and attorney fees," according to ABC. The suit also includes the information that Roberta Laundrie, Brian's mother, blocked the cell phone and Facebook account of Schmidt, Gabby's mother, while an investigation was still underway as to what happened to her daughter, and how Brian was involved.

"As a direct and proximate result of the willfulness and maliciousness of Christopher Laundrie and Roberta Laundrie, Joseph Petito and Nichole Schmidt had been caused to suffer pain and suffering, mental anguish, inconvenience, loss of capacity for enjoyment of life experienced in the past and to be experienced in the future," the lawsuit claims.

The suit makes mention of several instances where the Petito family believe that the Laundrie family chose not to assist or cooperate with the investigation of Gabby's death, and maintains the Petito's conclusion that the Laundries not only knew that Brian had killed their daughter, but helped to conceal his location afterwards.

"Assuming everything the Petitos allege in their lawsuit is true, which we deny, this lawsuit does not change the fact that the Laundries had no obligation to speak to law enforcement or any third-party, including the Petito family," Laundrie family attorney Steven Bertolino said in a quote used by ABC. "This fundamental legal principle renders the Petitos' claims to be baseless under the law."

Gabby Petito and Brian Laundrie set off on a van trip together in the summer of 2021 that ended in tragedy. On August 12 the couple had an altercation that put them face to face with Utah police, an event that was recorded in full and is eerie to watch now, knowing what happened later.

On September 1, Brian returned home in the van that Gabby purchased, without Gabby. It took over two weeks for him to be named a person of interest in her disappearance.

Gabby Petito's remains were found in Grand Teton National Park in Wyoming on September 19. Her cause of death was ruled as strangulation.

The remains of Brian Laundrie were found in the Carlton Reserve in Sarasota County on October 20. His death was ruled a suicide.