The next phase of anti-abortion cruelty: Jail for ending your own pregnancy

Even safe, at-home abortion medication is now under threat 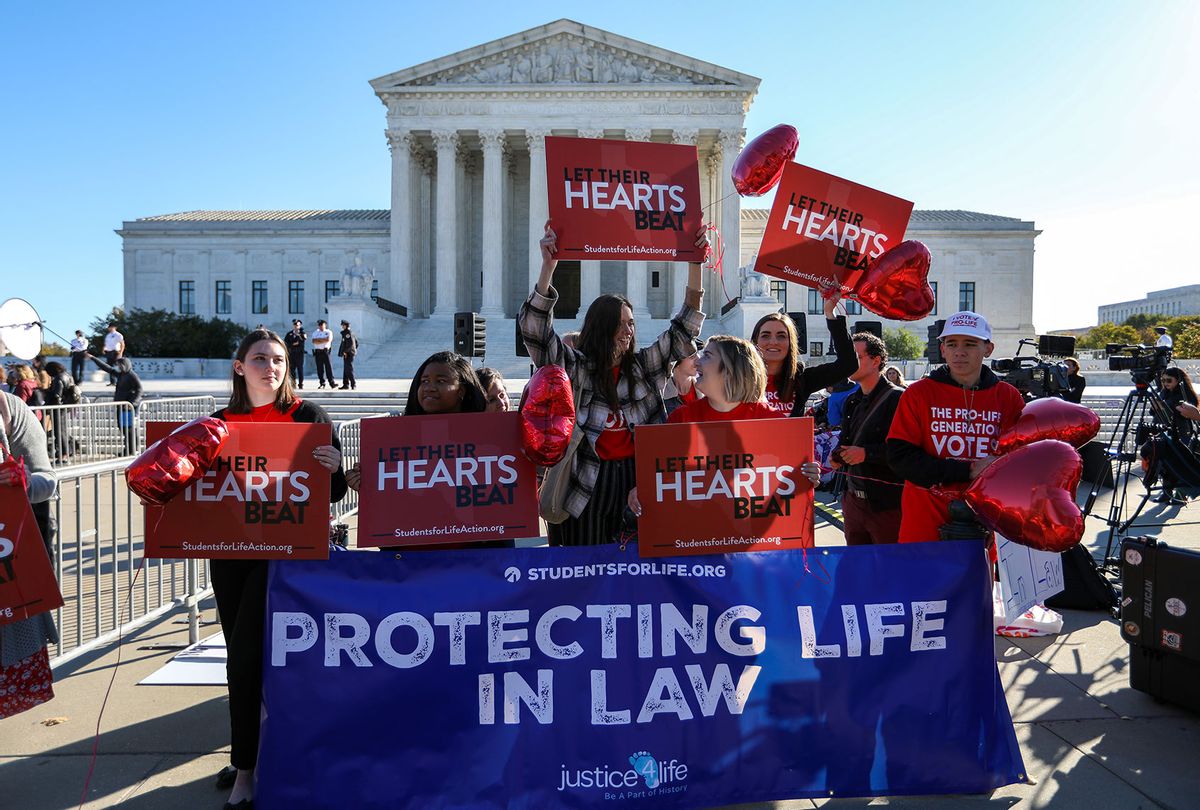 Pro-life demonstrators protest outside of the US Supreme Court in Washington, DC on November 1, 2021. The Supreme Court is set to hear challenges to Texas' restrictive abortion laws. - The conservative-majority US Supreme Court hears challenges on Monday to the most restrictive law passed since abortion was made a constitutional right nearly 50 years ago -- a Texas bill that bans a woman from terminating a pregnancy after six weeks. (Yasin Ozturk/Anadolu Agency via Getty Images)
--

Abortion access is under unprecedented threat around the country. Texas's vigilante abortion ban represents the most recent and most extreme marker of a decades-long campaign to diminish access to reproductive health care for pregnant people in the United States. Its impact has been devastating, leaving millions of people without access to abortion. The Supreme Court is set to release their decision on Mississippi's 15-week abortion ban by the end of June, likely overturning or gutting Roe v. Wade. The demise of Roe would revoke abortion access for millions of pregnant people the US.

I plan to provide abortion care after I finish medical school because I believe this care is essential to people's health and ability to shape their own lives.  But I know that with in-clinic abortions unavailable for many people, some will choose to end their pregnancy without the help of a medical provider.  Some people are worried about a second coming of illegal "back alley" abortions, which had devastating impacts on public health before Roe v Wade legalized abortion in 1973. But ending your own pregnancy can be safe and effective when done with medication abortion pills. People can order abortion pills, the same ones prescribed by a doctor, from the internet. Studies have confirmed that these pills are what they say are, are safe to take, and that people know how to take them safely. This is known as "self-managed abortion," and new guidelines from the World Health Organization recommend it as one of the safe, effective ways to end a pregnancy.

Insurmountable barriers like the ban in Texas are only one of the reasons someone might manage their own abortion. Some people want more privacy, they don't want to pass threatening protesters outside a clinic, a clinic abortion is too expensive, or they live in one of the many areas of the country where the nearest abortion clinic is 100 miles away or more. Some people who manage their abortions might have no other option.

Given the safety of medication abortion, the modern danger of having an abortion outside of a medical setting lies not with the act itself, but with the possibility of criminal charges. Seven states explicitly make this explicitly illegal, and other states have used "fetal protection laws" to investigate and convict pregnant people who attempt to end their own pregnancy. In fact, 21 women have been investigated or imprisoned for ending their own pregnancy in the United States. These same laws have also been used to prosecute women who have miscarried. Due to the racist and classist disparities ever present in the criminal legal system, criminalizing self-managed abortion will undoubtedly have more severe impacts on people of color and poor people. This is a cruel and punitive response in a country that constantly tries to take away someone's access to legal abortion. These laws punish vulnerability, forcing a pregnant person into a situation they can't avoid, and then harming them for not avoiding it.

As a future abortion provider, it especially terrifies me that healthcare providers have reported patients for to law enforcement for their pregnancy outcomes. Not only is it impossible to differentiate abortion from a miscarriage without the patient disclosing that information, but it is a frank violation of our professional ethics to subject a patient to the horrors of incarceration for any reason—especially for exercising their right to health care our government has stolen from them.  Major health organizations have recognized this and officially endorse decriminalizing self-managed abortion, like the American Public Health Association, and the American College of Obstetricians and Gynecologists.

Even if some pregnant people do end their own pregnancy in an unsafe way, surely they should not be punished. Incarceration has a whole host of profoundly negative health impacts, in addition to the psychological harm of being removed from society and put in a cage. No one should ever be criminalized for any pregnancy outcome. Providers must prepare for this hostile anti-abortion landscape by refusing to report patients to law enforcement and avoiding medically unnecessary questions that could put our patients at legal risk. We need to pressure prosecutors in every jurisdiction to pledge that they won't prosecute people for their pregnancy outcomes.

Many of us are terrified for the Supreme Court ruling, and heartbroken about the Texas abortion law. We must work to guarantee that even in the worst outcome, pregnant people's human rights aren't further stolen by the oppressive nature of criminalization.  Access to safe abortion is an established human right, and criminalizing self-managed abortion punishes those exercising the bodily autonomy we are all entitled to.

Read more on the war against abortion:

Chris Ahlbach is a fourth-year medical student at the University of California, San Francisco.