Sam Heughan could “absolutely see 'Outlander' without me”

Plus: Why "Outlander" hired an intimacy coordinator this season 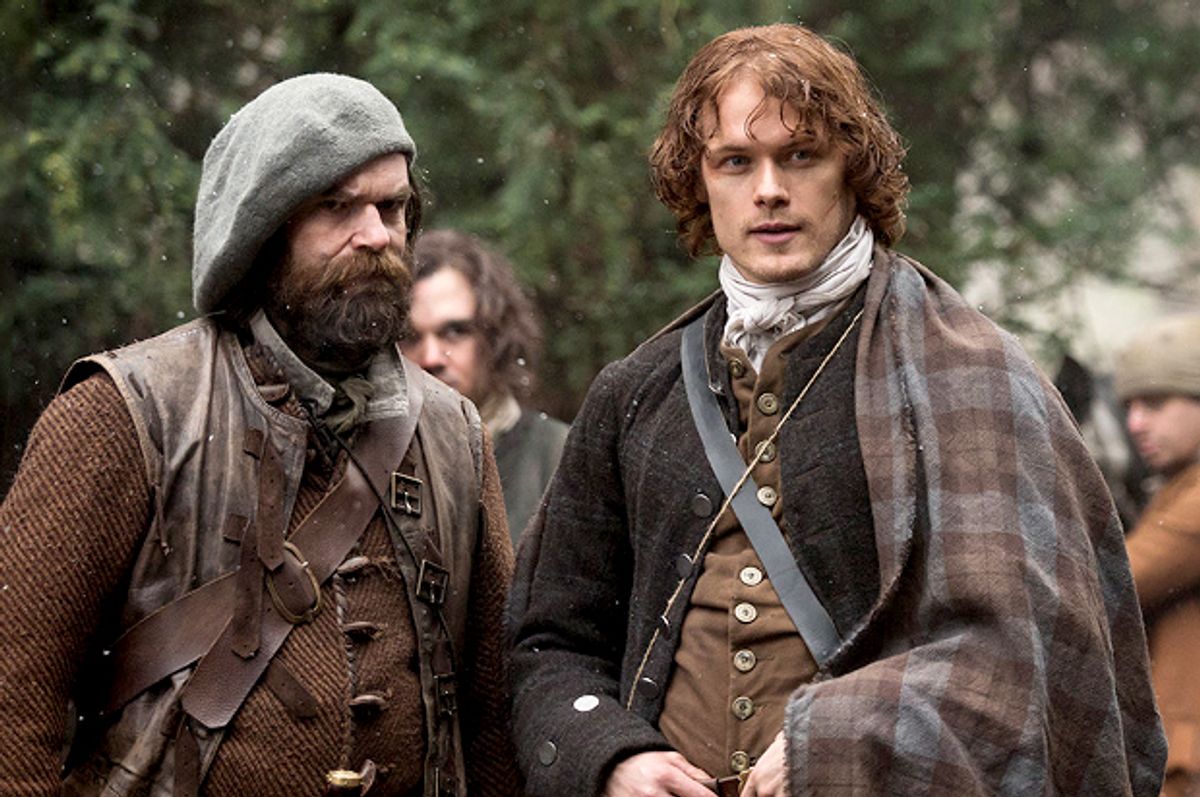 The sixth season of "Outlander" is here! Ahead of the long-awaited season premiere, and cast has been out there talking up the new episodes, including frontman Sam Heughan, who plays Jamie Fraser.

That said, not everything they have to say about the season is nice. For instance, here's what Heughan said at the red carpet premiere in London when asked to described season 6 in one word: "I'm going to say decay, which is not a great word. It's a dark season."

Some of that "decay" has to do with the the arrival of the Christie family on Fraser's Ridge, the community Jamie and his wife Claire (Caitriona Balfe) have set up in the American colonies. "To tease the season, Jamie's past comes back to haunt him, an old adversary in the shape of a man called Tom Christie," Heughan told Men's Health. "He was also a fellow intimate in prison with Jamie years ago, and now he comes to live on Fraser's Ridge with his family, and they really signal the beginning of the decay of the Fraser's power.

That Frasers have become affluent. The town has grown. Jamie and his wife Claire almost seem to be like chiefs. They're very good landowners, but with the arrival of this new family, we really start to see people's support and loyalty to Frasers start to wane, and it signals the beginning of change in Fraser's Ridge.

And that's on top of other difficulties the couple are having, like dealing with the fallout from the end of season 5, where Claire survived a horrific sexual assault. Jamie will give her space to deal with her trauma, but is fully there to support her. "[H]e's keeping an eye on her. He knows that she'll come to him should she need it," Heughan told Radio Times. "[This is] unprecedented [territory] for both of them. It really does come to a head, because she keeps this secret [her self-medicating] from him. Normally, they deal with everything together."

Why "Outlander" hired an intimacy coordinator for season 6

At the same time, life will go on, and Claire and Jamie will forge ahead together, despite these new difficulties. "You never get to see the domestic daily life of a couple who actually make things work," Heughan said. "There's plenty of that in season 6, despite fewer episodes. "We do somehow spend more time with them. There are some lovely moments where you see Jamie and Claire just being in each other's company."

And on a show like "Outlander," that will mean some sex scenes, which the series has become famous for. But the way these scenes are filmed has changed since the show began, and Heughan took advantage of his role as producer to bring on an intimacy coordinator, which is kind of like a choreographer for sex scenes, someone who makes sure all the participants feel safe and comfortable.

"I brought on board the intimacy advisor Vanessa Coffey because with intimate scenes, it's important that everyone is protected, but also we find a way to explore these scenes and actually maybe get something more out of them," Heughan said on the Happy Sad Confused podcast. "I think this season we've done an even better job with those types of scenes because she really helped us understand what we are doing and how we build up this relationship and take it somewhere else, so she's been terrific."

I got into this in a very different time and the Starz network was different, but also the industry was different, and so we really didn't know what we were doing. We were thrown in the deep end and had to learn through the experience, so I think it's been really great to bring Vanessa on board to help younger actors with less experience.

Sam Heughan on the future of "Outlander"

Finally, Heughan talked a bit about what comes after season 6, not just the super-sized season (which will have 16 episodes to make up for season 6 only having eight), but the potential end of the series.

"I know how it ends, [author Diana Gabaldon] has told me, but we still have a long way to go before we get to that," Heughan told The Times. "Diana Gabaldon has so many other books, like the Lord John series, and she's writing a prequel to 'Outlander' about Jamie's parents. So I can absolutely see 'Outlander' without me."

Just to confirm, he seems to be saying that the "Outlander" franchise could continue after he's gone (which is indeed Starz's plan), not that the original show would do so, just in case anyone is panicking. "Diana Gabaldon has this whole world in her head, and how she ties up all those loose ends I have no idea," Heughan continued. "This season we do start to pull on more of what's going on in, dare I say, other parts of time. We're really starting to see these other stories, a lot of the other characters have their own storylines. This season, and definitely next season, we are going to see a lot more of that coming into play."

As for when the original series might end…well, the show has roughly adapted one book per season, and Gabaldon is planning 10 books before ending things. So maybe 10 seasons? "That would do it, wouldn't it?" Heughan said.