Rick Scott believes he can get elected president on a program of making inequality great again. He may be right 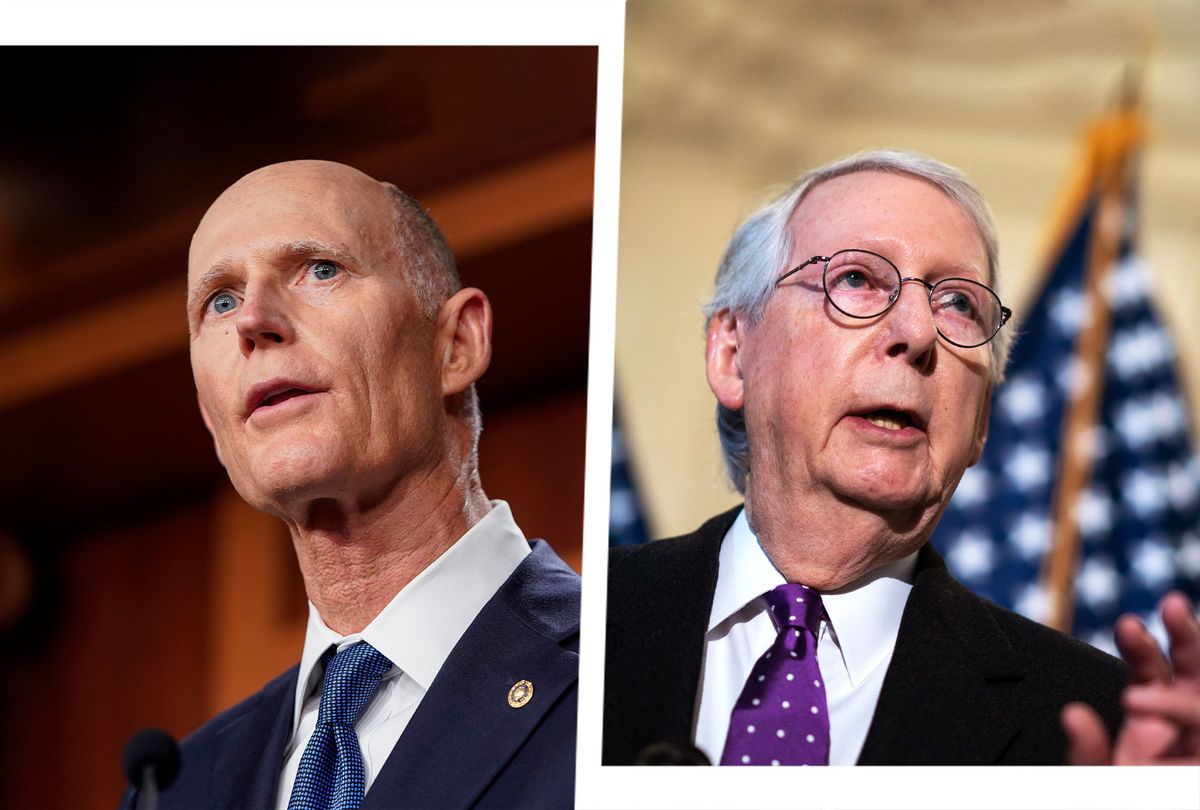 They're at it again: Republicans want to raise taxes on poor and working-class Americans, end Social Security and Medicare, jack up pollution and corporate profits, all while continuing to pamper their billionaire donor base.

This time it's the guy in charge of getting Republican senators elected and re-elected, Florida Sen. Rick Scott.

You may remember him as the guy who ran the company convicted of the largest Medicare fraud in the history of America, who then took his money and ran for governor of Florida, where he prevented the state from expanding Medicaid for low-income Floridians for all the years he ran the state.

Now he's the second-richest guy in the senate and, IMHO, the leading candidate for the GOP nomination for president in 2024. And, true to form, he's echoing the sentiments of the richest guy in the Senate, Mitt Romney, the last guy before Trump to have that nomination.

Low income working people in America generally pay a higher percentage of their income as taxes than do most of our billionaires and multi-multi-millionaires. They pay Social Security taxes, Medicare taxes, property taxes, sales taxes and taxes in the form of fees for everything from a driver's license to road tolls to annual car inspections.

As Romney pointed out, though, about 47 percent of Americans in 2012 made so little money that, after applying the standard deduction, they paid no income tax.

This doesn't just reveal how few people pay taxes, though. To the contrary, it reveals how many Americans are living in or on the edge of poverty.

The simple reality is, if you want more people to pay income taxes, all you have to do is raise working people's pay. We saw this in a big way between 1950 and 1980, when Keynesian economics reigned and labor unions helped wages — and the taxes they paid — steadily rise for working people.

But Republicans don't like the idea of what they call "wage inflation." They'd rather just squeeze working people harder, while continuing their subsidies of the lifestyles of the morbidly rich "donor class."

More than half of Americans make so little money from their employment that they can't deal with an unexpected $1,000 expense like a car accident or medical bill.  And it's these very people who Rick Scott and the GOP believe need to be further taxed so they'll have what Scott calls "skin in the game."

In the early years of the Reagan administration, before his neoliberal "trickle down" and "supply side" policies started to really bite Americans, only 18 percent of Americans were so poor that their income didn't qualify to be taxed.

As "Right to Work for Less" laws spread across America and Republicans on the Supreme Court made it harder for unions to function, more and more working people fell below the tax threshold.

Today it takes two working adults to maintain the same lifestyle that one worker could provide in 1980, so an estimated 61 percent of working Americans this year will make so little pay that their income isn't subject to taxation.

Rick Scott and the GOP's solution to this situation isn't to raise the income of working-class people. Quite the contrary: They're suggesting that low-income people should be hit with their very own income tax — in addition to the dozens of other taxes they're already paying — all so multimillionaires and billionaires like Scott and his friends can hope to see their own taxes go down a tiny bit.

Doing his best imitation of Newt Gingrich, Scott has rolled out his 11-point-plan to soak the American middle class, lock down elections, destroy consumer protections, increase pollution and climate change and squeeze a few more dollars out of every family, no matter how tight their budgets may already be.

Scott calls that "rescuing America." And it may be true, if you're morbidly rich and made your money spewing pollution or hustling opioids.

His plan not only calls for a 50 percent cut in the IRS workforce, presumably to end all audits of rich people like Scott, but also demands all federal legislation to "sunset" within five years. That would almost certainly end Social Security and Medicare, programs that have been in the crosshairs of Republicans since Reagan's day.

Realizing how "raising taxes on 60% of American voters" will play in campaign ads, Mitch McConnell has backed away from Scott's bizarre proposal. But Fox News is all over it, inviting Scott on repeatedly to hawk his plan and prepare the ground for his candidacy. After all, billionaires like Rupert Murdoch and his family need their tax breaks!

As Sean Hannity told Scott during a recent appearance, "I want to applaud you. I'd like to see the House and the Senate come together on these issues, make these promises to the American people, get elected and then fulfill those promises."

No doubt multimillionaire Hannity was speaking his own truth. But for the majority of Americans who are so poor they barely have to pay income taxes, Scott's plan is just the latest in a 40-year barrage of assaults and insults coming from the GOP.

Read more on the Republican agenda: