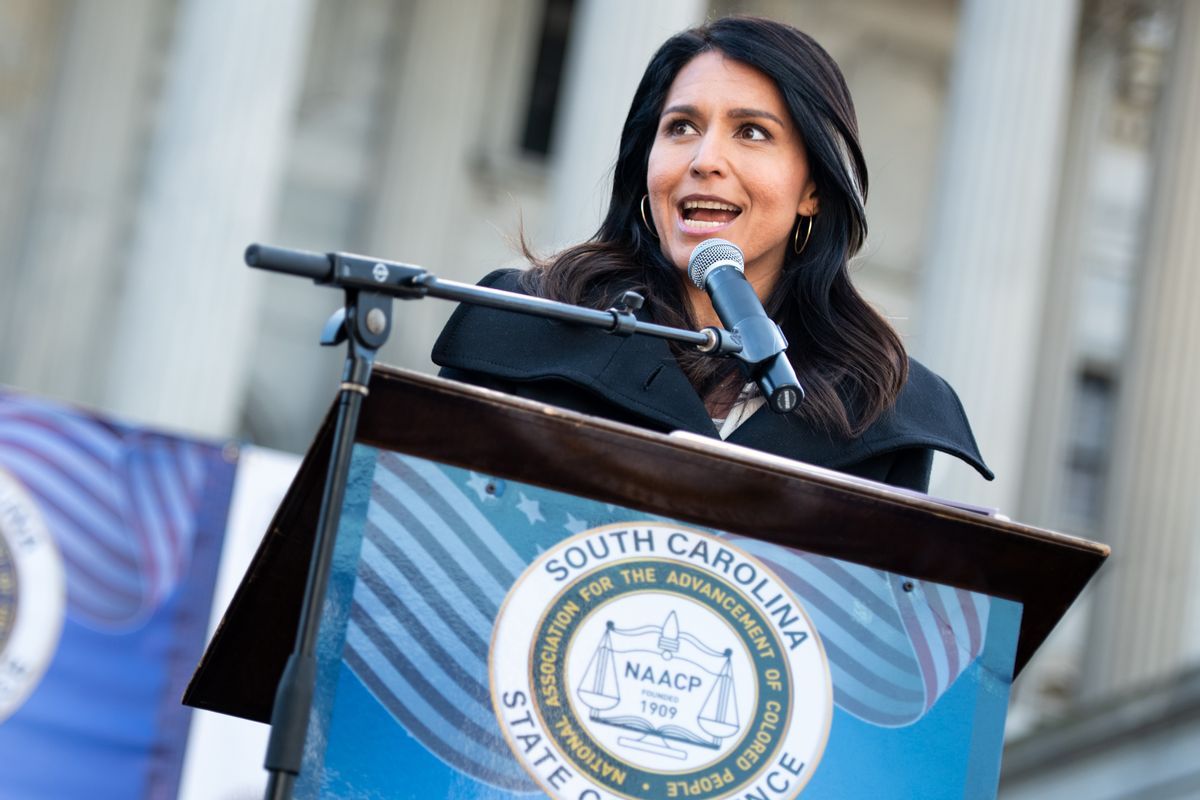 Republicans are attacking former Rep. Tulsi Gabbard for spreading "Russian propaganda" after she posted a video claiming that the U.S. is funding and operating bioweapons labs in Ukraine.

On Sunday, the Hawaii Democrat published a two-minute video laying out the completely unproven conspiracy theory that the U.S. is funding between 25 and 30 biolabs in Ukraine to develop "dangerous pathogens".

"Like COVID, these pathogens know no borders," Gabbard said. "If they are inadvertently or purposely breached or compromised, they will quickly spread all throughout Europe, the United States and the rest of the world, causing untold suffering and death."

Those comments did not sit well with many Republicans, some of whom accused the former lawmaker of playing into the hands of Kremlin-backed disinformation.

"Traitorous. Russia also said the Luger center in Georgia was making zombies," he said on Sunday. "Tulsi should go to Russia."

"Her treasonous lies may well cost lives," he wrote on Sunday over Twitter.

On Monday, Alyssa Farah, the former director of strategic communications under Donald Trump, said that Romney was "absolutely right."

RELATED: So is Tulsi Gabbard really a "Russian asset"? How would we know for sure?

"What this is, is the Russians are spreading propaganda to try to create a pretext for potentially using chemical weapons against the Ukranians," Farah said during a segment of ABC's "The View."

"What Tulsi Gabbard is spreading is actually helping Putin get away with criminal acts against innocent Ukrainian civilians," she added.

The U.S. has repeatedly dismissed claims that it is holding or developing bioweapons in Ukraine. However, there are a number of biological labs in Ukraine, which the U.S. funds, to prevent the deployment of bioweapons, according to The New York Times. The funding of those labs stems from the Pentagon's Defense Threat Reduction Agency (DTRA), founded in 1998. In 2005, the U.S. and Ukraine signed an explicit agreement ensuring that the labs would not be used to develop bioweapons.

Back in 2018, Filippa Lentzos, a Norwegian scientist researching threats posed by biological agents, called the Kremlin's claims "unfounded" after visiting a number of Ukrainian biolabs herself.

"We were given access to all areas of the site, examined relevant documentation, and interviewed staff, and concluded that the Center demonstrates significant transparency," Lentzos said. "Our group observed nothing out of the ordinary, or that we wouldn't expect to see in a legitimate facility of this sort."

Gabbard has since scrambled to explain her tweet and called on Romney to resign.

Suggesting that there might have been some "miscommunication and misunderstanding" about the terms bio labs and bio weapons labs, Gabbard tweeted: "'Biolabs' are facilities which contain and experiment with dangerous pathogens, ostensibly for the purpose of serving the public good (i.e. vaccines, etc.). 'Biological weapons labs' are facilities which exist for the purpose of turning pathogens into weapons so they can be used against an enemy (i.e. 'bioweapons')," Gabbard tweeted.

On Wednesday, Gabbard was listed alongside GOP Rep. Marjorie Taylor Greene, R-GA and Fox News' Carlson as the "most influential" in spreading anti-Ukraine disinformation and misinformation. Disinformation and digital authoritarianism researcher Marc Owen Jones, an assistant professor of Middle East studies and digital humanities at Hamad bin Khalifa University, featured Gabbard's tweets about Ukraine and "biolabs" as the latest Russia conspiracy theory propagated by right-wing media in the U.S.