So is Tulsi Gabbard really a "Russian asset"? How would we know for sure? 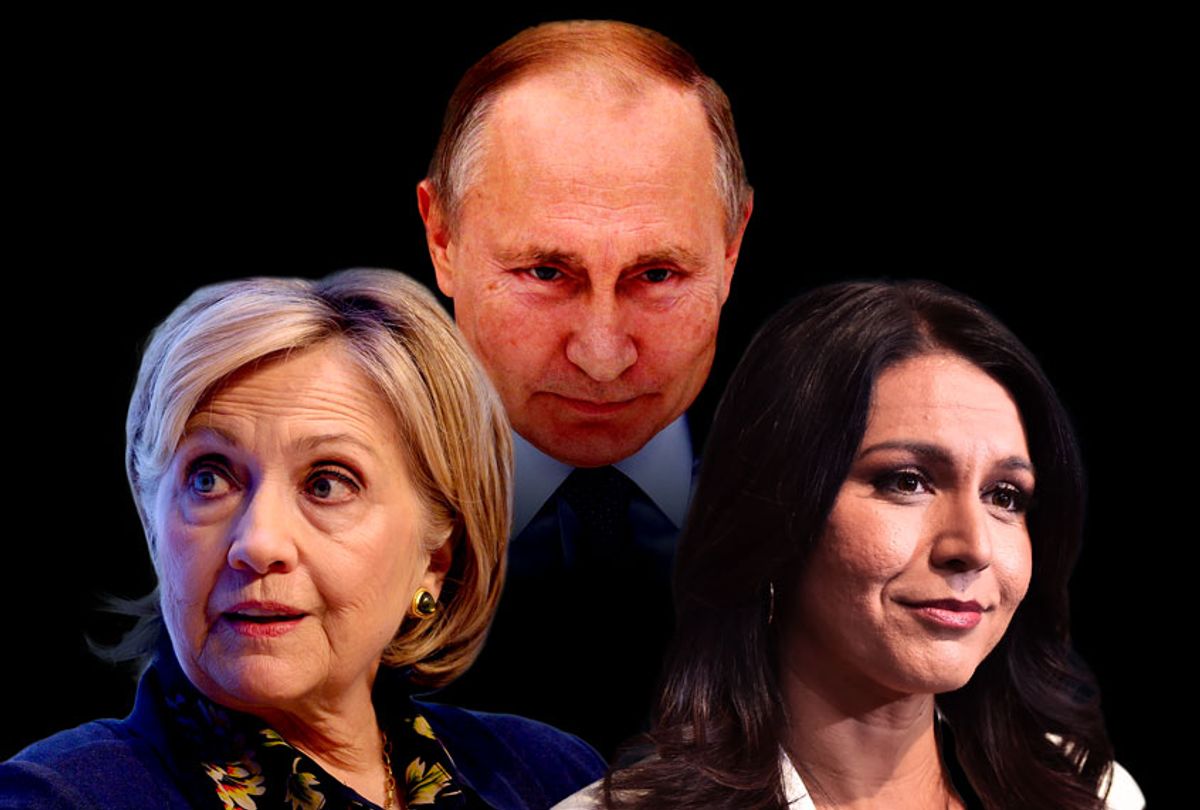 Is it valid to accuse Rep. Tulsi Gabbard, a Democrat from Hawaii and a current presidential candidate, of being a “Russian asset”?

It’s a strange question, and one that normally wouldn’t need to be answered. Gabbard has never polled above the low single digits and has no realistic chance of being the 2020 Democratic nominee. Surrounded by controversy and facing a primary challenge from a more conventional Democrat, she has already announced she won't run for re-election to Congress either.

But in recent weeks, Gabbard has been making news in peculiar ways. Although in most respects she is a left-wing Democrat, Gabbard has lately become something of an icon among Republicans and other conservative-leaning types. She has appeared on Fox News to criticize the impeachment inquiry into President Trump, has claimed that the Democratic presidential primaries are “rigged” and has been praised by far-right pundits, from online troll Mike Cernovich and former KKK Grand Wizard David Duke to former Trump strategist Steve Bannon.

At least some of that praise derived from Gabbard’s war of words with Hillary Clinton, who had seemingly accused Gabbard — an Iraq war veteran and an officer in the Army Reserve — of being a tool for Russian subversion. In this context, it’s important to look at what Clinton actually said during a podcast interview with David Plouffe, onetime campaign manager for Barack Obama:

They're also going to do third party. I'm not making any predictions, but I think they've got their eye on somebody who's currently in the Democratic primary and are grooming her to be the third-party candidate. She's the favorite of the Russians, they have a bunch of sites and bots and other ways of supporting her so far, and that's assuming Jill Stein will give it up, which she might not, because she's also a Russian asset. Yeah, she's a Russian asset, I mean totally. They know they can't win without a third-party candidate. So I don’t know who it’s going to be, but I will guarantee you they will have a vigorous third-party challenge in the key states that they most needed.

Clinton’s PR team later clarified that word-salad, saying that she was not accusing the Russians of “grooming” Gabbard as a third-party candidate. Even so, Clinton still referred to Gabbard as “the favorite of the Russians” and appeared to describe her — depending on how you parse the sentence — as a “Russian asset.” Clinton has not retracted either of those claims, and Gabbard responded by labeling Clinton as “queen of the warmongers” and an “embodiment of corruption” and, later, demanding an apology. (Gabbard has also said several times she will not run as a third-party candidate.)

Donald Trump got into the fray by defending Gabbard and describing Clinton as “sick,” while Sen. Bernie Sanders — whom Gabbard supported against Clinton in the 2016 primaries — tweeted that “people can disagree on issues, but it is outrageous for anyone to suggest that Tulsi is a foreign asset.” Several other current and former Democratic presidential candidates also defended Gabbard, including former Rep. Beto O’Rourke, who served with her in Congress.

This brings us back to the original question: What does it mean to accuse someone of being a “Russian asset” — and does that apply to Gabbard? I reached out first to Bill Browder, an American-born British businessman who spent many years in Russia and became a leading foe of Vladimir Putin. He later pushed Congress to pass the Magnitsky Act, which allows the U.S. government to freeze assets and ban visas for human-rights violators around the world.

"All I have is an observation on a number of observable facts about Tulsi Gabbard in connection with Russia or Russian interests,” Browder said. “The first fact is that Tulsi Gabbard had hired a man named Chris Cooper from a firm called Potomac ... to help her run interference on people who were doing negative reporting on her. Chris Cooper has an ugly history of having been involved in the anti-Magnitsky campaign,” including work in 2016 intended, Browder says, to discredit him personally along with the Magnitsky Act.

Adding that Gabbard was one of the few members of the House to vote against the Global Magnitsky Act in December 2016, Browder cited as his “next piece of circumstantial evidence” the fact that “Tulsi Gabbard is celebrated on Russian state television." He also pointed to the “very unpleasant fact” that Gabbard “is a supporter of Bashar al-Assad, the dictator in Syria, and the person responsible for the genocide of hundreds of thousands of Syrian civilians. And that is a position which is exactly consistent with the position of the Russian government." (Gabbard has said she does not support the Assad regime, although she has met the Syrian president and has at times expressed skepticism about charges that Assad has used chemical weapons in Syria’s civil war.)

Gabbard "may be entirely innocent” of any actual collaboration with Putin, Browder said, “but she may be an asset as far as the Russians are concerned because they may see her candidacy as an opportunity to further spread chaos in the U.S. political process." He noted that Putin is likely “extremely happy” with the chaotic consequences of his meddling in the 2016 presidential election, noting that Trump’s ascent to power has earned Putin “some huge geopolitical wins,” such as Trump’s decision to withdraw U.S. troops from Syria.

I also reached out to Michael McFaul, who was Obama’s ambassador to Russia from 2012 to 2014 and is also despised by Putin, so much so that during the infamous Helsinki summit last year, Putin tried to persuade Trump to hand both Browder and McFaul over to him on charges that could generously be called dubious.

Like the seasoned diplomat he is, McFaul was far more cautious in the language he used about Gabbard. “I do not believe generally that somebody should be suspected of being an agent for a foreign country because of a foreign policy position that they have taken,” he said, adding he had not closely followed Gabbard’s positions and associations. “I think one needs to be very careful about insinuations of working for a foreign government. One should have some firm documentation before saying such matters.”

Gabbard’s campaign did not respond to multiple requests for comment regarding this article. When an NBC reporter asked Gabbard last month about her alleged ties to Russia, she characterized the accusations as a “smear campaign.”

While Browder and McFaul seemed to take very different approaches to the Gabbard controversy, both made valid points. It’s generally not appropriate to make such a serious accusation based only on circumstantial evidence. If Hillary Clinton knows of any such evidence, she did not offer it.

Donald Trump, by contrast, was revealed by special counsel Robert Mueller to have actively sought the Russian government’s assistance during the 2016 election. There have been no investigations that have yielded any comparable evidence about Tulsi Gabbard.

Furthermore, it’s unwise and deeply un-American to suggest that people have been compromised by a foreign power simply because they hold controversial or unpopular views on foreign policy. Although the accusation of “McCarthyism” gets thrown around too freely, it is legitimate here. Sen. Joseph McCarthy’s infamous witch hunts against alleged communists often targeted men and women who held unorthodox foreign-policy positions or who spoke out against the U.S. government’s Cold War policies.

It’s also fair to note that America has a mixed record on human rights, at best, and exposing such violations can sometimes be helpful to our global rivals. When WikiLeaks founder Julian Assange leaked information about U.S. human rights abuses in Iraq and Afghanistan, that was almost certainly welcomed by the Kremlin. There may be other reasons to suspect that Assange was in league with the Russian government, but releasing evidence of war crimes belongs to a totally different category.

All that said, there’s little doubt that Putin is trying to subvert the governments of other countries to create an “illiberal international.” We can be mindful of that without becoming paranoid. In a conversation I had with McFaul last January, he compared Putin to Vladimir Lenin, revolutionary founder of the Soviet Union.

“Lenin and his comrades created the Communist International,” he explained. “I do think Putin is leading something akin to an Illiberal International, not only in our country, but trying to find like-minded individuals, and movements and parties first and foremost, in Europe, in the United States, and he's investing in those relationships.”

He added that Putin’s ultimate goal is “the end of the liberal international order. ... The breakup of states as you have in the U.K., the breakup of alliances and NATO, the breakup of the European Union — those are all things that Putin thinks are in his national interest.”

Despite Republican claims to the contrary, it is clear that the Trump campaign was eager to work with the Russian government in 2016. Putin has meddled in other nations’ political processes in order to bring about results he sees as favorable to his interests. Just as there really were Communist agents in the West during the Cold War, there are politicians today who serve Putin’s interests in the post-Cold War world.

How do we identify those people and those forces without smearing innocent people simply because of the opinions they hold? If we don’t raise red flags where appropriate, we risk being played for suckers, as happened in the 2016 election. If we’re overzealous in exposing “Russian assets,” for example, purely by identifying people who hold unorthodox or unpopular positions, we risk creating a latter-day McCarthyism. That challenge will persist long after Tulsi Gabbard has faded from the public consciousness, and long after the political tribulations of this decade have entered the history books.