Bill Browder is Putin's public enemy No 1 – but he isn't scared : He's a "very stupid strategist" 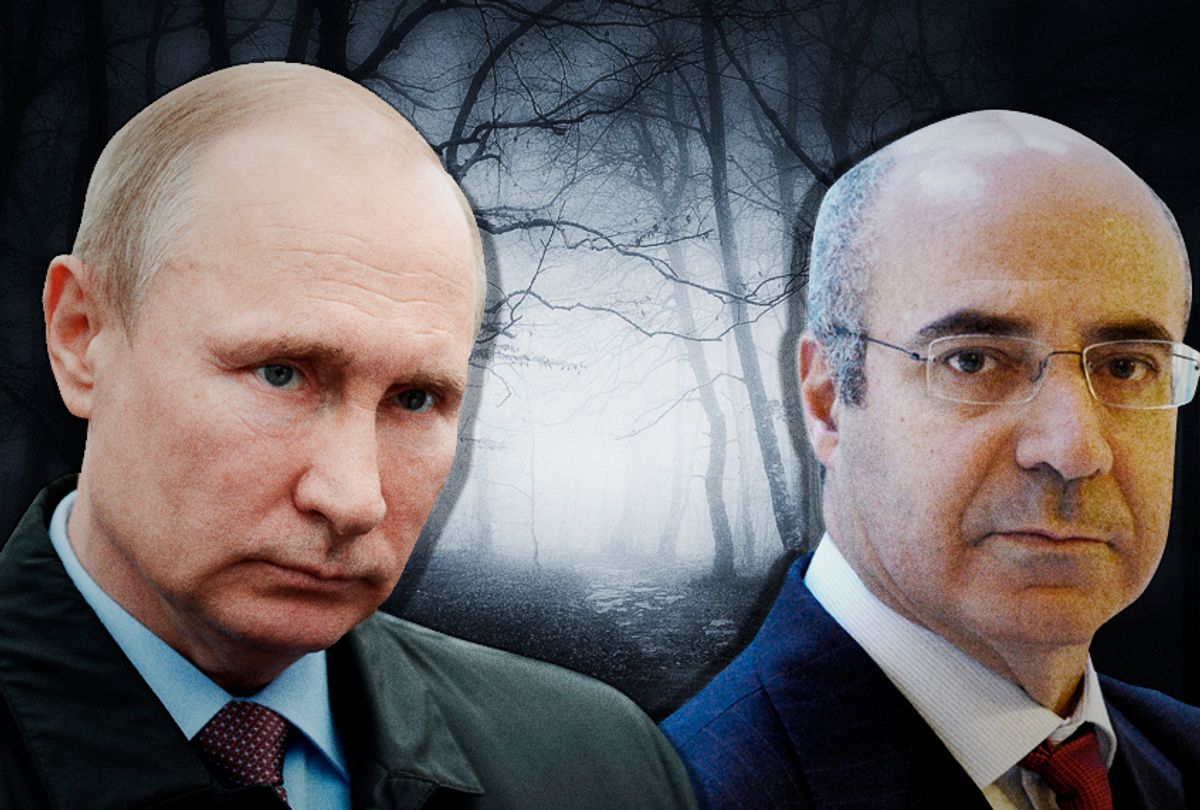 There are few people who could rightly be considered freedom fighters in the ongoing battle between Russian President Vladimir Putin and the forces of human rights, but British businessman Bill Browder has as legitimate a claim to that title as anyone. Shockingly, Putin seemed to have temporarily convinced President Donald Trump to hand over Browder for interrogation at the Helsinki summit in July.

Why does Putin want Browder dead? Browder's own words at the time to Time Magazine explain the situation best:

I’m lodged so firmly under Putin’s skin because I’m the person responsible for getting the Magnitsky Act passed in the United States in 2012. This is a law that allows the U.S. government to freeze assets and ban visas of human-rights violators around the world. Some of these human-rights violators had killed Sergei Magnitsky, my Russian lawyer who was murdered in a Moscow jail for uncovering a massive $230 million government-corruption scheme that we’ve since traced to known Putin cronies. In essence, Putin received some of the proceeds of this crime, and he is terrified that the Magnitsky Act could be applied to his offshore fortune, which is probably one of the largest amassed in modern times.

Now that Browder is back in the news with his statement this week on "The View" that Trump's support for Putin "makes no sense unless there's some other information we don’t have available to us," it is worth looking at Salon's own interview with the anti-corruption activist.

You have also speculated that Putin arrested [American] Paul Whelan as a response to the conviction of Maria Butina.

Would you be willing to elaborate a little bit on that?

Well there’s some new information, which is her lawyer is also his lawyer now also speculating on flopping him. If not for Butina, then for Viktor Bout or Konstantin Yaroshenko.

You think this was definitely a gambit by Putin to retaliate because of Butina’s conviction?

Well, so what I think is that Butina’s conviction was... so the Russians never leave a slight unpunished, and they felt very slighted by Butina’s conviction, because Butina — or her guilty plea I should say — because Butina has drawn the closest direct line between Vladimir Putin himself and financial support for having Donald Trump elected. Vladimir Putin employed Torshin. Torshin employed Butina. Torshin provided money for Butina to provide to the NRA, and the NRA provided money to the Trump campaign.

I want to take a step back from – I’m sorry, I didn’t mean to interrupt.

I have a great anecdote that I want to share with you from our own case in which: If you remember, the Magnitsky case was all about the theft of $230 million of taxes that we paid to the Russian government. In order to try to deflect blame in that case, members of the criminal group in Russia traveled to London, took a bunch of documents that were used in the crime, took those documents to the DHL office in Lambeth, South London. DHL took those documents to the office of my lawyer, Ed Ward, in Moscow, and then 45 minutes after the DHL package arrives, the police raided his office to, “find the documents,” and then blamed him for being involved in the $230 million crime.

So this is what just the Putin regime does: They fabricate crimes in order to be able to justify authoritarian actions. I was speaking with Michael McFaul and he says that they believe that Putin claims that he and Hilary Clinton tried to sabotage his reelection campaign by stirring up protests?

Vladimir Putin has to create foreign enemies, and he also has to justify… he has to claim… he can’t acknowledge that there’s a legitimate protest against his authoritarian rule, so he’s got to blame it on Hilary Clinton.

I guess I want to take a step back for a moment and ask you, because you’re in a better position to know this than anyone else, what is Putin’s broader agenda? Is he another Adolf Hitler who dreams of world conquest and imposing a far-right agenda everywhere? Is he more of a petty kleptocrat? What does Putin want?

I think the best comparable would be Pablo Escobar. Putin is a criminal. He’s committed enormous financial crimes of unimaginable magnitude over the last 19 years against his own country. Because he’s committed those crimes, and it was just reported today that 1 in 4 Russians don’t even have an indoor toilet, they’re so poor. Those crimes have impoverished the Russian people. At this point, his only objective is to stay in power, which allows him to keep his money and stay alive, and so all of his actions — whether they’re repressive actions, repression in Russia or foreign conflicts outside of Russia — it’s all designed to either stay in power, to create a nationalistic diversion and to also create chaos in the West so we can’t focus on the terrible things he’s doing.

In other words you’re saying he doesn’t have the ambition of a Hitler or a Joseph Stalin, where there is this vision he has for the world. He is in a sense a petty kleptocrat, as I put it before.

Now in terms of his relationship with the United States, I was wondering if you could contrast the relationship that Donald Trump seems to have with Putin, with the relationships of Hilary Clinton and Barack Obama, and if you even want to go way back, George W. Bush.

Well, I’ve studied the relationships all very carefully, and what I’ve seen is that as critical as everybody is of Trump and his warmth towards Putin, everybody else did the same thing. George Bush looked into Putin’s eyes and saw his soul in the first meeting he had in Slovenia. And then in the next meeting, he realized his soul was very dark. Obama and Hilary Clinton tried to reset relations with Russia, and that meant for a number of years a very frustrating appeasement strategy. There was even a hot mic situation where Obama said to Medvedev at the time, don’t worry we can do this after the elections. And then we have Trump who, inexplicably after all the evidence then of the monstrousness of Putin, continues to say nice things about him. But every president seems to have made a mistake with Putin, not just Trump.

Do you think Trump is in anyway worse than his predecessors?

Well from my perspective, he’s worse than his predecessors because, for a brief period of time, he offered to hand me over to Putin!

Well, I would imagine you do have skin in the game because of that.

Also, he doesn’t seem to have the level of… he doesn’t read briefing reports or have any specifications at all about what this guy’s up to.

What is your opinion on the future of America as a result of what Putin did during the 2016 election? Has he succeeded in striking a permanent blow against democracy in this country, for lack of a better way of putting it?

Well, I believe that the institutions of United States are now being tested. It’s kind of like a… it’s a virus that has now has tried to infect the United States. I believe the institutions are the immune systems in the United States. I think that United States will survive this attack, and as far as Putin is concerned, I think that he has done himself very grave long-term harm to his own interests. Because the next regime in the United States is going to come down so hard on Putin, he’s not going to know what hit him. He’s playing such a short-term game that he doesn’t understand that whether it’s Democrats or Republicans, any normal reasonable person will want to be absolutely, devastatingly aggressive towards Russia after Trump is finished.

So in a sense this pop-culture image of Putin as a grand strategist you think is flawed?

I think he’s a highly effective short-term tactician and a very, very stupid strategist, because his long-term interests are not served by alienating the entire Western world to sort of rally against him. He can do all these frauds and scams and tricks on a short-term basis, but pretty much everybody understands what he’s up to.