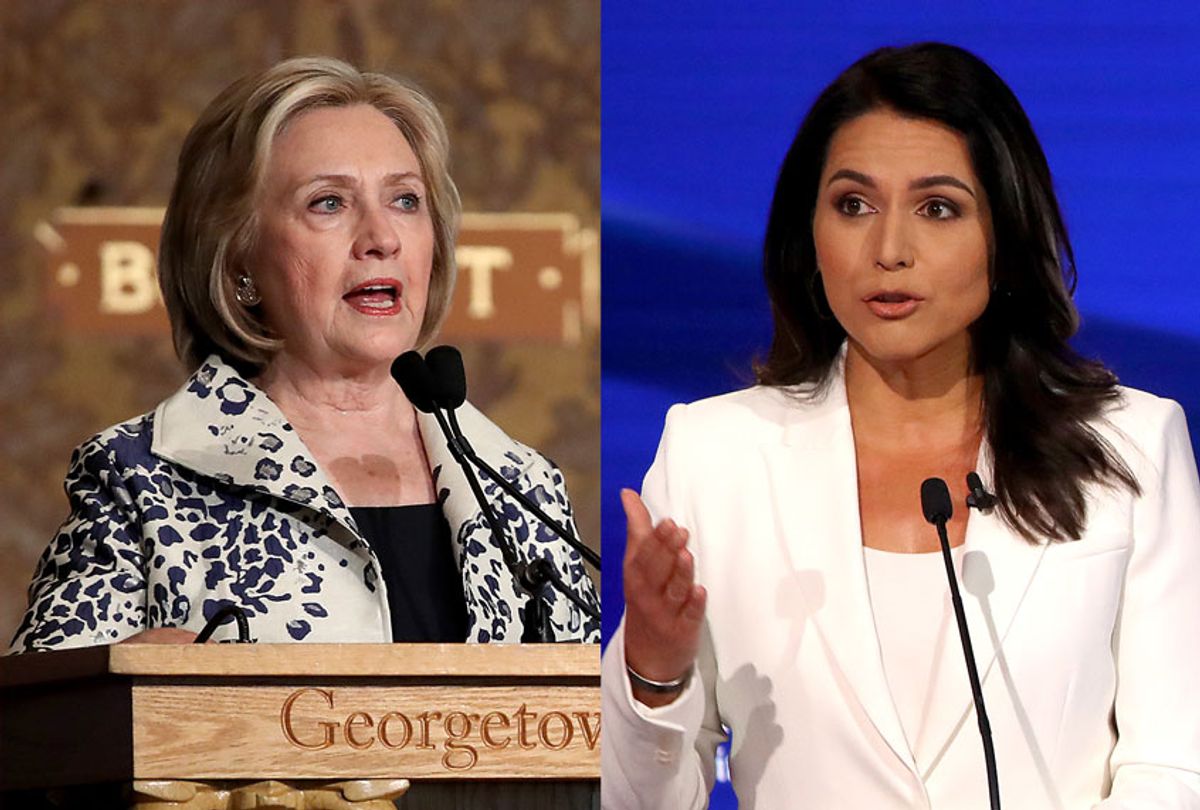 Former Secretary of State Hillary Clinton suggested that she thinks Rep. Tulsi Gabbard, D-Hawaii, is being “groomed” by Russia to run as a third-party candidate in 2020.

Clinton made the allegations during an interview with David Plouffe, Barack Obama’s former campaign manager. During the interview, Clinton alleged that Russia used 2016 Green Party nominee Jill Stein as an “asset” and suggested that Gabbard would play a similar role in the upcoming election without mentioning her name.

“They’re also going to do third-party again,” Clinton said. “I’m not making any predictions, but I think they’ve got their eye on someone who’s currently in the Democratic primary and are grooming her to be the third-party candidate. She’s the favorite of the Russians. They have a bunch of sites and bots and other ways of supporting her so far.”

Clinton went on to label Stein a “Russian asset.”

“And that’s assuming Jill Stein will give it up, which she might not because she’s also a Russian asset,” Clinton said. “Yeah, she’s a Russian asset — I mean, totally. They know they can’t win without a third-party candidate. So I don’t know who it’s going to be, but I will guarantee you they will have a vigorous third-party challenge in the key states that they most needed.”

On Friday, Gabbard struck back on Twitter, calling Clinton "the queen of warmongers" and "embodiment of corruption" and challenging her to enter the Democratic race:

Though Democrats have often pointed to Stein getting 1 percent of the vote in key states like Michigan, Pennsylvania and Wisconsin as a reason Clinton lost those longtime Democratic strongholds, exit polls have shown that most of Stein's voters would not have supported either Clinton or Trump if Stein had not run.

Gabbard, who has accused the Democratic Party of “rigging” the primaries, has defended Syrian President Bashar al-Assad for apparent war crimes, has frequently appeared on Fox News, and has received support from online Russian bots and the Russian news media, has caused consternation among establishment Democrats. The New York Times recently wondered, “What, exactly, is Tulsi Gabbard up to?”

Neera Tanden, a former Clinton adviser who heads the Center for American Progress, predicted in July that Gabbard would run as a “third party Green candidate to help Trump win” after Gabbard attacked Sen. Kamala Harris during a Democratic presidential debate. CNN commentator Bakari Sellers declared that Gabbard is the “antithesis” of what the Democratic field stands for and claimed “there is no question that Tulsi Gabbard … is a puppet for the Russian government.”

Gabbard, who supported Bernie Sanders in the 2016 race, hit back at her critics during Tuesday’s Democratic debate.

“The New York Times and CNN have also smeared veterans like myself for calling to an end to this regime-change war,” she said, referring to Syria. “Just two days ago, the New York Times put out an article saying I am a Russian asset and an Assad apologist and all these different smears. This morning a CNN commentator said on national television that I’m an asset of Russia. Completely despicable.”

Gabbard said that Trump “has the blood of the Kurds on his hands” but explained that she holds both parties responsible for supporting what she described as a “regime-change war.”

“So do many of the politicians in our country from both parties who have supported this ongoing regime-change war in Syria that started in 2011, along with many in the mainstream media, who have been championing and cheerleading this regime-change war,” she said.

Earlier this year, Gabbard vowed not to run as a third-party candidate if she does not win the Democratic nomination.

“I've ruled that out,” she told CNN in August. “I’m going to continue to focus on moving our campaign forward, continuing this grassroots campaign, continuing to deliver our message to the American people.”

Glenn Greenwald, the founder of The Intercept and frequent Gabbard defender, alleged that the unease Democrats feel about Gabbard is based on her accusations that the Democratic Party rigged the 2016 primary against Sanders and her opposition to “Washington orthodoxy” on foreign policy.

"What's really going on is twofold: One is that in 2016 she resigned from the Democratic National Committee because she accused Debbie Wasserman Schultz and the DNC of cheating on behalf of Hillary, and then supported Bernie Sanders, so Democrats hate her for that,” Greenwald said in an appearance on Fox News.

"They also hate her because she's been questioning a lot of Washington orthodoxy that both political parties support, including why it is that we continue to try to change the regimes of countries far away like in Syria, and why we continue to prop up regimes that make the world hate us, like in Saudi Arabia."

Pressed on Clinton’s allegations in the interview with Plouffe, the Clinton camp doubled down.

Asked if the 2016 nominee had been referring to Gabbard, Hillary spokesman Nick Merrill told CNN’s Rebecca Buck, “If the nesting doll fits.”

“This is not some outlandish claim,” he added. “This is reality.”