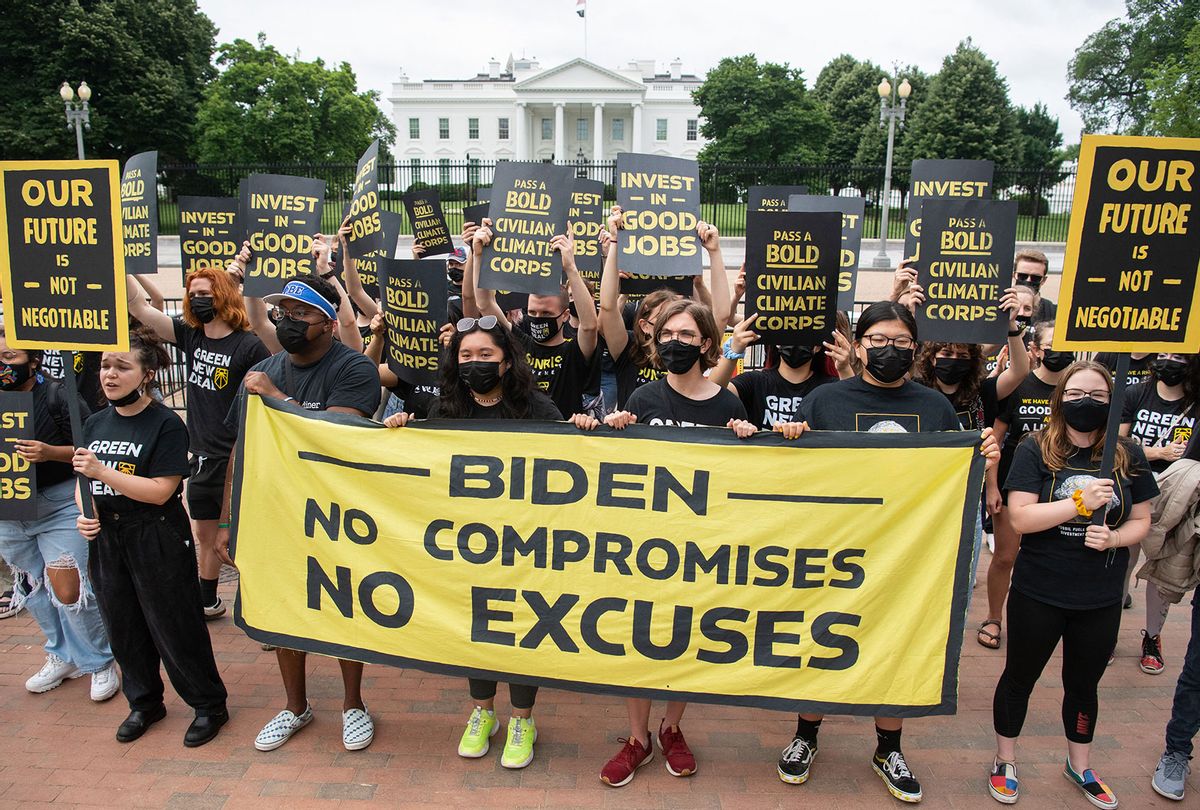 Protesters with the Sunrise Movement protest in front of the White House against what they say is slow action on infrastructure legislation, job creation and addressing climate change, as well as against attempts to work with Senate Republicans in Washington, DC, June 4, 2021. (SAUL LOEB/AFP via Getty Images)
--

House Democrats encouraged President Biden to renew negotiations on the climate objectives included in the stalled Build Back Better legislation in a letter to the president on Monday. The letter, signed by 89 progressive and moderate Democrats including six committee chairs, calls for an acceleration in the White House's clean energy agenda.

The Build Back Better Act, a Democrat led social spending bill, was blocked in its final stages by West Virginia Senator Joe Manchin in December 2021. The legislation included allocating $555 billion towards clean energy, the largest investment towards climate in U.S. history.

The letter comes a week after Manchin elaborated on what he wanted to see from a Democrat led spending bill. While the senator has been clear about his firm opposition to the proposed spending bill, he said he is open to supporting a smaller package.

"I've said I'm open to talk to everybody, I always have been," said Manchin. "I just want to make sure we find a balance, and something we can afford, and do it and do it right, whatever we do."

The letter stresses the urgency of the climate crisis saying, "Throughout 2021, we bore witness to the devastating impacts of the climate crisis, further illustrating why transformational action cannot wait. Inaction now will mean irreversible consequences for our future generations."

A report from the Intergovernmental Panel on Climate Change (IPCC) released on February 28th concluded our planet is running out of time. "Any further delay in concerted anticipatory global action on adaptation and mitigation will miss a brief and rapidly closing window of opportunity to secure a livable and sustainable future for all," the report said. The climate legislation of the Build Back Better would provide an essential foundation for mitigating the worst social, environmental, and economic impacts of our warming world.

"In just the past four years, record setting wildfires, superstorms, and heat waves have already cost our country tens of billions of dollars more in damages," the House Democrat's letter states. "Damages have also included the loss of homes and the displacement of families across the country—the effects of which disproportionately impact communities of color. It is clear that climate change is a threat multiplier to our economy."

Democratic Representatives Jamaal Bowman of New York, Nikema Williams of Georgia and Sean Casten ( led efforts behind the letter. House Speaker Nancy Pelosi and House Majority Leader Steny H. Hoyer were not among the signatories. In a tweet following the publication of the letter, Bowman said "There is no other way to say it: fossil fuels are killing us."

Representative Sean Casten said Democrats should take the political opportunity to capitalize on the clean energy leader in the White House, the "science-affirming" Congressional majority, and the demands for climate legislation by the American people.

"Every day we fail to reach an agreement on the baseline climate investments passed by the House is a day American families and businesses pay the price at the pumps and oil-rich oligarchs profit. Restarting negotiations with climate action is the clearest if not the only path forward to deliver tangible results to the American people," Casten said.

Passing only the climate proportions of the Build Back Better Act could place other social spending initiatives at risk, reports The Hill. However, as Bowman says, "In the midst of escalating wars caused by fossil fueled authoritarianism, it is clearer than ever that we need historic investments in clean energy now."