Russia's war is an inexcusable crime — but the U.S. is not a credible force for peace 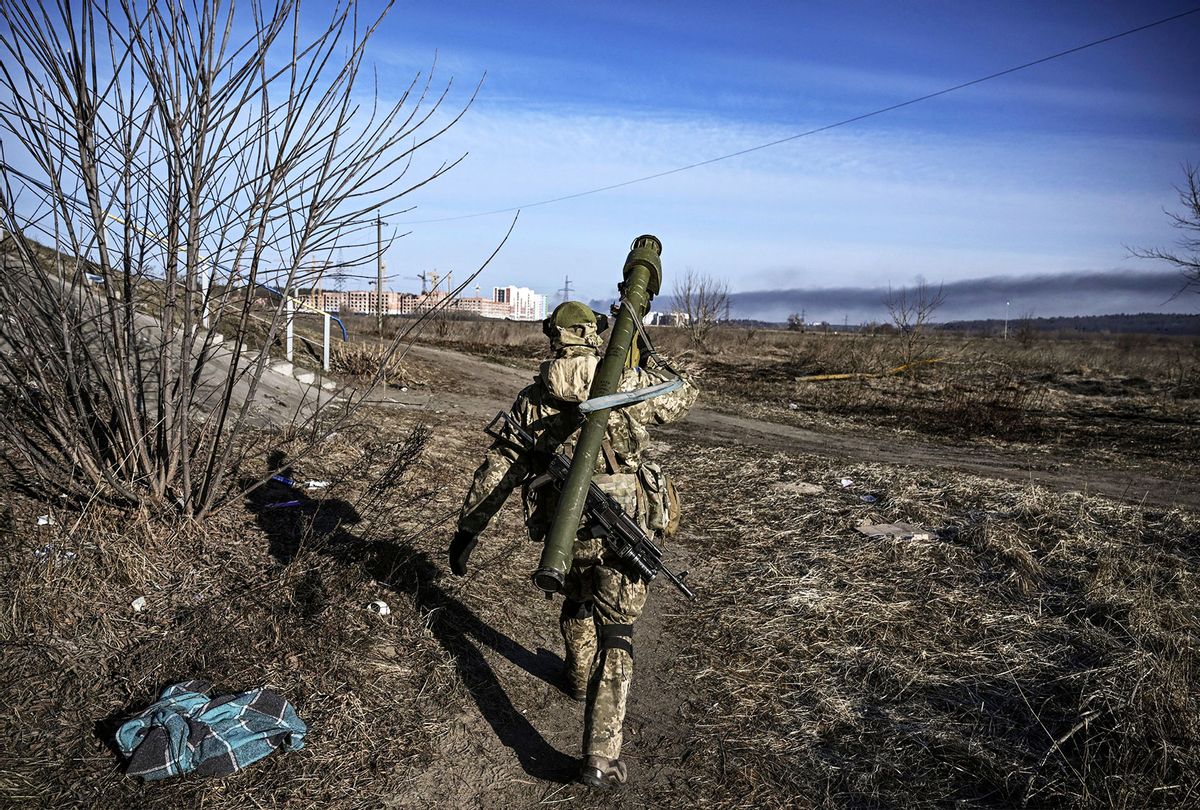 A Ukrainian serviceman walks towards the front line in the city of Irpin, northern Ukraine, on March 12, 2022. - Russian forces are positioned around Kiev on March 12, 2022 and are "blocking" Mariupol, where thousands of people are suffering a devastating siege, in southern Ukraine, a country that has been bombed for more than two weeks. (ARIS MESSINIS/AFP via Getty Images)
--

Russia's war in Ukraine — like the U.S. wars in Afghanistan and Iraq — should be understood as barbaric mass slaughter. For all their mutual hostility, the Kremlin and the White House are willing to rely on similar precepts: Might makes right. International law is what you extol when you aren't violating it. And at home, rev up the nationalism to go with the militarism.

While the world desperately needs adherence to a single standard of nonaggression and human rights, some convoluted rationales are always available in a quest to justify the unjustifiable. Ideologies get more twisted than pretzels when some people can't resist the temptation to choose up sides between rival forces of terrible violence.

In the United States, with elected officials and mass media intensely condemning Russia's killing spree, the hypocrisy can stick in the craw of people who remain mindful that the Afghanistan and Iraq invasions started massive protracted carnage. But U.S. hypocrisy in no way excuses the murderous rampage of Russia's war on Ukraine.

At the same time, hopping on a bandwagon of the U.S. government as a force for peace is a fantasy journey. The U.S. is now in its 21st year of crossing borders with missiles and bombers — as well as boots on the ground — in the name of the "war on terror," and its military spending is more than 10 times higher than Russia's.

It's important to shed light on the U.S. government's broken promises that NATO would not expand "one inch eastward" after the fall of the Berlin Wall. Expanding NATO to Russia's border was a methodical betrayal of prospects for peaceful cooperation in Europe. What's more, NATO became a far-flung apparatus for waging war, from Yugoslavia in 1999 to Afghanistan a few years later to Libya in 2011.

The grim history of NATO since the disappearance of the Soviet-led Warsaw Pact military alliance more than 30 years ago is a saga of slick leaders in business suits bent on facilitating vast quantities of arms sales — not only to longtime NATO members but also to countries in Eastern Europe that recently gained membership. The U.S. mass media makes a careful collective detour around mentioning, much less illuminating, how NATO's dedication to avid militarism keeps fattening the profit margins of weapons dealers. By the time this decade began, the combined annual military spending of NATO countries had hit $1 trillion, about 20 times Russia's.

After Russia launched its invasion of Ukraine, denunciations of the attack came from one U.S. antiwar group after another after another, which had long opposed NATO's expansion and war activities. Veterans for Peace issued a cogent statement condemning the invasion while saying that "as veterans we know increased violence only fuels extremism." The organization said that "the only sane course of action now is a commitment to genuine diplomacy with serious negotiations — without which, conflict could easily spiral out of control to the point of further pushing the world toward nuclear war."

The statement added that "Veterans for Peace recognizes that this current crisis did not just happen in the last few days, but represents decades of policy decisions and government actions that have only contributed to the building of antagonisms and aggressions between countries."

We should be clear and unequivocal that Russia's war in Ukraine is an ongoing, massive, inexcusable crime against humanity for which the Russian government is solely responsible. But we should be under no illusions about the U.S. role in normalizing large-scale invasions while flouting international security. And the geopolitical approach of the U.S. government in Europe has been a precursor to conflict and foreseeable calamities.

Consider a prophetic letter to then-President Bill Clinton that was released 25 years ago, with NATO expansion on the near horizon. Signed by 50 prominent figures in the foreign-policy establishment — including a half-dozen former senators, former Defense Secretary Robert McNamara and such mainstream luminaries as Susan Eisenhower, Townsend Hoopes, Fred Iklé, Edward Luttwak, Paul Nitze, Richard Pipes, Stansfield Turner and Paul Warnke — the letter makes for chilling reading today. It warned that "the current U.S.-led effort to expand NATO" was "a policy error of historic proportions. We believe that NATO expansion will decrease allied security and unsettle European stability."

The letter went on to emphasize: "In Russia, NATO expansion, which continues to be opposed across the entire political spectrum, will strengthen the nondemocratic opposition, undercut those who favor reform and cooperation with the West, bring the Russians to question the entire post-Cold War settlement, and galvanize resistance in the Duma to the START II and III treaties. In Europe, NATO expansion will draw a new line of division between the 'ins' and the 'outs,' foster instability, and ultimately diminish the sense of security of those countries which are not included."

That such prescient warnings were ignored was not happenstance. The bipartisan juggernaut of militarism headquartered in Washington was not interested in "European stability" or a "sense of security" for all countries in Europe. At the time, in 1997, the most powerful ears were deaf to such concerns at both ends of Pennsylvania Avenue. And they still are.

While apologists for the governments of either Russia or the U.S. want to focus on some truths to the exclusion of others, the horrific militarism of both countries deserves only opposition. Our real enemy is war.

Read more on the Ukraine war and its consequences: