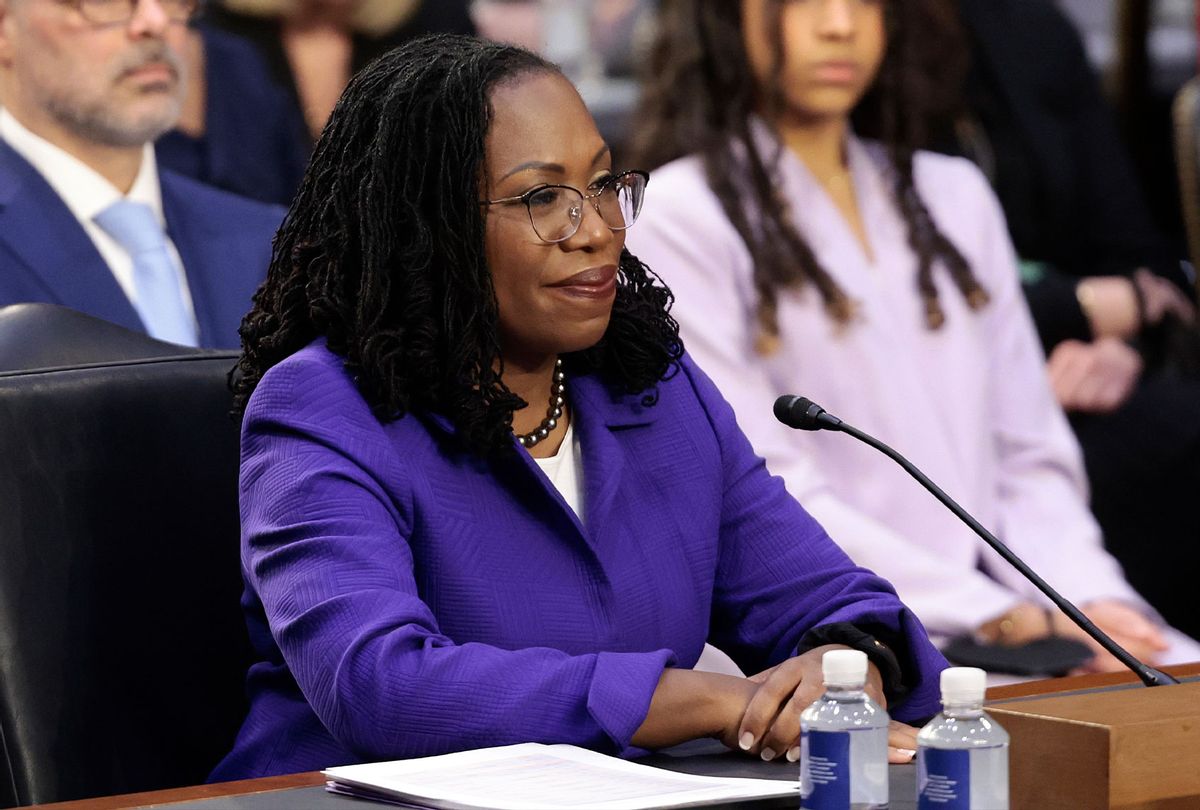 Progressive advocacy groups and other backers of Judge Ketanji Brown Jackson's nomination to the U.S. Supreme Court renewed calls for senators to swiftly confirm her as the Senate Judiciary Committee on Monday kicked off four days of hearings.

While GOP attacks of Jackson have mounted since President Joe Biden last month announced her historic nomination to fill the seat of retiring Justice Stephen Breyer, supporters have celebrated the Harvard-trained attorney's record as a federal judge, member of the U.S. Sentencing Commission, and public defender.

"President Biden has honored his promise to nominate a justice to the court that truly reflects the American public," she continued, "and now the Senate must do its part by confirming Ketanji Brown Jackson."

That message was echoed by activists who rallied in Washington, D.C. on Monday to express support for Jackson's nomination, carrying signs that said "#ConfirmJackson" and "Our Supreme Court should look like all of us."

Harvey said that "from the moment Judge Jackson was announced as President Biden's nominee, it was clear her exceptional qualifications and experience as a public defender would bring an invaluable perspective to the Supreme Court."

"Senate Republicans have stumbled over themselves to justify their opposition to this supremely qualified candidate," she noted. "Instead of carrying out their constitutionally mandated duty to 'advise and consent,' they're choosing to lie and fearmonger."

After Sen. Josh Hawley (R-Mo.) took aim at Jackson in tweets about some of her rulings as a federal judge last week, Senate Judiciary Committee Chair Dick Durbin said Sunday that "as far as Sen. Hawley is concerned, here's the bottom line: He's wrong."

"He's inaccurate and unfair in his analysis," Durbin said of Hawley in a televised interview. "Judge Jackson has been scrutinized more than any person I can think of. This is her fourth time before the Senate Judiciary Committee, and three previous times, she came through with flying colors and bipartisan support."

"This was the man who was fist-bumping the murderous mob that descended on the Capitol on January 6 of last year," the chair added of the GOP senator, referencing an infamous action caught on camera. "He doesn't have the credibility he thinks he does."

As the Senate Judiciary Committee began confirmation hearings, the Lawyers' Committee for Civil Rights Under Law released a report evaluating Jackson and recommending her confirmation.

"After carefully vetting Judge Ketanji Brown Jackson's record, it is clear that she has the extraordinary qualifications, experience, and character to serve the nation on the Supreme Court," said Damon Hewitt, the committee's president and executive director.

Judge Jackson's extraordinary legal career demonstrates that she will be a champion for justice, and a defender of civil rights, and can be counted on to be fair and impartial as the court decides some of the most monumental cases of our time. She is the right person for this moment and will help the Supreme Court return to its highest calling of being a driver of fairness and equality.

Alongside the report, the committee released a letter to the Senate signed by over 100 members arguing that Jackson "possesses extraordinary qualifications and a breadth of experience in her legal career, and she is exceptionally well-qualified" to serve on the court.

Other advocates of voting rights, reproductive freedom, and climate action also made their support for Jackson clear on Monday.

"Our environmental laws are only as strong as the judges who uphold them, and Judge Jackson's record shows that she will decide cases based on facts, science, and settled law—not political ideology," said Earthjustice president Abigail Dillen. "With her stellar qualifications and her lived experiences as a federal judge and public defender and as a Black woman in this country, Judge Jackson will bring essential perspectives to the Supreme Court."

"As the court takes up questions with profound implications for people's lives, our climate and environment, and our democracy, we need someone with the temperament and judicial qualifications to uphold the law with fairness and a deep commitment to justice," she asserted. "Judge Jackson is that person."

Greenpeace USA Democracy Campaign director Folabi Olagbaju said that "I understand what it's like to overcome systemic hurdles Black and Brown communities across the U.S face. That is why I am proud to acknowledge that Judge Jackson's sterling judicial credentials and her lived experience make her uniquely qualified for a seat on the highest court of the land."

"The Supreme Court determines whether the government can take action on the most important issues of our time, from combating the climate crisis to upholding our right to clean air and water, and protecting our right to vote," Olagbaju added. "Because this year, the court is expected to decide on several important environmental cases, it is urgent for Judge Jackon to be confirmed without delay following the Senate hearing this week."

Jackson's hearings began as 73-year-old Justice Clarence Thomas, part of the nine-member court's right-wing supermajority, was hospitalized for an infection. The court said in a statement Sunday night that "he expects to be released from the hospital in a day or two."