Despite the military being the second-largest economic sector, Hawaiians are fed up with their malfeasance 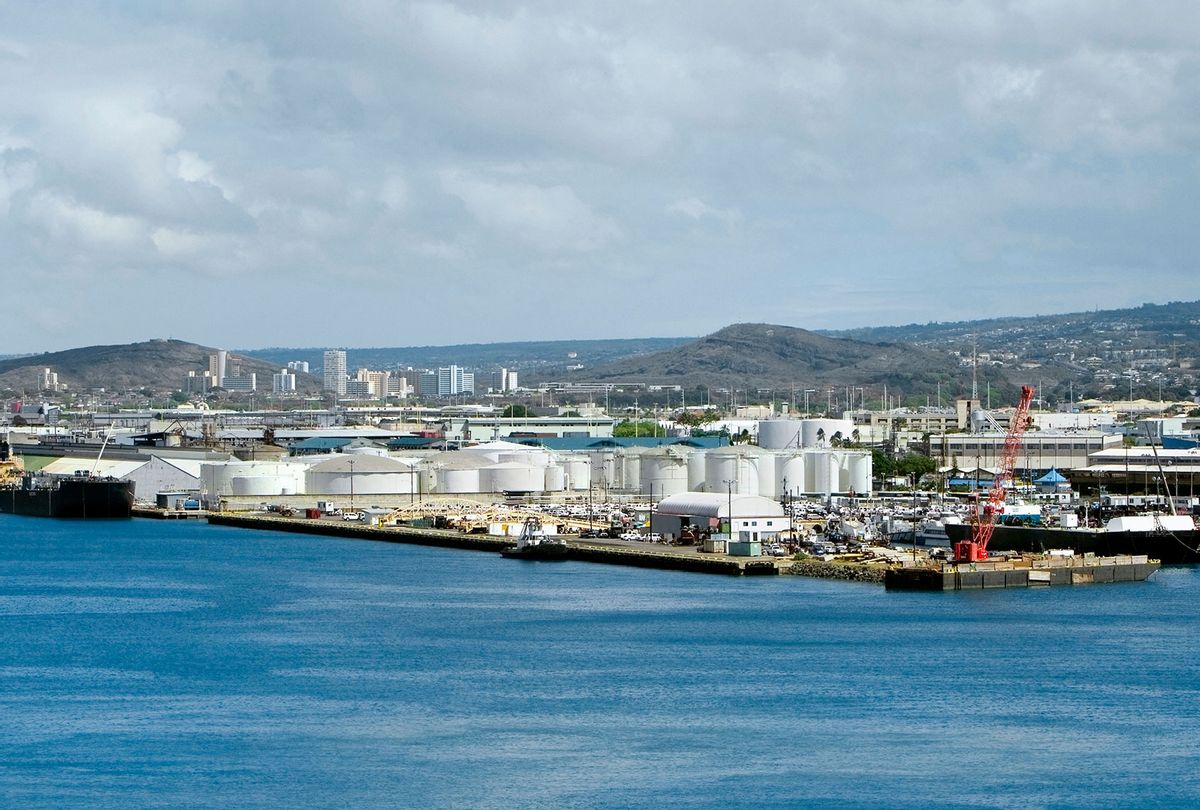 An unassuming mountain of iron-rich basalt, the vestige of ancient lava flows, conceals the single largest fuel repository in the world — but not for long. Seeping through the same volcanic rock, the only reliable freshwater source on the Hawaiian island of O'ahu, contamination of the Southern O'ahu Basal Aquifer was perhaps inevitable. In November 2021, it finally happened: an estimated 19,000 gallons of fuel and water burst from a fire suppression line and seeped underground, poisoning the aquifer.

Now, after an understandable uproar among hundreds of thousands of affected citizens, the United States will decommission the Red Hill Underground Fuel Storage Facility. For indigenous activists like the Kaʻohewai Coalition and the Oʻahu Water Protectors who have long fought to have the fuel storage facility decommissioned, the victory is bittersweet: It took jet fuel running from the tap for people to demand change, despite billions of dollars in economic activity at stake.

"Businesses and politicians are reticent to do anything that might reduce what they see as a military contribution to the economy," Wayne Tanaka, Sierra Club of Hawai'i director, told Salon. Indeed, after tourism, defense is Hawaii's largest economic sector.

"The Navy has done a pretty good job of pointing to a lot of very dense technical reports and documents to kind of try and convince people that they are able to plan for everything that could happen and prevent harm from befalling us," Tanaka continued. "That's been proven to be false over recent months and years. It's really unfortunate that it was hundreds of thousands of people being poisoned that is what got people to wake up and see that the Navy's assurances can't be trusted."

However, notions of dilapidated WWII-era equipment leading to water contamination this past year are categorically untrue. Human error sent 19,000 gallons into the aquifer, contaminating the Joint Base Pearl Harbor-Hickam, and leaving nearly 100,000 people without access to clean water. Months later, when the Hawaii Department of Health ordered the closure of the facility, the Navy refused and filed a law suit against the Hawaii Department of Health.

Having initially denied claims of fuel presence in drinking water, and illegally flushing contaminated water on streets, the Navy was reluctant to do anything substantive before the Department of Health's tests confirmed what military personnel had told them for weeks. In a December press release, Secretary of the Navy Carlos Del Toro assured people that every possible action was being taken to remediate the issue.

"We are aiming for a new normal: One where this never happens again," Del Toro claimed. "The Department is determined and committed to making the necessary changes. We can and will take care of our people, while also preserving and protecting our national security interests in the Pacific and at home."

RELATED: Nearly 2,000 gallons of jet fuel spilled from an Amazon aircraft in Kentucky

Army Major Amanda Feindt described very different sentiments from Del Toro when she spoke briefly with him at Camp Smith, according to Hawaii News Now.

"Major Feindt, nothing in life is pure, so the water is not going to be completely clean, but the DOH [Department of Health] has set these standards and the Navy is well below those standards," Del Toro reportedly told her.

Notably, Del Toro has also refused to call the water contamination a crisis, though petroleum hydrocarbons in the water reached levels 350 times the permissible limit and thousands of reports surfaced of individuals reporting becoming sick. The military eventually provided alternative housing for 3,000 families with ties to the base.

"We're going to need to continue standing together to get us through this ongoing crisis," Tanaka emphasized. "To hold their responsible parties accountable, because it's going to cost millions of dollars and [take] years to deal with the current situation. To find a way to get safe access to the aquifer that's currently being cut off to prevent this year's long crisis from turning into a lifelong catastrophe."

Over 400,000 residents depend on the aquifer, which rests just 100 feet beneath 20 fuel storage tanks with a 250 million gallon capacity for marine diesel and jet fuel. According to the Navy's own risk assessment, continuous leakage is expected and large spills are nearly inevitable. Defueling remains a daunting task. Further contamination could occur without proper precautions, but it may bring a strange saga of blunders to a conclusion as the government pays for remediation.

"Our water commission was really promised that we'd never have a catastrophic leak, that they had the most thorough and robust systems in place to prevent any future spills." Dr. Kamanamaikalani Beamer told WKYC. "We were promised that they would never allow their own servicemen and women to be poisoned because we all drank out of the same aquifer. However, none of those things were truthful."

Just a few years ago, Congress was willing to accept that risk. Beamer was a member of the State Water Resource Management Commission when 27,000 gallons of jet fuel leaked from a single storage tank in 2014. Indeed, such leaks are part of a larger trend: since 1943, over 70 leaks have released at least 180,000 gallons of fuel.

On March 7, Secretary of Defense Lloyd J. Austin III announced the decision to permanently close what Congress has characterized as an irreplaceable "national strategic asset" in the Pacific theater.

"If the facility were closed, the United States Armed Forces would be unable to support the National Military Strategy, including the goals of the United States Pacific Commander, and national security interests would be significantly undermined," read the Red Hill Oversight and Environmental Protection Act of 2017.

Calling the United States military "good stewards" of land, Defense Secretary Austin offered an apology to service members, employees of the state, and their families in his remarks.

"Your health has been impacted, your lives and livelihoods have been disrupted, and in many cases, your very homes have been rendered unavailable to you," he stated. "We owe you the very best health care we can provide, answers to your many questions, and clean, safe drinking water. Quite frankly, we owe you a return to normal. And you have my commitment to that end."

Contrary to any notions that these incidents were isolated, when the Navy lost its exemption status from permits to operate in 2019 and had to undergo a hearing to receive a permit to operate, expert witnesses testified to the inability of the Navy to effectively manage the massive amounts of overhaul necessary to maintain a massive, aging facility and effectively monitor and respond to leaks. During this process, the Navy covered up a leak that occurred in the previous year.

Prior to an Administrative Order of Consent promising transparency from the Navy to the public after the 2014 leak, the historical record of inspections is almost nonexistent. What is clear is that major leaks occurred as early as 1948 when an earthquake caused the spill estimated to be around 48,000 gallons. The Navy was well aware of the impact of continued operations.

"We are grounded in cultural values about caring for each other, about caring for our home and the land and environment that provides a foundation of our way of life," Tanaka added. "That mass mobilization up and down the political spectrum and across all walks of life effectively got us pretty far. We already have a concession now from the biggest, most powerful military, the biggest bureaucracy in the world."

Both the Department of Health and, later, Congress, advocated for closure of the bulk fuel depot on Hawaii.

"On the one hand, [we're] really feeling devastated that it's come to this and really scared for what this means for the future of life on O'ahu," Shelley Muneoka, a member of the O'ahu Water Protectors, told Waging Nonviolence. "On the other hand, [we're] really having to dig deep to activate and motivate. All of a sudden, every day, tons of things are happening."

Tanaka emphasized the challenges that investment in new storage facilities would present, highlighting that not all system breaches are the result of corrosion or some age related factor. Spills happen as a consequence of there being something to spill — and when what's being stored is hazardous, that has dire consequence for human as well as ecosystem health.

"My hope is that the high-profile nature of the crisis that's still occurring in Hawaii is going to contribute to larger conversation about the numerous communities not just in the continental United States, but in other areas where the US is occupying land who are dealing with the contamination of their water systems and water sources," Tanaka said.

Read more on water and pollution: