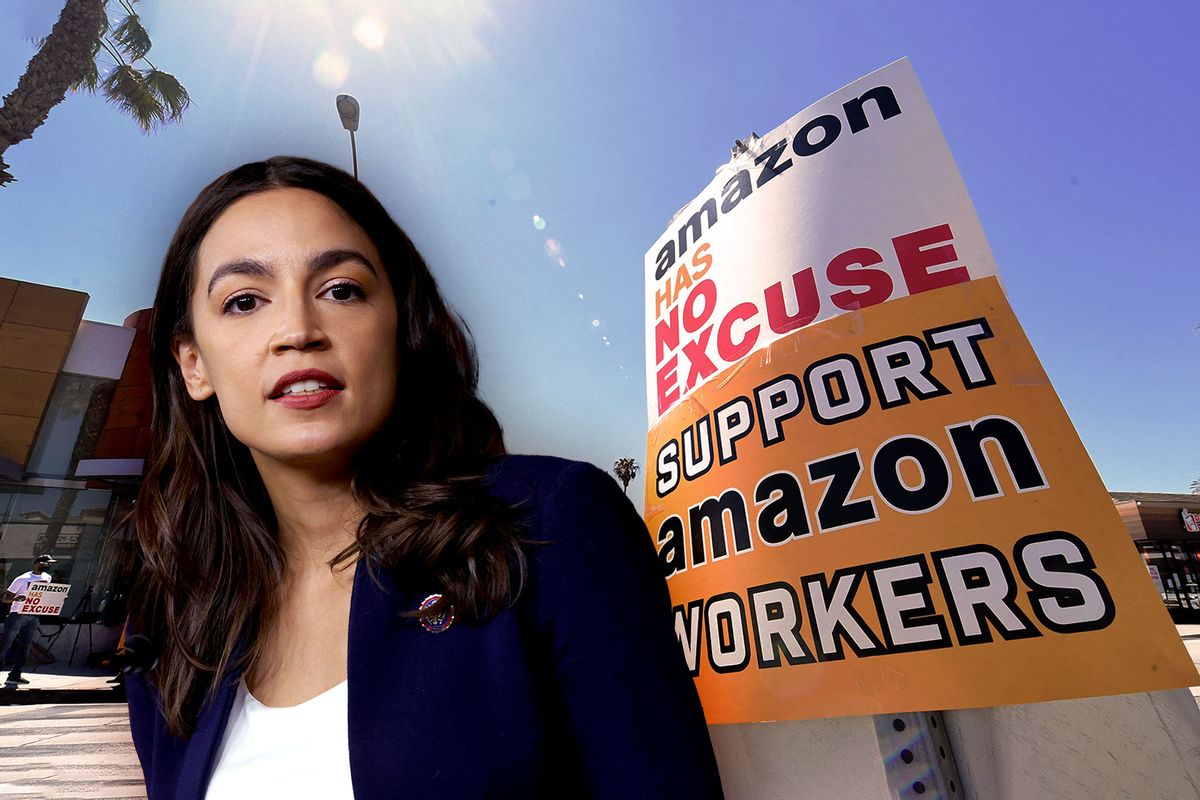 Alexandria Ocasio-Cortez | Supporters of Amazon workers protest in front of Fidelity Investments, one of the company's largest shareholders on May 24, 2021 in Santa Monica, California. (Photo illustration by Salon/Getty Images)
--

Rep. Alexandra Ocasio-Cortez, D-N.Y., is in hot water for promoting an employee-led organizing effort at Amazon after critics noted that she backed out of a speaking engagement with those same employees during a union rally last summer.

The spat played out over Twitter on Thursday, when the Amazon Labor Union, which recently held a successful union vote at an Amazon facility in New York City's Staten Island, revealed that it was winning by 400-vote margin.

About an hour later, Ocasio-Cortez expressed solidarity with the union. But that comment did not sit well with some leftist commentators, including most notably, Krystal Ball, a host of the "Breaking Points" podcast.

"Here's the guy who organized the union drive talking about how you left them high and dry," Ball responded, tweeting a video of her interview with Amazon labor organizer Christian Smalls. "These are your constituents and you couldn't be bothered to show up until they're on the cusp of victory."

For his part, Smalls also piled on Ocasio-Cortez, who represents parts of Queens and the Bronx.

"So what exactly is the insinuation here?" the progressive lawmaker shot back. "That we are secretly in the tank for Amazon? That we're 'sellouts' despite leading congressional investigations into Amazon, taking huge blowback to call out the scam HQ2 deal, meeting with workers in our district warehouses? It's reaching."

The exchange appears to stem from an incident last August when Ocasio-Cortez was slated to appear for a speech at a rally held by the Amazon Labor Union. Before the event, however, the progressive lawmaker unexpectedly canceled her appearance over "scheduling conflicts" and "security concerns."

"Security was an issue as well. 2021 included a lot of high level threats on my life, which limited what activities I was able to do, especially those outside," as Ocasio-Cortez explained over Twitter. "The combination of that + when we are able to get resources/time to secure them creates scheduling + logistical conflicts."

On Friday, the Amazon Labor Union in Staten Island officially voted to unionize, marking one of the biggest labor victories in modern American history. According to the National Labor Relations Board, the union vote won by more than 10 percentage points with 2,654 votes for the Amazon Labor Union and 2,131 against. The Staten Island facility, which employs roughly 6,000 workers, is now the first Amazon facility in the company's history to join a union.

During the leadup to the union drive, Amazon aggressively fought to stamp out the organizing effort, posting anti-union signage in its facility, holding mandatory weekly meetings about the alleged ills of unionization, and hiring a Democratic consultancy to advise them on various union avoidance tactics.

RELATED: Amazon election: Why union votes are so tough for labor to win

The Amazon Labor Union was led by Smalls, a former Staten Island Amazon worker who alleges he was fired back in 2020 for organizing protests against the company's non-observance of social distancing amid the spread of COVID-19.

"I say what I say and that's what got me here," Smalls told Bloomberg before the election. "The same thing with the union: It represents what the workers want to say."

On Friday, the House of Representatives opened a federal probe into Amazon's unfair labor practices. Leaders of the inquiry, which includes Ocasio-Cortez, have demanded that the company hand over documents related to its labor policies and procedures, particularly when it comes to severe weather events like the Illinois tornado that ripped through an Amazon warehouse back in January, killing six workers who were told to stay despite fearing for their safety. She also joined Rep. Carolyn Maloney, D-N.Y., in a letter to Amazon demanding more information about its worker safety protocols.