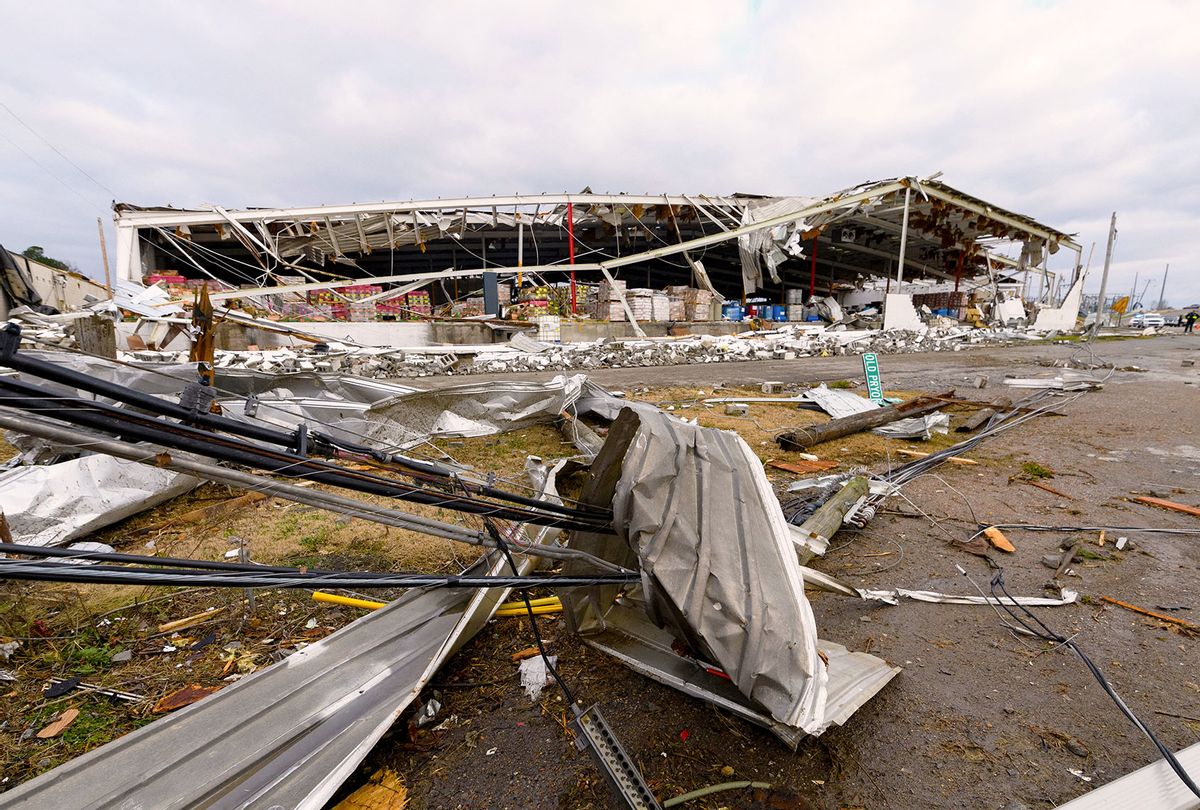 An Amazon worker who was killed in the devastating tornado outbreak across the midwest this past weekend was reportedly barred from leaving his warehouse as the storm approached. Amazon reportedly refused to initially excuse another employee's absence in the storm's immediate aftermath. Now, after an entire Amazon warehouse collapsed, federal officials have opened an investigation into the megacorporation.

The Occupational Safety and Health Administration has opened an investigation into the collapse of an Amazon warehouse in Illinois last week. Larry Virden, 46, was killed Friday night in Illinois when a deadly tornado caused the roof to cave in at his Amazon facility. Virden, who began working for the company just five months ago, was just one among six other Amazon warehouse workers to perish.

"I got text messages from him [that night]," Virden's girlfriend of thirteen years, Cherie Jones, told the Post. "He always tells me when he is filling up the Amazon truck when he is getting ready to go back … I was like 'OK, I love you.' He's like, 'well Amazon won't let me leave until after the storm blows over.'"

RELATED: Amazon's labor exploitation is a return to the 1920s — and unions are our best hope out

"It's that what-if situation: what if they would have let him leave?" Jones added. "He could have made it home."

Amazon has claimed that it attempted to alert as many workers as possible about the tornado warning issued by the state. According to Bloomberg, the company has enforced a years-long policy of barring personal phone usage for blue-collar workers during their shifts, preventing them getting minute-by-minute updates on deadly storms in tornado-prone areas. Despite this policy, Reuters reported that some workers in Edwardsville had kept their phones with them in case the tornado hit their facilities.

"After these deaths, there is no way in hell I am relying on Amazon to keep me safe," an Amazon employee in a nearby Illinois facility told Bloomberg. "If they institute the no-cellphone policy, I am resigning."

The National Weather Service said the tornado plowed through the warehouse with a wind speed of 150 miles per hour, ripping off 11-inch thick concrete walls designed for storm protection.

RELATED: Amazon's minimum wage hike is not what it seems

An Amazon spokesperson said that the company is "saddened by the news that members of our Amazon family passed away as a result of the storm in Edwardsville, IL. Our thoughts and prayers are with the victims, their loved ones, and everyone impacted by the tornado."

Search and rescue efforts in the affected areas remain underway, with the national death toll likely to surpass 100, according to the Kentucky Gov. Andy Beshear, who noted that the tornado was the most devastating in the state's history. "Nothing that was standing in the direct line of [one] tornado is still standing," Beshear said.

On Sunday, President Joe Biden declared the storm a major disaster, providing federal aid to at least eight counties. According to CNN, the move will provide grants and low-cost loans to residents seeking permanent housing and home repairs.