Amazon’s minimum wage hike is not what it seems 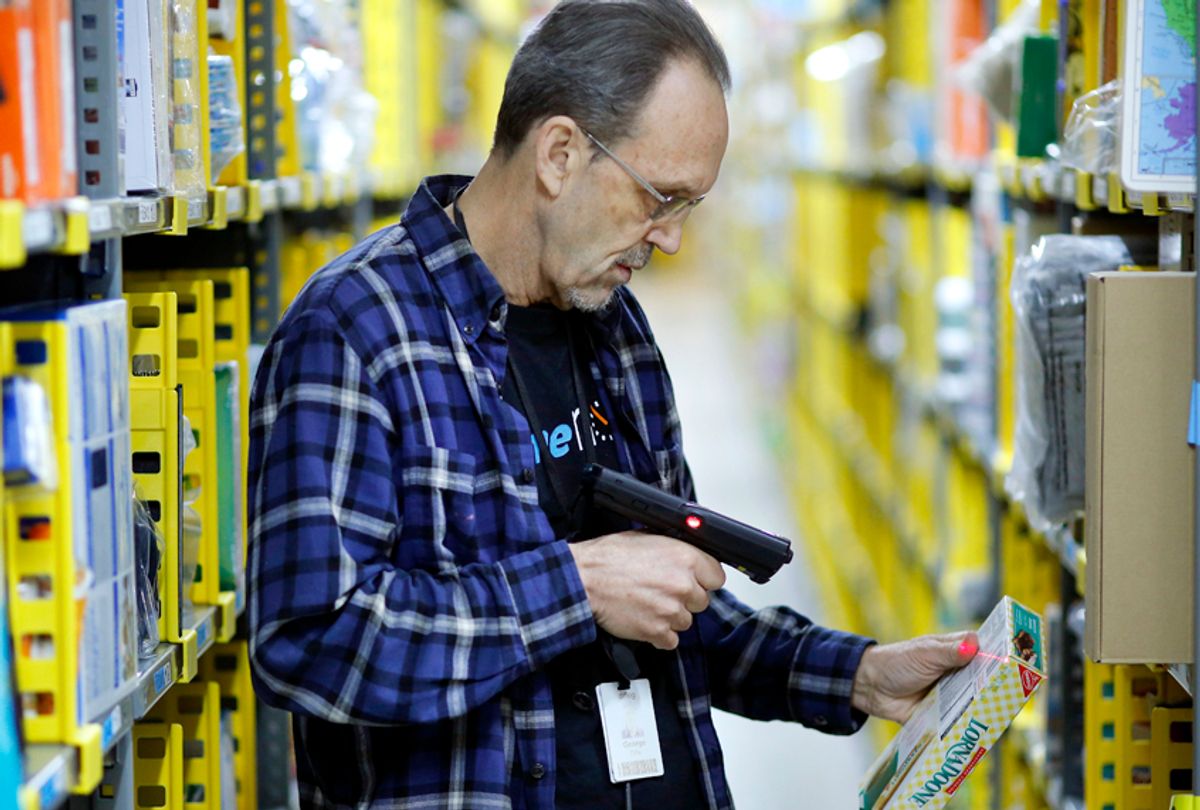 A clerk picks an item from a shelf and scans it to fill a customer order at the Amazon Prime warehouse in New York. (AP/Mark Lennihan)
--

Online retail behemoth Amazon has faced much scrutiny in recent months over the disparity between its CEO, Jeff Bezos — who is the richest man in the world — and the company’s low-wage warehouse workers, who toil in horrifying conditions and yet without whom the company would cease to function. Naturally, that disparity has been the subject of criticism from progressive Sen. Bernie Sanders (I-Vt.), who has been waging a PR war of sorts calling out Amazon over its worker abuses and low pay. Sanders, along with Rep. Ro Khanna (D-Calif.) recently proposed a bill, known as the "Stop Bad Employers by Zeroing Out Subsidies Act" (or "Stop BEZOS Act") which would levy a tax on big corporations like Amazon.

When Amazon announced on Tuesday it was raising the minimum wage for its U.S. employees to $15 an hour, effective next month, many saw it as a huge victory for progressives and labor advocates — and Amazon's response to the criticism.

"Today I want to give credit where credit is due," Sanders said in a statement. "What Mr. Bezos has done today is not only enormously important for Amazon's hundreds of thousands of employees, it could well be, and I think it will be, a shot heard around the world. Further, Mr. Bezos has indicated his support to raise the federal minimum wage. As the author of the $15 per hour minimum wage bill in the Senate, I look forward to working with him in this area,” he added.”

Amazon stated that their minimum wage increase to $15/hour will apply to all full-time, part-time, temporary (those hired by temp agencies are included), and seasonal employees across the United States. The $15/hour wage will go into effect on November 1. In a statement, Bezos made a point to acknowledge the wage increase is a result of listening to the company’s “critics.”

"We listened to our critics, thought hard about what we wanted to do, and decided we want to lead," Bezos said in a statement. "We're excited about this change and encourage our competitors and other large employers to join us."

Jay Carney, Senior Vice President of Amazon Global Corporate Affairs, corroborated this and said the company plans to advocate for higher wage policies in the public sector — an issue that Sanders, too, has advocated for.

“We will be working to gain Congressional support for an increase in the federal minimum wage. The current rate of $7.25 was set nearly a decade ago,” Carney said. “We intend to advocate for a minimum wage increase that will have a profound impact on the lives of tens of millions of people and families across this country.”

Yet not too longer after Bezos's announcement, some Amazon warehouse workers began to allege that Amazon's minimum wage hike was little more than a publicity stunt. Multiple workers note that simultaneous to the minimum wage increase, the company dropped its bonus and stock incentives programs that were meant to award senior workers.

“It's a joke,” Amazon warehouse employee Vickie Shannon Allen told NBC News. “We get no more bonuses for not missing any work.”

Allen has become famous for posting YouTube videos about her experience as an Amazon fulfillment warehouse at Haslet, Texas. She became homeless after an accident left her unable to do her job.

A spokesperson for Amazon told NBC News the cessation to these programs is meant to make compensation “more immediate and predictable,” adding that the increased wage “more than compensates” for the incentive programs.

“We can confirm that all hourly Operations and Customer Service employees will see an increase in their total compensation as a result of this announcement,” the spokesperson told NBC News.

Yahoo Finance reported that workers they spoke to under the condition of anonymity said the wage increase might lower their wages.

“Several Amazon warehouse workers in the U.S., who spoke to Yahoo Finance on the condition of anonymity fearing reprisals, talked about how the change will negatively affect them. After the removal of these perks, some workers said they will be making less. Most of the workers who voiced concerns have been working for the company for more than two years, and have been earning close to $15 an hour before the raise. While these workers’ hourly rates will rise modestly, they said they could lose thousands of dollars that they would have collected from the stock and monthly-bonus programs. Amazon said those who are already making $15 an hour will see an increase in pay but did not specify how much.”

In Amazon’s announcement, the company addressed that they will be phasing out its stock vesting program, in which they awarded some employees what are known as "Restricted Stock Units" or RSUs.

“Yes, we’ve heard from our hourly fulfillment and customer service employees that they prefer the predictability and immediacy of cash to [Restricted Stock Units],” the company stated. “We will be phasing out the RSU grant program for stock which would vest in 2020 and 2021 for this group of employees, replacing it with a direct stock purchase plan before the end of 2019. The net effect of this change and the new higher cash compensation is significantly more total compensation for employees, without any vesting requirements, and with more predictability.”

In an email statement to NBC News, Sanders said he hopes that long-time veteran workers aren’t hurt by the announcement.

“Our understanding is that the vast majority of Amazon workers are going to see wage increases, including some very significant increases as the minimum wage goes up to $15 an hour,” Sanders said. “I would hope that as a result of Amazon’s new policy, no worker, especially long-time employees, sees a reduction in total compensation. Amazon can afford to make all workers whole and should do that.”