Plus, how the actor developed that British accent 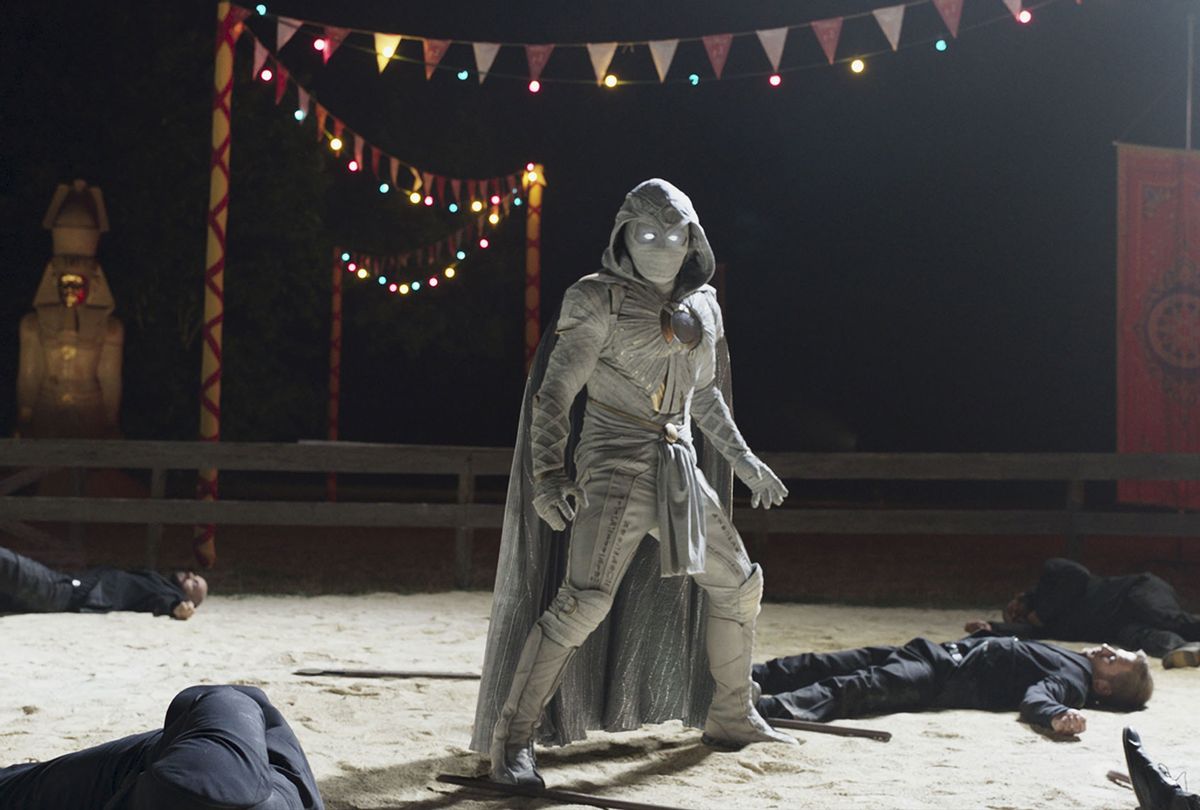 Marvel waits for no man; the next Marvel TV show, "Moon Knight," comes out March 30, and it looks a little different from what we're used to. Oscar Isaac plays mild-mannered gift shop employee Steven Grant . . . as well as Marc Spector, a hardened mercenary with whom Grant shares a body. He has dissociative identity disorder, a first for a Marvel hero. The whole show looks darker and weirder than what we've seen before in the MCU.

Isaac himself talked about this new direction at a press conference covered by Collider. "When I looked at it and I talked with [producer Grant Curtis], Kevin [Feige] and [director Mohamed Diab], it just seemed like there was a real opportunity to do something completely different, particularly in the MCU, and to really focus on this internal struggle of this character and to use Egyptian iconography and the superhero genre and this language to talk about this real internal struggle that this person is having," the actor said. "Also, we could create an indelible, unusual character, particularly with Steven Grant. Once I got a real take on how I wanted to play Steven and I brought that to everyone, and they welcomed that with open arms, I also realized I had real incredible collaborators and it was gonna be a creative adventure."

I think the story is so point of view. You're in the skin of this guy and you're seeing things happen and you're experiencing it, just as he's experiencing it. There's something terrifying about that. I think with Steven, in particular, there's a sense of humor in there that's different from what we've seen. Marvel, in particular, has done such an amazing job at combining action and comedy in such a great way. I thought with Steven, there was a chance to do different comedy than we've seen. He's someone that doesn't know he's being funny. That was really exciting. And then, we got to find the counterpoint of that with Marc, in some ways leaning into a bit of the stereotype of the tortured, dark vigilante guy, but what makes him so special is that he has this Englishman living inside of him.

That said, for all the times Isaac and his collaborators talk about "Moon Knight" forging new ground for the MCU, cutting drama and action with comedy is a pretty standard move for Marvel. We can see for ourselves how fresh "Moon Knight" feels when it premieres on Disney+ on March 30.

Playing two characters creates some issues; for instance, how do you handle scenes where the two men are talking to each other? "The first thing was that we hired my brother, Michael Hernández, to come in and be the other me," Isaac said. "It's the closest thing to me there is on Earth. He came in, and he would play other Steven or Marc. He even did the accent and everything. That was really helpful, to have someone who's not only a great actor, but who shares my DNA, to play off of."

Something I didn't anticipate was how technically demanding that was gonna be, having to show up and decide which character I was gonna play first, and then try to block that out, give my brother notes, do the scene, and then switch characters. One of the fun things about acting, if not the most fun thing, is acting opposite somebody and letting something spontaneous happen that you didn't expect. There wasn't really an opportunity to do that and still try to find what makes it feel spontaneous and not all planned out. That was challenging.

And yes, we can't ignore Isaac's much-talked about British accent as Steven. "It was set in London and when I asked why, the answer was that, 'We just have too many characters in New York,' so they made him an ex-pat in London," Isaac revealed. "I love English humor, like 'The Office' and 'Stath Lets Flats.' There's just so much of that humor that I find so funny, and I thought, 'There's an opportunity here. What if we make him English? What if Peter Sellers was approached with a Marvel project? What would he do?'"

So, I started thinking about that, and that led me to Karl Pilkington from 'An Idiot Abroad, 'not so much for the accent, but for his sense of humor, where you can't tell if he knows he's being funny. And then, I thought about the Jewish community in London and where a lot of that community is from. I started listening to accents from Northeast London. And then, I just committed to that and found this guy. It wasn't just about accents. It was also about his timidness and wanting to connect with people, but not quite knowing how.

I have a feeling I'm going to be talking in that accent a lot when the show comes out.

Of course, every superhero story has to have a good villain. For "Moon Knight," that's Arthur Harrow, a cult leader played by Ethan Hawke.

"The history of movies is paved with storytellers using mental illness as a building block for the villain," Hawke said at the press conference. "There are countless stories of mentally ill villains, but we have a mentally ill hero, and that's fascinating because we've now inverted the whole process. As the antagonist, I can't be crazy because the hero is crazy, so I have to find a sane lunatic, or a sane malevolent force."

That was an interesting riddle for me, to figure out how to be in dynamics with what Oscar was doing. Mohamed was really embracing his mental illness as a way to create an unreliable narrator. Once you've broken the prism of reality, you realize that everything the audience is seeing is from a skewed point of view, and that's really interesting for the villain. That was our riddle. We came up with somebody who was trying to save the world and who, in his mind, is Saint Harrow. He thinks he's gonna be part of the great solution.

Oscar Isaac had some "comments" about the original "Moon Knight"suit

Overall, it sounds like the actors had a lot of input on this show, not just on the performances but even on the costumes. For instance, Isaac had strong opinions about Moon Knight's superhero outfit, as director Mohamed Diab explained:

Even before Oscar came, there was a suit and we all felt it was the best suit in the world. And then, Oscar came and he had some comments. The suit is beautiful and it reminds me of the power of collaboration. Why work with one mind when you can work with 50, and it really shows in that suit. Everyone loves how different it is from all the other Marvel shows.

We'll see whether all that collaboration pays off.