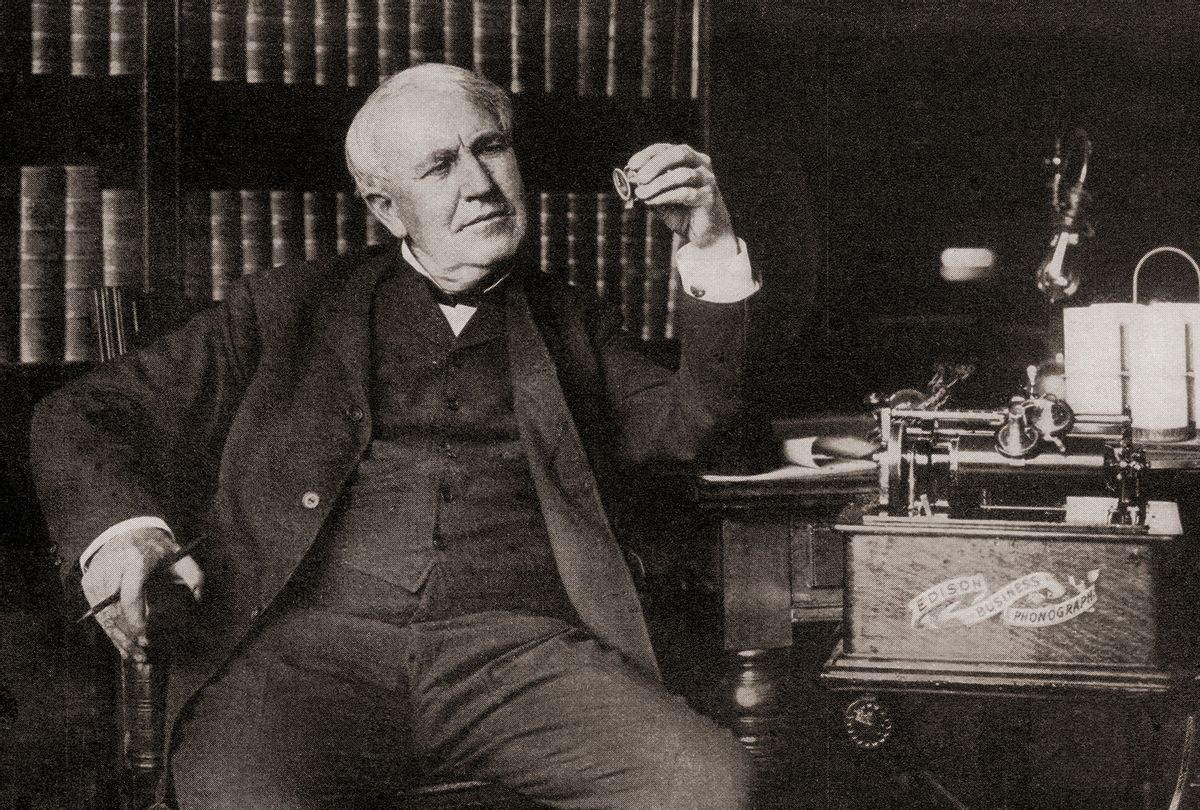 Want to make a movie? You'll need quality light fixtures, sound recording equipment, and a good motion picture camera. Thomas Alva Edison helped develop all three technologies. He was born in Milan, Ohio, on February 11, 1847, and had amassed 1093 patents by the time of his death in 1931. Here are 11 things you should know about the prolific inventor, manufacturer, and businessman.

In 1837 and 1838, pro-democracy rebels in Canada began protesting the British Crown's administration of its North American territory. Nova Scotia native Samuel Ogden Edison, Jr. was among them. During this brief but violent period, Edison marched on Toronto. Rather than face legal consequences for his actions, he later fled to the United States, where his son, Thomas, was born.

2. In his youth, Thomas Edison built a chemistry lab on a train.

The Edison family relocated from Ohio to Port Huron, Michigan, in 1854. When he was 12, Thomas Edison started selling candies and newspapers on the Grand Trunk Railroad, which carried passengers to and from Detroit. Not only did Edison set up a chemistry lab in the baggage car, but he also built a printing press for an original newspaper he created, "The Grand Trunk Herald."

When Edison patented his Electrographic Vote-Recorder machine in 1869, he thought it would speed up the voting process in American legislatures. Instead of shouting "yea" or "nay" one by one, representatives could flip a switch and have their votes tallied electronically. However, politicians didn't like the idea because, unlike the old system, it left no room for filibusters or last-minute deals. The device went unused.

As he grew older, Edison became completely deaf in one ear and partly deaf in the other. A childhood case of scarlet fever might have been the cause. "Earache came first, then deafness, and this deafness increased until at the theatre I could only hear a few words now and then," Edison wrote.

Yet he felt that his hearing problems gave him a career advantage: They made it easier for the inventor to concentrate on his work without aural distractions. "My deafness has not been handicap, but a help to me," he claimed.

5. Thomas Edison was not the sole inventor of the light bulb.

Electric lamps had been around since 1802. Warren De La Rue, a British inventor, created one of the earliest light bulbs in 1840. Yet the first bulbs were not commercially viable due to their brightness levels and short lifespans. (Expensive parts became another roadblock.)

On January 27, 1880, Edison was granted a patent for a cheap, long-lasting incandescent bulb that didn't require much electricity to function. He then worked with his employees to develop light switches, electric meters, and a power system capable of running the whole show.

Edison got his start in the telegraph industry. As a nod to the Morse Code system, he called his two eldest children — Marion Edison and Thomas Edison, Jr. — Dot and Dash, respectively.

Nikola Tesla disagreed. The Serbian-American engineer and inventor was hired by one of Edison's companies on June 8, 1884, and, unlike his boss, Tesla saw the potential in AC. After parting ways with Edison, Tesla sold patents that relied on alternating current to industrialist George Westinghouse.

Tesla's association with Westinghouse—and the eventual dominance of AC power — caused a rift between the two inventors, but historians say they weren't the bitter rivals pop culture makes them out to be. Edison once offered Tesla a temporary workspace when the latter lost his lab to a fire in 1895. And at a lecture given to the American Institute of Electrical Engineers, Tesla made sure Edison received a standing ovation.

Capable of recording sounds and playing them back, the phonograph was one of Edison's great achievements. His experiments with chatting toys were a lot less successful.

After the phonograph debuted, Edison began developing talking dolls with tiny phonographs in their bodies that played familiar nursery rhymes and songs. He hired actresses to recite "Twinkle, Twinkle Little Star" and other tunes for the dolls to "speak." But critics complained that they couldn't understand what the (rather expensive) playthings were saying and Edison sold just 500 dolls in total.

9. Thomas Edison made one of the world's first cat videos.

The Black Maria, also called "the Dog House," was the first movie studio ever constructed. Built in 1893 at Edison's laboratories in West Orange, New Jersey, it produced a series of short films for the public —including an Annie Oakley sharpshooting demonstration, the oldest known footage of Native Americans, and a mini-movie about boxing cats. After years of experimentation, Edison patented a movie camera called the Kinetograph in 1897. It was just one of the many cinema-related patents he obtained.

Dissatisfied with some college grads he'd hired over the years, Edison created a rigorous job interview test in the 1920s. Applicants had to answer dozens of questions about everything from Italian operas ("Who composed 'Il Trovatore'?") to astronomy ("What is the distance between the Earth and the sun?") to presidential trivia ("Where was Lincoln born?"). The pop quiz tended to stress people out. One job candidate later told The New York Times that "only a walking encyclopedia" could pass it.

11. A museum claims to own Thomas Edison's dying breath.

Located in Dearborn, Michigan, the Henry Ford Museum houses a test tube that's rumored to contain Thomas Edison's last breath. Edison was a longtime friend of Henry Ford, who's best remembered for his Model Ts and assembly lines (and antisemitism). According to legend, when Edison died, one of his sons trapped the inventor's terminal breath in a test tube, sealed it, and sent the macabre memento to Ford.

Truthfully, it was one of many test tubes that were present in the bedroom where Thomas Edison expired on October 18, 1931. Ford was given the object as something to commemorate their friendship.