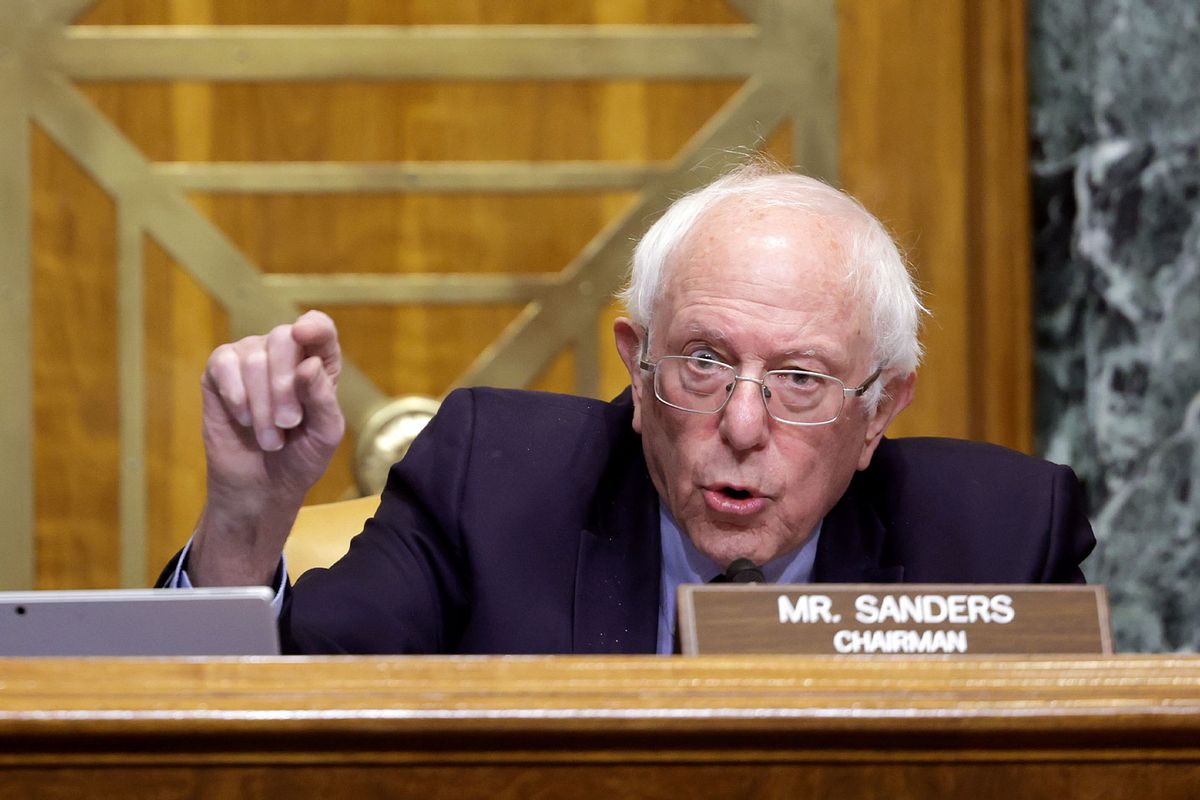 U.S. Senate Budget Committee Chair Bernie Sanders announced Friday that next week he will hold a hearing to expose how corporate profiteering in the midst of multiple global crises is driving inflation.

The event — entitled "Corporate Profits Are Soaring as Prices Rise: Are Corporate Greed and Profiteering Fueling Inflation?" — is scheduled for April 5 at 11:00 am ET and will follow his introduction last week of the Ending Corporate Greed Act.

"We cannot continue to allow large, profitable corporations to use the war in Ukraine, the Covid-19 pandemic, and the specter of inflation to make outrageous profits by price gouging Americans in every sector of our economy," he added. "It's time we discuss how corporate greed and profiteering are fueling inflation."

As "Common Dreams" reported Thursday, domestic corporate profits adjusted for inventory valuation and capital consumption hit $2.8 trillion last year, up from $2.2 trillion in 2020, according to the Commerce Department's Bureau of Economic Analysis (BEA).

"CEOs can't stop bragging on corporate earnings calls about jacking up prices on consumers to keep their profits soaring," Lindsay Owens, executive director at the Groundwork Collaborative, said in a statement about the analysis. "These megacorporations are cashing in and getting richer — and consumers are paying the price."

Owens is one of three experts set to testify at the Senate Budget Committee's Tuesday hearing. She will be joined by Robert Reich, a public policy professor at the University of California, Berkley who served as U.S. labor secretary during the Clinton administration, and Michael Faulkender, a finance professor at the University of Maryland who served as assistant secretary for economic policy at the Treasury Department under former President Donald Trump.

Both Reich and leaders from the Groundwork Collaborative, a progressive nonprofit, have praised recent proposals by Congress to curb corporate profiteering — which 82% of U.S. voters believe is fueling inflation, according to polling from last month.

Praising the Ending Corporate Greed Act — which Sanders unveiled with Sen. Ed Markey, D-Mass., and Rep. Jamaal Bowman, D-N.Y., — Rakeen Mabud, Groundwork Collaborative's chief economist and managing director of policy and research, said that "families, workers, and consumers expect their government to stand up against the kind of corporate abuses we're seeing today and Sen. Sanders' bill does exactly that."

If made into law, as "Common Dreams" reported, the proposal would impose a 95% tax on a company's profits that top its average profit level for 2015-19, adjusted for inflation. It would only impact companies with $500 million or more in annual revenue and be limited to 75% of income per year.

"A windfall corporate profits tax is badly needed to put the brakes on corporate profiteering that has run rampant over the course of the pandemic," said Mabud. "And now, the war in Ukraine is providing yet another opportunity for multinational energy giants and oil executives to drive up profit margins—while forcing families to pay more at the pump and on their energy bills."

Sanders' office estimates that the legislation, which is inspired by previous wartime measures, "would raise $31.9 billion from three of the top oil companies alone" in a single year, referring to Chevron, ExxonMobil, and ConocoPhillips.

The senator said last week that "the time has come for Congress to work for working families and demand that large, profitable corporations make a little bit less money and pay their fair share of taxes."