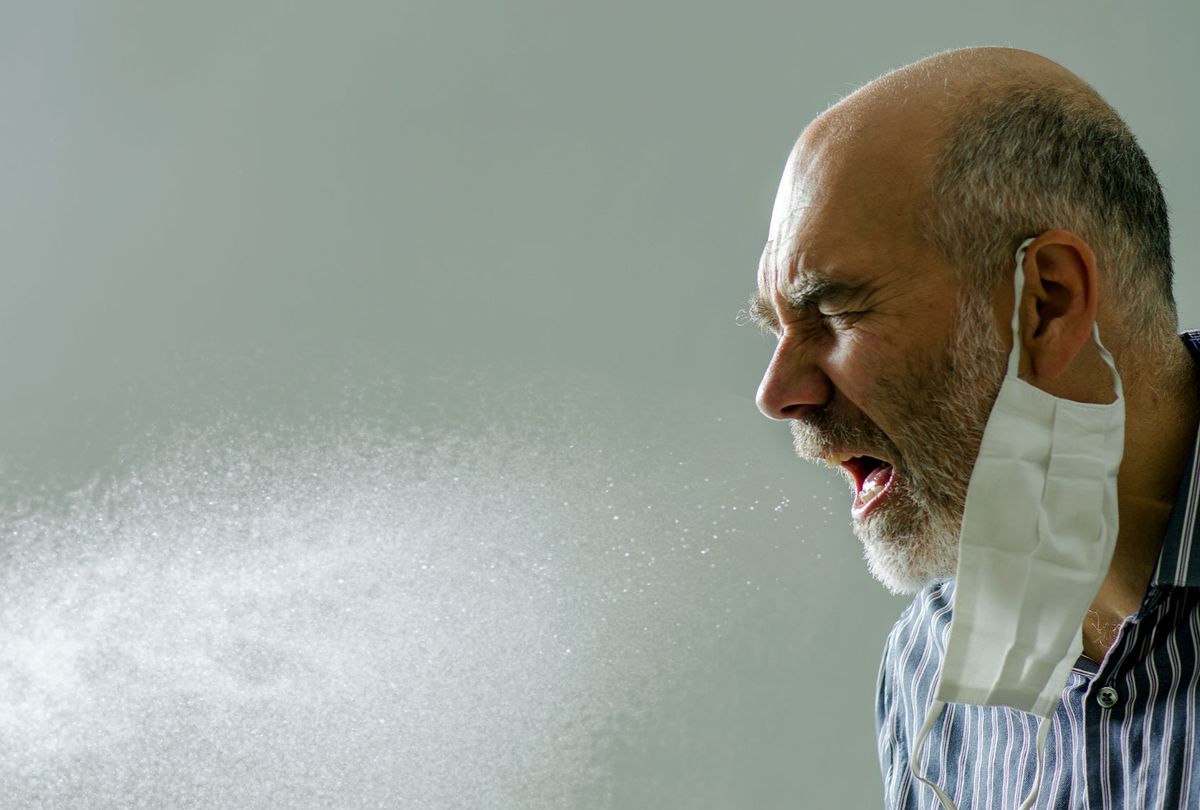 Man sneezing with spray of water droplet full of virus or microbes. He wears his face mask inappropriately on one ear. (Getty Images/Marc Dufresne)
--

Since the dawn of the pandemic, it's been one of the most glaring missing puzzle pieces in the scientific portrait of COVID-19: Just how much virus does one need to be exposed to in order to get infected?

Until now. A new study using an uncommon testing technique suggests it only takes a mere droplet — one 10 microns across, or one-hundredth of one millimeter — to infect someone with COVID-19. Droplets of this diameter are commonly expelled in a single cough or sneeze. The study was published Thursday in the journal Nature Medicine.

Though small, the study is particularly significant because it was a human challenge trial — meaning that human subjects were actually deliberately infected with COVID-19. Usually, these types of studies are controversial, particularly with viruses with higher mortality rates like COVID-19, but the results are immensely valuable.

The study began in March 2021 with 36 volunteers who were between the ages of 18 and 30 who had no evidence of a previous infection and weren't vaccinated.

"People in this age group are believed to be major drivers of the pandemic and these studies, which are representative of mild infection, allow detailed investigation of the factors responsible for infection and pandemic spread," said Chief Investigator Christopher Chiu, from the Department of Infectious Disease and the Institute of Infection at Imperial College London.

All of the volunteers were screened for any risk factors for severe COVID-19, such as having any blood, heart, liver or kidney issues. The study was also conducted in phases to further minimize the risk — for example, the first 10 people to get intentionally infected with COVID-19 received the antiviral drug remdesivir to reduce their chances of progressing to severe disease. Researchers in charge of the study also had monoclonal antibodies on hand in case anyone's infection progressed in a concerning way; ultimately, nobody had to receive the antibodies.

Notably, scientists observed that an infection developed within two days of first exposure, suggesting that COVID-19 has a short incubation period. The researchers also confirmed that people shed high amounts of virus before they show symptoms, adding to the difficulty in stopping the spread of infection before a person shows symptoms.

Out of the 36 participants, 18 people were infected with COVID-19 after scientists exposed everyone with a small drop of fluid containing the first detected strain of SARS-CoV-2 through a tube inserted into their nose. Two of those infected never experienced symptoms, while 83 percent of those infected lost some of their taste and smell. Nine subjects couldn't smell at all. Six months after the study, one infected participant still had an altered sense of smell. Notably, there was no evidence of pulmonary disease in those who were infected.

The researchers noted there appeared not to be a correlation between viral load and severity.

"No quantitative correlation was noted between VL [viral load] and symptoms, with high VLs present even in asymptomatic infection," the researchers stated.

"Particularly around the short incubation period of the virus, extremely high viral shedding from the nose, as well as the utility of lateral flow tests, with potential implications for public health," Chiu said.

Next, researchers are hoping to do another challenge study with subjects who are vaccinated against the delta variant.