We saw this coming: For Russia's neighbors, Putin's brutal invasion came as no surprise

For Lithuanians like me, raised on Russian propaganda, all of this was expected. The West didn't want to listen 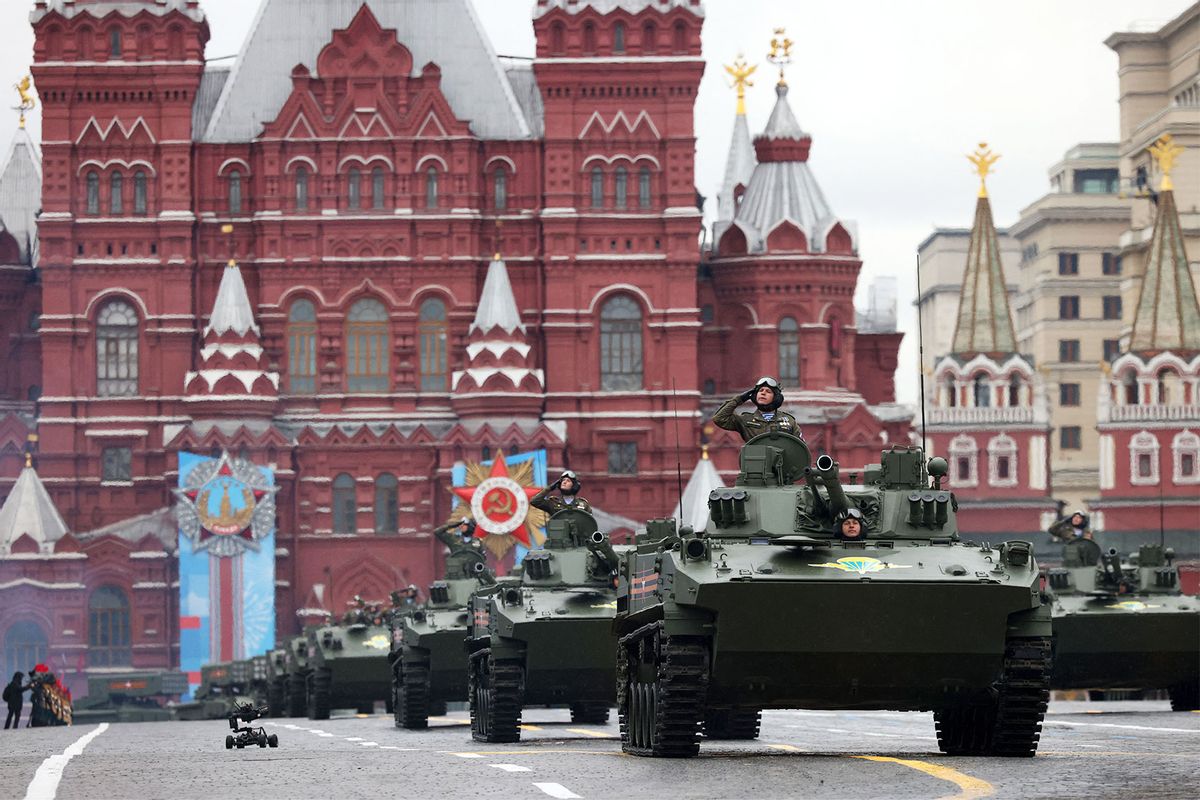 Russian military vehicles move through Red Square during the Victory Day military parade in Moscow on May 9, 2021. - Russia celebrates the 76th anniversary of the victory over Nazi Germany during World War II. (DIMITAR DILKOFF/AFP via Getty Images)
--

For Lithuanians or Poles, Russia's invasion of Ukraine did not come as a shock. It was always plausible — for more than a decade, Russia has rehearsed attacks on its neighbors during military exercises, going as far as a simulated "cut-off" of the Baltic states from the EU or simulated nuclear strikes on Warsaw or Berlin. As I write, children are dying, Ukrainian women and girls are being raped by Russian soldiers, civilians are shot in the back; schools, hospitals and UNESCO-protected cathedrals are being carpet-bombed. The death and deportation lists for thousands of Ukrainians have reportedly been drawn up, just as they were under Stalin and Hitler.

We in Lithuania always knew that Russia might be capable of this. We had a taste of a "light" version in 1991, with "only" 14 people killed and about a thousand injured. We constantly tried to forewarn our partners — but for the most part, they thought it was an exaggeration, an example of Russophobia. No, it was simply our fluency in their language; it was expertise and Russo-realism.

Why are so few willing to listen to this expertise? Even now, priority is given to those few Russian intellectuals who beg us not to equate all Russians with Vladimir Putin, asking us to remember Russia's contributions to world culture. I hear their cries of despair, but how are they constructive or relevant now? We already know, from the insights of Alphonse de Custine to André Gide to Orlando Figes, that throughout the ages the main preoccupation of Russian intellectuals has been "What will the world think about us? Won't the greatness of our cultural façade be diminished?" — and never mind the massacre of Ukrainian innocents. There are also the voices of some Western commentators, both on the left and right, arguing for "understanding" that the current Russian aggression may be a "natural" reaction to NATO expansion in 1997 and afterward.

RELATED: Putin's endgame: Will it be stalemate, nuclear war — or regime change in Moscow?

I feel that a cultural translation is required, as the Russian intellectuals cannot be impartial and the Western critics often lack basic comprehension of Russian culture and language.

The latter, arguing that what is happening now is Russia's reaction to NATO expansion, are in fact supporting Putin's mindset: There is no rule of law, no democracy and no national sovereignty; no results of national referendums are valid; the world is just a cake to be sliced by those who happen to hold a knife.

Those who argue that what is happening now is Russia's reaction to NATO expansion are supporting Putin's mindset: There is no rule of law, no democracy, no national sovereignty.

Let us be clear: Membership in NATO was not something "given" to the new members. We earned it by working extremely hard and making progress (which took the old member states decades) in a very short time to qualify for NATO and EU entry requirements.

We have succeeded, while Ukraine is now being punished with crimes against humanity for even contemplating a wish to live as part of European civilization. Make no mistake: The battle for our civilization's values is now being fought on Ukrainian soil, and paid for with the blood of Ukrainians.

The main mistake made by Western countries was to accept the illusion that Russia is a part of European civilization. This reflects Russia's capability to look like a simulacrum of European culture and to imitate its aesthetic shell while retaining an entirely different content, often opposite to Western values.

The Russian state has historically never had a politically pluralist society nor any meaningful degree of self-governance, not even on a low level, such as municipal or academic autonomy. It has always been a pyramid of power, enforced with violence, subjugating its people into blind obedience. Even the notion of time in the Russian culture is different to the Western conception. It is cyclical, not linear: Russians perceive that history is bound to repeat itself; it is predestined, and does not depend on individual human actions. In this context, the human being is perceived as a tool, capable only of suffering; Russian culture has always glorified passive suffering (not proactive acts of kindness) as the warranty of "spirituality." Individuality and initiative were always persecuted, because "vsiakaya vlast' — ot Boga." ("All worldly authority is from God.") This dogma, coined by Peter I, which puts secular power above religious power, still applies, as confirmed by recent events.

Hence we have Russian leaders' delirium about "restoring" the Soviet empire, recreating Moscow as the "Third Rome" and imagining that they still live in the 1939 of the Molotov-Ribbentrop pact, dividing "zones of influence" to dominate the world. They are attempting to revisit or reinvent the imaginary cycle before the fall of the Berlin Wall — or even, if we are to believe recent Russian statements, to "liberate Eurasia" from Portugal to Vladivostok.

For decades now, Russian media has been feeding its public a stream of propaganda about their major enemy, the "rotten West" (that's you and me) and the "aggressive Natovtsy" (i.e., NATO). The narrative repeated on a daily basis in Russia is about failing Western societies, full of fascists and "perverts," largely meaning gays and lesbians. (They have even coined the Russian neologisms "Gayrope" for Europe and "Liberasty," as in "pederasty," to describe liberal democracy.)

According to Russian propaganda, the nation's mission is to "liberate" Europe. We saw this all already with the "liberation" of the Baltic countries during World War II.  Millions of German women and girls were "liberated" by Russians in 1945, raped on their own soil. Then there were the Russian tanks in Budapest in 1956, and in Prague in 1968, to "liberate" the Hungarians and Czechs from themselves. The Russians, you see, never invade: They come to "liberate" us from our own worst impulses. They always say they are "helping a brotherly nation" or "protecting" the Russian-speaking locals. We, in Lithuania, heard that throughout the 20th century. Ukrainians can confirm that nothing in Russian rhetoric changes. Nothing, unfortunately, but the extent of aggression, cynicism and death.

Current public opinion polls show that this view of "aggressive" NATO, the "rotten West" and the need to "liberate" Ukraine is supported by approximately 70% of Russian citizens. Actively or passively, they are enabling what is happening. That is why we have not seen millions protesting — only a few  thousand in minuscule protests that are easily crushed. Russian mothers are still silent – they are not out on the streets protesting their sons being sent to kill Ukrainian children and women. Instead, many of them are reportedly texting "shopping lists" to their marauding sons.

I had the Soviet school experience myself. I remember the textbooks written to brainwash generations into becoming cannon fodder for the fight with the rotten, capitalist West.

Not every Russian reads the classic works that we are constantly asked to remember — and let us also remember that almost any Russian author who wrote anything of real worth, from Tolstoy to Brodsky, was persecuted by the state in one way or another — but all of them are subject to the school curriculum. I had the Soviet school experience myself, and remember the content of the textbooks written to brainwash generations into becoming uncritical cannon fodder for the fight with the rotten, capitalist West. Generations of Russian children were (and still are) taught the example of Young Pioneer Pavlik Morozov: It is commendable to betray your parents if their political views are incorrect. Those in the West who go on and on about the need to support Russian society with "democratic change" or a "new Marshall plan" do not understand one crucial fact: There is no critical mass in Russian society who want to implement it. It is impossible to import democracy if 70% of Russians see it as an evil from the West.

As their neighbors, we know the Russian mentality and our advice is simple: Be fearless. Each Western appeasement toward Russia, each silence, each closing of the eyes is treated as a sign of weakness, and Russians never respect weakness. They are not pragmatic and do not mind self-inflicted wounds if they believe there is a higher goal. It is naïve to think that Russian society will sort out the mess it now finds itself in — there is no will, skill or tradition for that. Historically, all changes of power in Russia have been  implemented by the military, not by civil society. If internal regime change should occur for some reason, it may not be for the better.

What is required now is to be one step (or, even better, two steps) ahead of this adversary, and to stop laying our cards on the table. Stop making public announcements about what will or will not be done in dealing with Russia. What is required is to act, and not just to react by dancing to the Russian tune and the rhythm set by Russian threats. Enough with drawing imaginary "red lines" — it's time to reinforce impenetrable firewalls. That does not mean boarding up the doors. It means that someone can come through the door only when invited, and on the host's terms — not to "liberate" you, not to "demilitarize" you, not to "restore order" in your own home. There is a meme circulating in Russian in response to the famous statement about Russia's "limitless borders" — in fact they have limits, where Russia gets its ass kicked.

Let us do everything to help Ukraine win: On Ukraine's land and with Ukrainian blood, the battle for Western civilization is now being fought.  We have to stop seeing the Ukrainians as gladiators in this media circus of death. In fact, they are the world's vanguard. If they lose, we all lose, and Western democracies, which have invited in too many Russian Trojan horses through finance, politics and trade, stand to lose the most.

Read more on Putin, Russia and the war in Ukraine:

Kristina Sabaliauskaitė is a Lithuanian writer and art historian. She won the Polish-Lithuanian Award of Two Nations and was Author of the Day at the London Book Fair of 2018. Her novel "Peter’s Empress," about the Lithuanian Marta Skowronska, who became Catherine I, wife of Peter the Great — is an international bestseller.