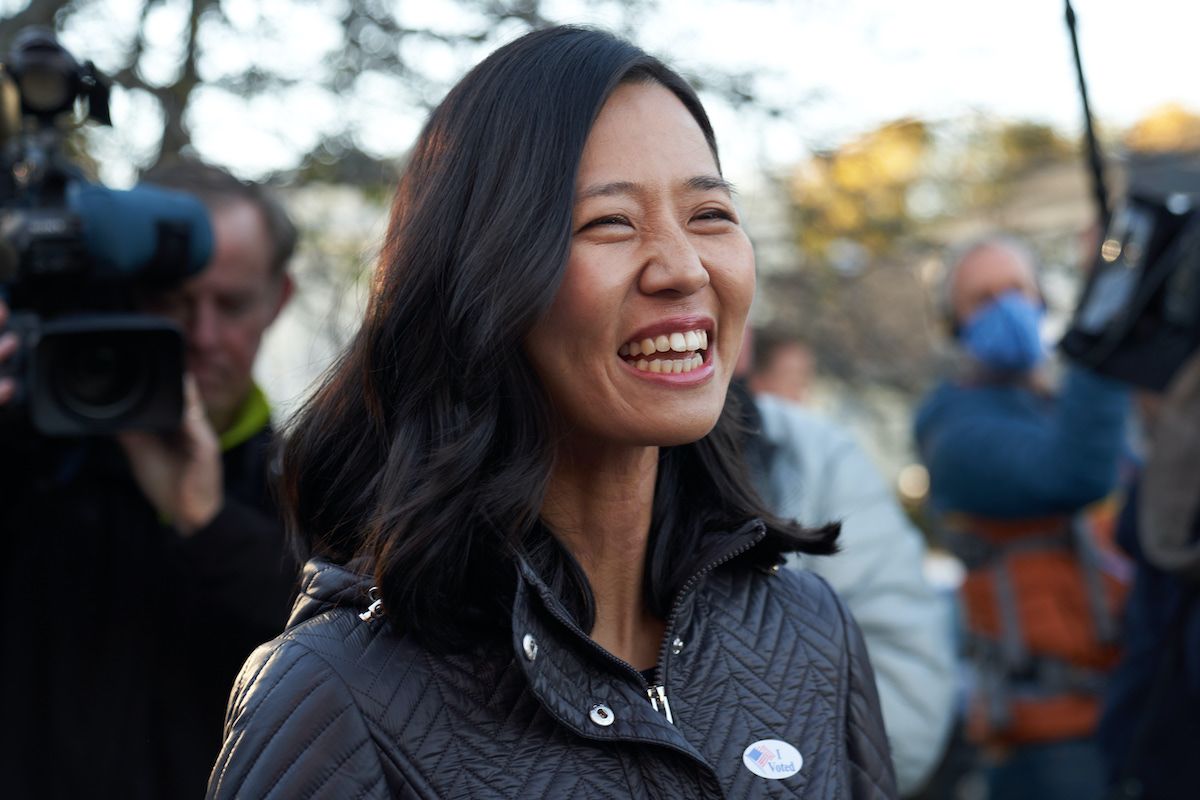 On a raw, 24-degree February morning, Boston Mayor Michelle Wu is waxing philosophical about food and farming. Standing in front of a shivering who's-who of Boston's urban agriculture, food access, and economic development communities at the Fowler Clark Epstein Farm in the historically Black Mattapan neighborhood, Wu is announcing the formation of two new city offices — the Office of Food Justice and the GrowBoston: Office of Urban Agriculture — to tackle food access and production, respectively.

In a multicultural, nearly 400-year-old city with a massive economic gulf between the city's wealthiest and poorest residents, the two offices will oversee what is arguably the most ambitious food policy agenda Boston has ever seen and one that could serve an example for other cities nationwide.

When a reporter asks Wu what this day means to her personally, she launches into an heartfelt recollection. As a child, she says, her Taiwanese American family drove an hour every week to the grocery store "that had the vegetables and spices that my parents felt were home." Then she reflects on the bureaucratic hurdles of opening a small tea shop in Chicago in her early 20s after graduating from Harvard, an experience that would inform and inspire her later work to clear some of those barriers in Boston as a City Hall staffer and then as an at-large city councilor.

"Food is so intrinsically part of our identities, our cultures, and our humanity," she tells the crowd, "and the chance that Boston has to keep building the movement that has been growing here is incredible."

Other Boston mayors have cared about food and farms, of course, but Michelle Wu is a former small restaurant owner whose experience navigating tricky licensing landscape in Chicago inspired, in part, her entry into law school (she is the first lawyer to serve as Boston's mayor since 1984) and government service after that.

Food justice advocates laud the access they had to Wu when she was a city councilor and praise her depth of knowledge on the issues. She is Boston's first mayor who is also a mother, and she knows how to feed a family, advocates say. But will a perfect storm of challenges in Boston — including a high-profile search for the city's seventh schools superintendent in 15 years and the ongoing recovery from the pandemic — put food justice on the back burner in New England's largest city?

A foundation of food, family

By all accounts, Michelle Wu's deep appreciation for food — and the power it has as a cultural force — runs deep. After eating her parents' home-cooked Taiwanese food growing up, she moved east from Chicago in 2003 to attend Harvard and quickly landed a job at the prestigious Boston Consulting Group after graduation. But when her younger sisters called with the news that their mother, Yu-Min, was exhibiting signs of a mental health crisis, Wu and her then-boyfriend, Conor Pewarski, moved back to Chicago to care for her.

And instead of jumping into Chicago's corporate world, as she had in Boston, Wu took her savings and opened Loose Leaf Tea Loft — a tea shop she imagined Yu-Min taking over as a retirement project when she was well enough. But red tape with the city delayed the shop's opening several times, forcing Wu to "go beg our local alderman for assistance," Wu told the Boston Globe in 2021. Once the shop opened, everyone helped keep it going, with Wu making dumplings and cookies and her sisters tasting the teas that they would serve. The space, a former antique shop, became the site of poetry readings, entrepreneurship courses, and open mic nights.

"I loved it. Once we actually got it open, it was beautiful," Wu told the Globe. "It really felt like creating a space that was welcoming people into our home. We were able to find and become part of the local arts scene."

The energy in the shop brought a needed distraction from her mother's worsening mental health condition. Wu and her family were coming to grips with the reality that Yu-Min would never be well enough to take over the shop, so they sold it and moved her mother, sisters, and Conor (whom she married in 2011), to Boston in 2010. At 23, Wu became her sister Tori's legal guardian and entered Harvard Law School, where she studied under and befriended Elizabeth Warren, now a Massachusetts senator.

Wu went to work as a law fellow in former Mayor Thomas Menino's administration developing more streamlined processes for food trucks and restaurants to get their businesses up and running — work that was fueled directly by her own experience.

As a city councilor at large representing every resident of Boston from 2013 until 2021, Wu continue her work to cut red tape at City Hall to help small businesses. She co-wrote the city's first BYOB legislation for restaurants, and filed legislation to limit the rights of chain stores and restaurants in Boston's neighborhoods. Wu sponsoredBoston's Good Food Purchasing Program (GFFP) — which passed in 2019 but hasn't been implemented yet — requiring large public food purchasers (including Boston Public Schools) to give preference to regional producers who use sustainable practices, protect the livelihoods of farmers and workers, treat animals humanely, and promote health and well-being in their foods.

After announcing her candidacy for mayor in 2020, Wu released a massive, 66-page "Food Justice Agenda for a Resilient Boston," the result of years of listening and responding to community needs around nutrition, land use, and economic development.

Beyond signing her name to food-related policies, Wu has ardently educated herself about Boston's food justice and urban agriculture landscape and supported its growth, advocates say. As a young city hall staffer, she shadowed a dietician in charge of food access programming at Boston Medical Center and, in the early days of the pandemic, helped connect an Eastie Farm food distribution program with unreached families in need.

"We're thrilled for Mayor Wu to be in this position," says Erin McAleer, executive director of Project Bread, a nonprofit that addresses food insecurity in Massachusetts and worked with Wu while she was a city councilor to increase awareness of the Supplemental Nutrition Assistance Program, or SNAP, among Boston residents. "She understands food insecurity as a systemic issue, not an individual failing," said McAleer. "She recognizes the power of policy change, but she also recognizes the importance of community-informed solutions."

Besides marketing SNAP benefits to more low-income Bostonians, McAleer said the Wu administration has the opportunity to address food insecurity by addressing the economic foundations of hunger: the rising cost of housing and childcare, and the widening wealth gap between the city's richest and poorest residents, among others.

The announcement of the city's new food and farm offices within the first 100 days of Wu's administration was intentional, aides say, signaling the importance of expanding access to local, nutritious food — and to the urban soil to grow it — as a policy priority. But the fact that the event took place just under the wire, on the 100th day — also signals the fact that Wu has a lot on her plate.

The pandemic hit Boston's immigrant, low-income, and essential worker communities particularly hard, resulting in lost wages and an inability to put food on the table. Community leaders say the pandemic created an acute economic and food access crisis, but also shined a light on inequities that have been present in under-resourced Boston communities for decades.

Before former Mayor Marty Walsh left office early to join the Biden administration as Secretary of Labor, the city set up the Boston Resiliency Fund in 2020 to coordinate assistance for those who were most affected by the pandemic, an initiative "that allowed so many [food access] initiatives to either scale or to take off," McAleer says. Walsh's Office of Food Access, which was the Office of Food Initiatives under his mayoral predecessor Thomas Menino, played a vital role connecting food insecure Boston families with their most basic need.

Read more Civil Eats: A New California Law Will Create a Lot More Compost — but Will it Make it to Farmland?

Wu's agenda is designed to go beyond access to pursue food justice, which she says includes community control of land for their own food; dismantling systems that oppress food chain workers and elevate white supremacy; and creating real economic opportunity for all Bostonians, especially those in BIPOC communities, to create food businesses and build assets and wealth.

She's restructuring City Hall names and departments to reflect that change. In her February announcement, Wu said the Office of Food Justice, now housed within the Environment, Energy, and Open Space Cabinet, will "bring together all the ways in which food security, economic development, and climate justice are deeply intertwined." The office will work in concert with the new Office of Urban Agriculture — Boston's first office focused on food production — which will coordinate urban farms, food forests, and gardens and permanently convert unused city-owned land into food oases.

One of the principal objectives of Wu's new Office of Food Justice is to begin implementing the Good Food Purchasing Program, which Wu championed as a City Councilor. She sees a future where not just school children are eating local, sustainably and humanely produced food from Black-owned farms and businesses across the region, but patients, city workers, and college students, too.

As a candidate for mayor, Wu laid out a plan to get Boston's 11 hospitals (which spend an estimated $18.2 million per year on food), 31 colleges and universities (and their collective meal budget of $34 million), and other anchor institutions to commit to the six good food purchasing standards. It can do so through the convening of an "anchor council" wherein institutions will set goals together and leverage their collective purchasing power, according to Wu's food justice plan.

"Imagine if each one of our hospitals and universities serving their faculty, patients, and students joined together with the City of Boston to think about how we can source, collectively, the healthiest, farm-produced Massachusetts apples, the jobs right here in Mattapan to help produce that produce," Wu said in her announcement of the new offices. "We know that it's possible, and that food is a way to touch and intertwine each one of our collective futures."

Such an ambitious food justice agenda will not be easy to fulfill. Wu's feuds with several public safety unions over a requirement that city workers be vaccinated and boosted against COVID-19 took some wind out of her policy sails in the early months of her term. And the resignation of embattled Boston Public Schools Superintendent Brenda Cassellius in January leaves Wu with the unenviable task of hiring the city's seventh head of schools in the past 15 years.

Still, there is a palpable optimism among the food justice community toward the new administration.

The immediacy of the climate crisis is both what got Kannan Thiruvengadam into urban agriculture and what attracted him to then-candidate Wu. Thiruvengadam directs Eastie Farm in the city's East Boston neighborhood, a multisite urban farm that is also a food distribution and youth training center. Speaking to a crowd of his food justice friends and colleagues at the February press conference, he pauses to collect himself.

"I feel like we're at a good time here in the city because the people who 'get it' are also in the position to make it happen," he said. "I get a little emotional because I've been waiting for something like this, and it's happening."

For Tufts' Agyeman, Wu's success will be wrapped up in an approach that harnesses the full power of city government alongside a collection of veteran food justice and urban agriculture groups who are ready for a change.

"Boston has an incredible group of community-based organizations — I mean, really world-class — and the enthusiasm that you're seeing [about Wu] is a recognition that she has spelled out not just a government agenda but an all-hands-on-deck agenda," Agyeman said. "This is an inclusive agenda, this is a visionary agenda, and this is an achievable agenda over the medium term."