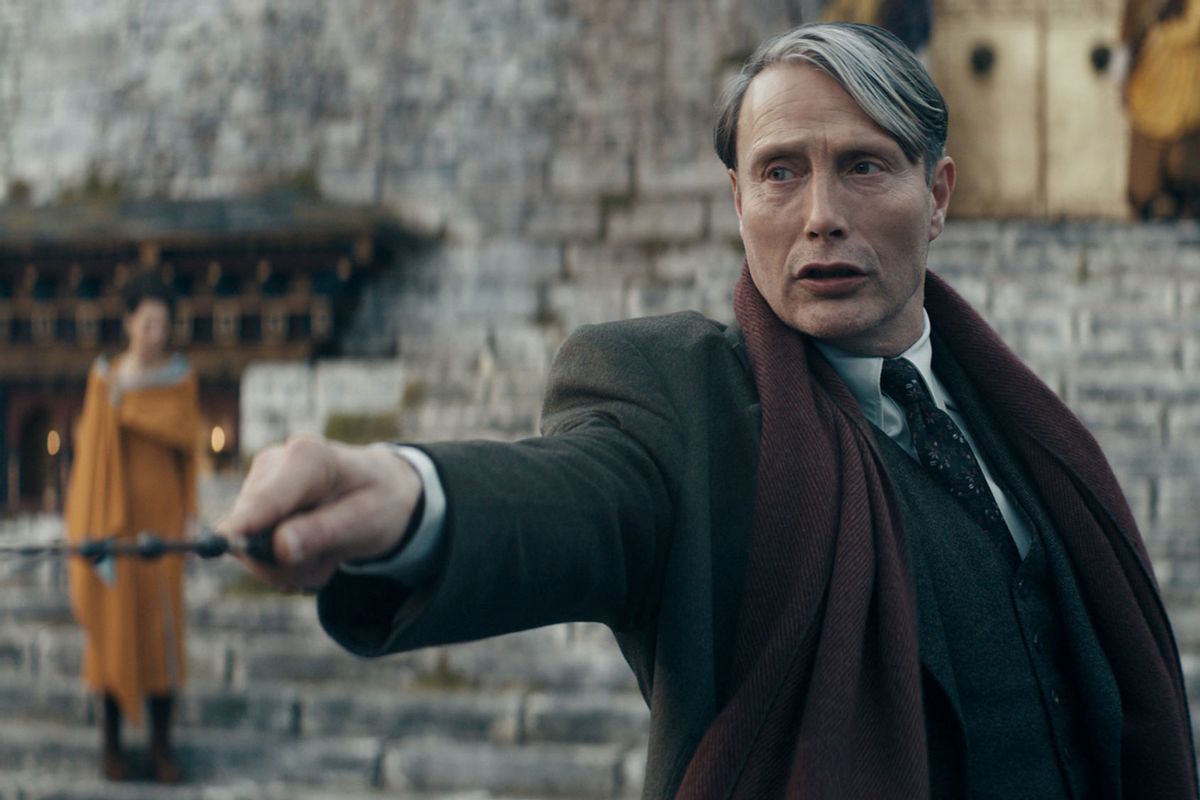 Before we get to today's news about the latest "Fantastic Beasts" movie, "The Secrets of Dumbledore," let's recap all the scandals this franchise has endured in recent years:

At this point, "Fantastic Beasts" may be the most scandal-prone movie series in history. I mean, what else could even happen?

Dumbledore and Grindelwald were "in love" . . . but not in the Chinese version of the movie

So the new movie is called "The Secrets of Dumbledore." What secrets are we talking about? Well, one of the big ones is that Dumbledore, the elderly wizard from the "Harry Potter" movies played in these prequel films as a younger man by Jude Law, used to be in a romantic relationship with main villain Gellert Grindelwald. The two made a pact never to harm each other, which is why Dumblefore now has to fight his former lover (who's gotten seriously fascist-y in the years since they split up) through proxies like Newt Scamander (Eddie Redmayne).

Rowling hinted that Dumbledore and Grindelwald had a thing in the pages of her 2007 book "Harry Potter and the Deathly Hallows." She then famously confirmed that Dumbledore was gay in a 2009 press conference, but never explicitly said as much in the text of her future work. The silence went on for so long that fans eventually accused Rowling of wanting credit for including a queer character in her story without actually . . . y'know, having him be a queer character.

I think that's a reasonable criticism, particularly when these new movies are about a battle between Dumbledore and Grindelwald, whose youthful love affair plays a part in their conflict. But the silence makes a lot more sense when you consider that openly acknowledging Dumbledore's sexuality in the movies would risk losing the studio money, and they can't have that.

To its credit, "The Secrets of Dumbledore" actually does acknowledge that Dumbledore and Grindelwald were an item, with lines like "because I was in love with you" and "the summer Gellert and I fell in love." It's still not much, but better late than never. However, Variety reports that these lines have been removed from the movie in China, which has a reputation for censorship.

"As a studio, we're committed to safeguarding the integrity of every film we release, and that extends to circumstances that necessitate making nuanced cuts in order to respond sensitively to a variety of in-market factors," Warner Bros. said in a statement. "Our hope is to release our features worldwide as released by their creators but historically we have faced small edits made in local markets."

In the case of 'Fantastic Beasts: The Secrets of Dumbledore,' a six-second cut was requested and Warner Bros. accepted those changes to comply with local requirements but the spirit of the film remains intact. We want audiences everywhere in the world to see and enjoy this film, and it's important to us that Chinese audiences have the opportunity to experience it as well, even with these minor edits.

Man, that is a lot of words to say, "the Chinese government is homophobic and we are bowing to their censorious demands rather than lose money."

"Fantastic Beasts" has always been lame, is still lame

From the start, the "Fantastic Beasts" series has always seemed like a series in search of a reason to exist beyond money. Like, are you going to look me in the eye and say that we needed five movies about a couple of throwaway lines from the "Harry Potter" books? Even if the movies themselves weren't so milquetoast, I'd be raising an eyebrow.

This decision is in line with that. The series wants to be about the conflict between Dumbledore and Grindelwald, but it's consistently tip-toed around the nature of that conflict for fear of ticking off the wrong people and losing money. Then why even make it about that? Why include this angle at all if you don't have the guts to actually explore it? The whole thing is just . . . weak.

"Fantastic Beasts: The Secrets of Dumbledore" opens in theaters this weekend . . . I mean, unless all the prints of the film spontaneously burst into flame for no reason. That would fit the pattern.