"In the Pletzl of Paris, you get a glimpse of Jewish life left undisturbed by time" 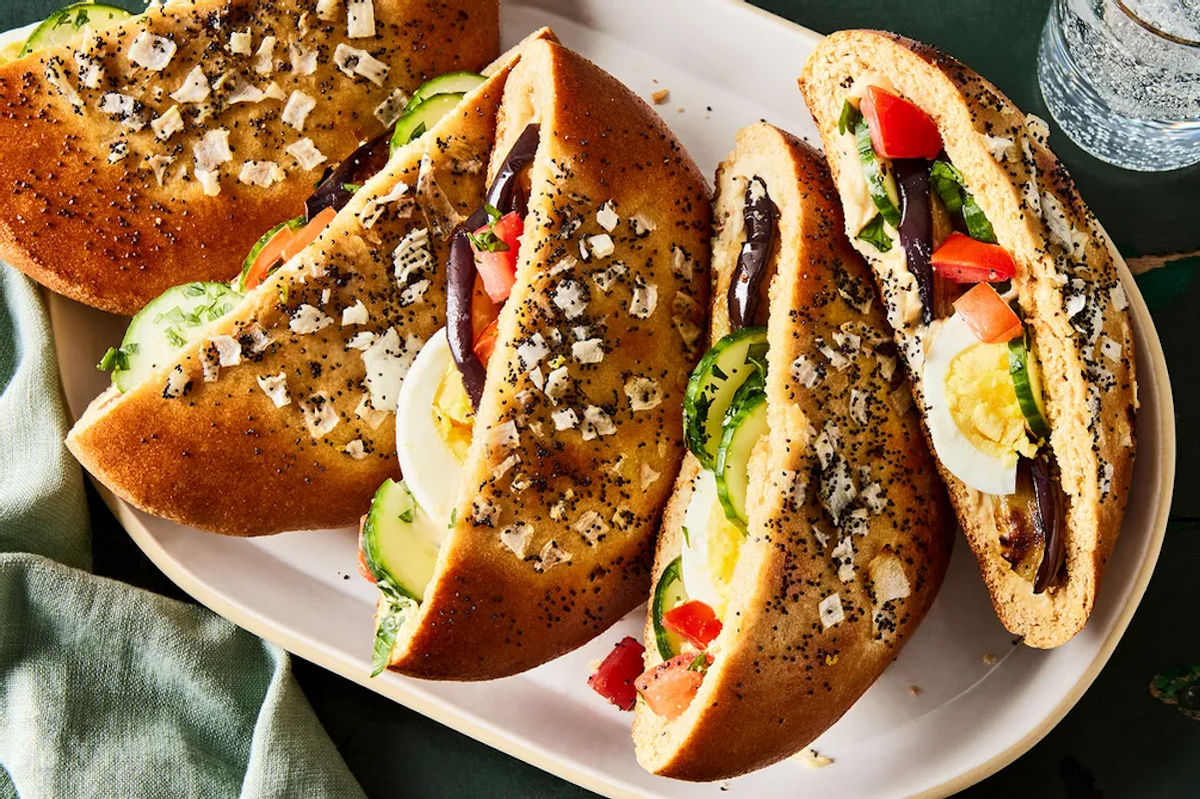 You don't hear much about the pletzel these days. On one hand, it's an Ashkenazi Jewish flatbread covered with raw onions and poppy seeds. On the other hand, it's a neighborhood in Paris.

The name comes from the Yiddish for "little square," as in a little area within a city. (Technically, the Yiddish spelling of the neighborhood is "פּלעצל," which transliterates to "pletzl." The flatbread, on the other hand, is more commonly spelled "pletzel.") The Pletzl in Paris sits in the Marais neighborhood of the Fourth Arrondissement. A nondescript plaque on the corner of Rue des Rosiers and the Rue Ferdinand Duval tells the story of Ashkenazi Jews rushing to Paris in the late 19th century, fleeing persecution primarily from pogroms throughout the Russian empire. Jewish immigrants continued to arrive in the city from Romania, Russia, and throughout the Austro-Hungarian empire.

I've traveled to places my Jewish ancestors came from, like northeastern Slovakia and northern Romania: Plaques are few and far between, and Jewish bakeries, butchers, and delis are mostly nonexistent. But in the Pletzl of Paris, you get a glimpse of Jewish life left undisturbed by time. Restaurant and bakery signs are covered in Hebrew characters and you can see the tzitzit, fringes worn predominantly by Orthodox Jewish men, swinging with the bounce in their step.

But I came to the Pletzl for one reason, and one reason alone: to visit Florence Kahn's bakery. I first heard of her bakery when I spotted her cookbook, "Yiddish Cuisine: Authentic and Delicious Jewish Recipes," on the shelves of my local bagel spot in Berlin, Fine Bagels. I was drawn to the book by her use of the word "Yiddish" front and center. "Yiddish" just means "Jewish" in the Yiddish language, but you don't usually see it on a book cover.

Kahn met me outside of her bakery on a brisk fall afternoon. I'd already been there earlier in the day for lunch. There was a line out the door, and the smattering of tables outside were full. An impossibly adorable elderly couple started singing to one another while standing behind me, as if they were in their own musical and the rest of us were just extras.

Shuffling inside, I panic-ordered the first thing I saw in front of me in broken French. Fortunately, what I saw was a sign promoting their "pletzel sandwich." As it turned out, this was like finding high-shelf whiskey at an open bar.

All the recipes are family recipes, Kahn told me when we sat down a few hours later. They come from her mother, her grandmother, and her ex-husband's family. "We don't change the ingredients," she said. "It's always the same."

Kahn said it was essential for her to open a Yiddish bakery in the neighborhood, but can't quite put her finger on why. But after thinking about it for a moment, she came up with an answer. "I noticed that survivors of the Shoa, their relatives and descendants, lost the taste of their childhood," she said. "I feel like I had this mission to bring that back for people." But it's not just about looking back. It's about preserving a culinary legacy for future generations. "It's everything," she said of Yiddish cuisine. "It's my life."

As family members who grew up eating these dishes pass away, Kahn worries that younger generations are losing classic Yiddish recipes. Her cookbook and her bakery are meant to preserve this culinary legacy so that it may continue to live.

But back to that pletzel — the sandwich, not the square. Traditionally, a pletzel is a simple flatbread with onions and poppy seeds. At Florence Kahn, it's a puffier, oniony sandwich bread filled with pastrami, turkey, or corned beef; topped with eggplant, caviar, red peppers, tomatoes, cucumbers, and pickles.

Food writer Arthur Schwartz called the historical pletzel "a tough bread," on an episode of "Joan Knows Best." "You need good teeth for pletzel." Of course, flatbreads are hardly unique to Ashkenazi Jewish cuisine, but Schwartz says it's the onions that make it a Jewish dish. "Onions were the main flavoring of Eastern European Jewish food," he said. "Because we didn't have much else." In the episode, Joan Nathan, a matriarch of contemporary Ashkenazi Jewish cooking, surmises that most people in 1930s New York City used leftover challah dough to make their pletzels.

When I thought of what to stuff inside my dream pletzel, my mind immediately went to sabich, the Israeli pita sandwich brought to the country by Iraqi Jews. Similar to a falafel wrap, sabich are stuffed with hummus, fried eggplant, a tomato-cucumber salad, and hard-boiled eggs, then topped with tahini, spicy zhug, and a tangy pickled-mango sauce called amba. To make my own pletzel-pita hybrid, I adapted my challah recipe with white whole-wheat flour, olive oil, and a bit of honey before stuffing and covering the dough with onions and poppy seeds. I also leaned toward Kahn's sandwich adaptation, making for a thick, chewier bread than the flatter variety. This is a sandwich that touches on Jewish culinary roots from Eastern Europe to the Middle East. It's a sandwich full of context, relying on simple ingredients and flavors. It's a sandwich that takes me back to a special little place, the Pletzl of Paris.