At least three people were killed and dozens were injured in Pittsburgh, Portland, and South Carolina 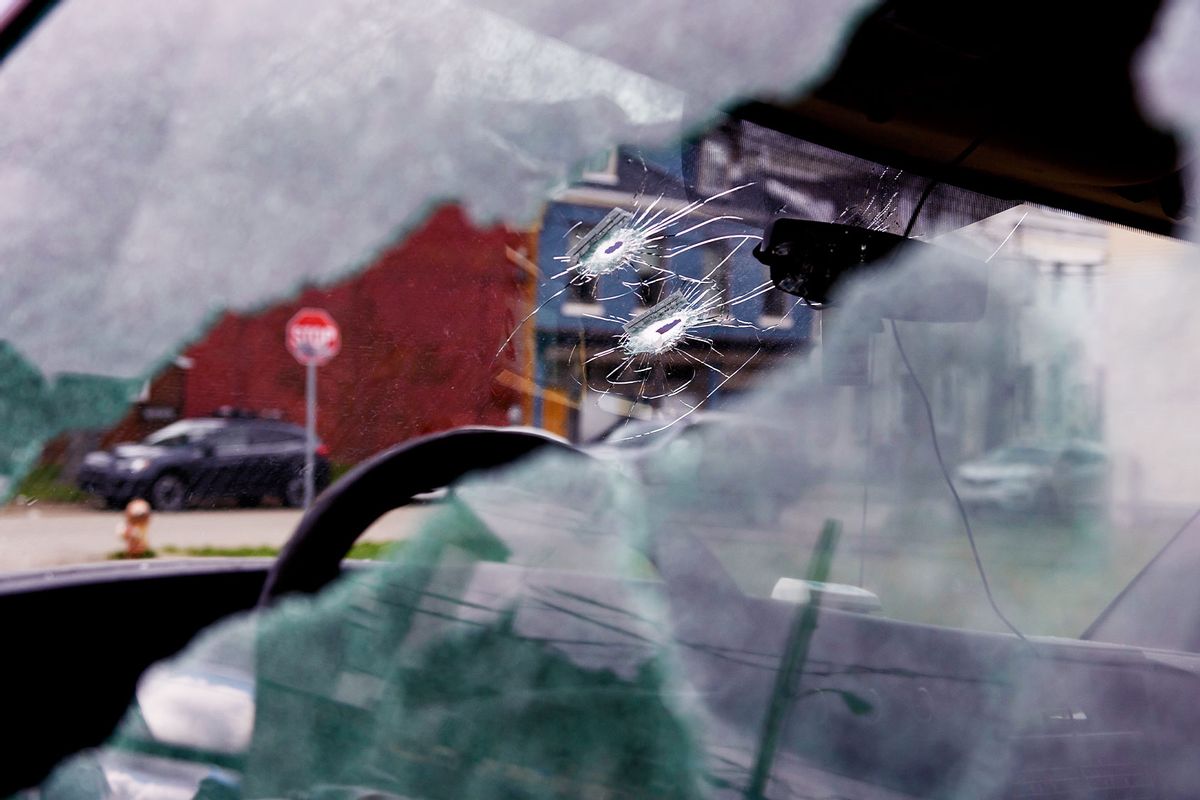 Bullet holes are seen in a van parked outside an Airbnb apartment rental along Suismon Street on April 17, 2022 in Pittsburgh, Pennsylvania. Last night, a shooting at a house party at the rental left two people dead and nine injured. (Jeff Swensen/Getty Images)
--

In Pittsburgh, at least two people were killed and eight were injured at a party on Sunday in the city's East Allegheny neighborhood. Around 200 people had attended the event, according to CNN, most of whom were underage. Both of those killed were 17-year-old males.

Police are still working to unpack why the shooting unfolded. It reportedly stemmed from an altercation that sparked between attendees around 12:30 a.m. Once gunshots were fired, the crowd reportedly fled the event, with some leaping jump out of windows, "sustaining injuries including broken bones and lacerations," according to NBC News. Police said that as many as 50 rounds were fired.

A similar act of mass violence broke out in South Carolina that same day, when at least nine people were injured after a gunman opened fire at Cara's Lounge, a restaurant in rural Hampton County.

According to an ABC affiliate, the shooting unfolded as a restaurant was hosting an Easter bash. "We were just in the club having a good time and shots just led out. It didn't happen inside the club," said a witness. "I think this is something someone had planned because shots rang out from the back of the club."

The rampage came while the Palmetto State was still reeling from an even larger shooting in Columbia on Saturday, when a man opened fire on over a dozen people at the Columbiana Centre mall. At least nine people sustained gunshot wounds, with five others having sustained separate wounds while fleeing the site.

22-year-old Jewayne Price has since been arrested in connection with the shooting on suspicion of illegally possessing a pistol, according to an NBC affiliate.

Price, who has not yet been formally charged, is under house arrest and was ordered to wear an ankle monitor. His lawyer has argued that he was acting in self-defense against other shooters at the mall. It still remains unclear how many shooters there were at the Columbiana Centre.

A day later, in Portland, Oregon, one man died and three minors were injured after a shooting unfolded in the city's southeast Centennial neighborhood, an ABC affiliate reported.

Portland Police said that the massacre was part of a drive-by shooting at a gas station, where four teenage boys were standing together when a motorist pulled out a gun and shot at them.

Last week, the White House announced plans to crack down on "ghost guns," unserialized and untraceable guns that can be delivered via mail and assembled at one's own home. They can also be obtained with no background check.

"These guns are weapons of choice for many criminals," Biden said last week. "We're going to do everything we can to deprive them of that choice and when we find them, put them in jail for a long, long time … If you commit a crime with a ghost gun, expect federal prosecution."