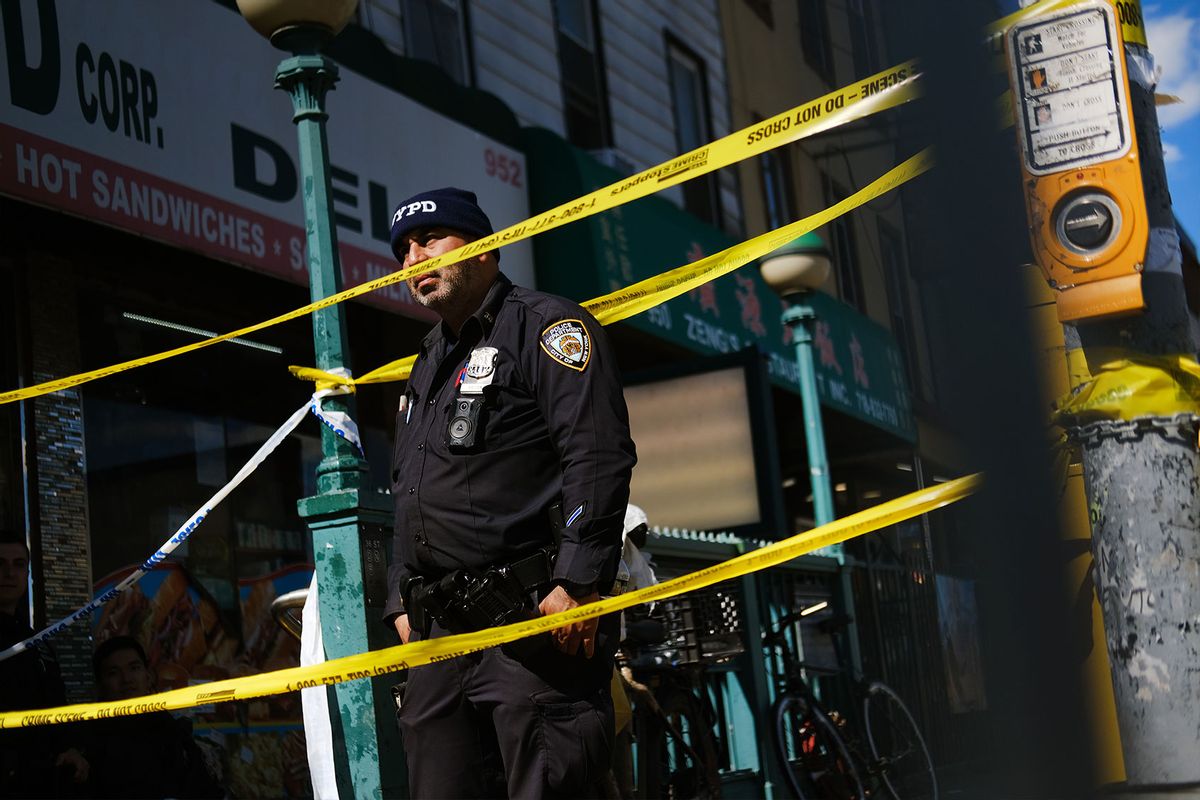 Police gather at the scene of a shooting at the 36 St subway station on April 12, 2022 in the Brooklyn borough of New York City. According to authorities, at least 29 people were reportedly injured, including 10 with gunshot wounds, during a shooting at the 36th Street and Fourth Avenue station in the Sunset Park neighborhood. (Spencer Platt/Getty Images)
--

As most New York City residents could tell you, despite what conservative suburbanites would like to believe, riding the subway is much safer than driving. That's why Tuesday's mass shooting, in which 10 people were injured by gunfire, was so shocking. The crime, as terrible as it is, is the epitome of the word "anomaly." Indeed, it's nearly a miracle how rare mass shootings on subways are in a country awash with guns.  As of this morning, there have been 131 mass shootings this year alone. They happen in schools, workplaces, homes, nightclubs, and on public streets, but with surprising infrequency on public transportation. As a New York Times headline tacitly admitted, a mass shooting on the subway is something "the city had long avoided."

Unfortunately, that a headline admits such events are rare is itself an anomaly. By and large, the mainstream media — especially the New York Times — fell right into the trap of using this shooting to feed a misleading right-wing narrative that paints cities as dangerous hellholes. Heaven help every urban-dwelling child of a Fox News addict who had to endure pressure to live out their parent's Hallmark movie fantasy. In truth, this crime says very little about cities being uniquely dangerous. Instead, it's a story about how America's failure to enact sensible gun control leads inevitably to senseless gun violence. But, to read the mainstream media coverage, one would think that this one bizarre crime was somehow indicative of a general trend of cities going to pot.

The internal headlines at the New York Times also misleadingly linked this story to an overall narrative about crime. As civil rights activist Alec Karakatsanis noted, however, this is "a unique mass shooting event by a lone gunman," and has little relationship to "the kinds of daily crime stories" that paper usually covers. Progressive journalist Nick Wing criticized the New York times for calling the shooting "reminiscent of a string of other incidents in recent years," by pointing out that it's "the abnormal characteristics are what makes it most concerning."

To read the mainstream media coverage, one would think that this one bizarre crime was somehow indicative of a general trend of cities going to pot.

To make it even worse, perpetuating a "cities are dangerous" narrative is exactly what the alleged gunman appears to have desired.

The suspect in the shooting, a Philadelphia resident named Frank James, posted online videos griping that New York City Mayor Eric Adams "can't stop no crime in no subways" and echoing complaints about the city's unhoused population often heard in right-wing media. Using this shooting to tell a generalize about cities and crime is giving the alleged gunman exactly what he wants.

To be certain, there is a rise in crime, especially violent crime, going on in the U.S. But the spike appears to be a national one, and not just about the coastal blue cities that the right-wing media loves to demonize. As Igor Derysh wrote in Salon last month, "Republican states are reporting much higher homicide rates and some of the highest murder rates are in cities led by Republican mayors." In fact, murder "rates were an average of 40% higher in 2020 in the 25 states that Trump carried in the last election, compared to states carried by Biden." Some of the biggest murder rate spikes, which began while Donald Trump was president, have been in states like Montana and South Dakota. New York City remains one of the safest cities in the country, while smaller cities like Jackson, Mississippi and Cleveland, Ohio are among those with the most violent crime.

RELATED: The NRA way of life is ruining our nation

One look at the ongoing list of mass shootings in America also demonstrates the "everywhere" nature of the problem.

As crime analyst Jeff Asher and data scientist Rob Arthur recently wrote in the Atlantic, "More guns are behind America's murder spike." While there is inevitable quibbling over the data, the trend is pretty clear-cut: There was a surge of gun-buying at the beginning of the pandemic, and as night follows day, there was then a surge of people using their new guns for what guns were designed to do, which is to shoot people. Indeed, federal data shows a clear-cut trend of newly purchased guns turning up at crime scenes.

There are too many guns out there and it's way too easy for unstable people to arm themselves.

As German Lopez of the New York Times writes, there are likely many contributing factors to the rise in violent crime, including the pandemic's disruptions and the conflict between police and communities in the wake of protests against police violence. But there can be no doubt that guns are a major factor, if not the major factor:

Research generally shows that where there are more guns, there is more gun violence.

If there is one thing that links this rare subway mass shooting to the rise in overall violent crime, it's this: There are too many guns out there and it's way too easy for unstable people to arm themselves.

It's not irrelevant that James seems to have loaded up in Philadelphia before traveling to New York City. The Giffords Law Center gives Pennsylvania a B- for its gun laws, compared to New York's A- rating. If you're an unhinged person looking to kill a bunch of people, you'll have better luck getting armed for it in Philadelphia than in New York City.

But this also underscores how much this is a national problem. Even when states do their level best to make it hard to get guns, there's little they can do about criminals bringing guns over state lines. We have a national gun problem that requires national solutions. Blaming cities for this may suit the needs of right-wing propagandists, but it does little to actually solve the problem.