Yes, crime is up. But eight of the 10 states with the highest murder rates in 2020 voted for Donald Trump 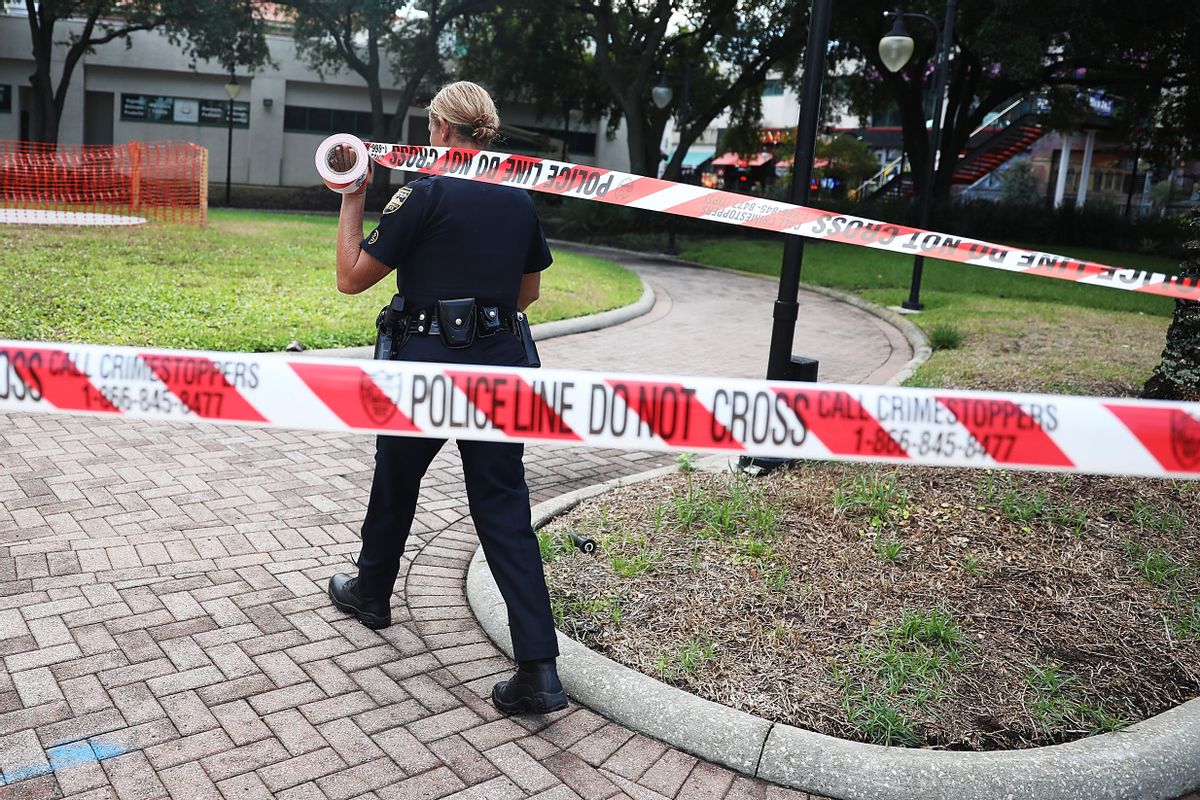 A Jacksonville Sheriff officer uses police tape to keep people out as law enforcement investigates a shooting at the GLHF Game Bar at the Jacksonville Landing on August 27, 2018 in Jacksonville, Florida. (Joe Raedle/Getty Images)
--

Republicans have repeatedly blamed Democratic policies in big cities for a rise in murder rates during the pandemic. In fact, Republican states are reporting much higher homicide rates and some of the highest murder rates are in cities led by Republican mayors, according to data compiled by the centrist think tank Third Way.

Republicans from former President Donald Trump to congressional lawmakers to Fox News talking heads have repeatedly pointed to Democrats' supposed "soft-on-crime" approach, bail reform laws, and "defund the police" rhetoric from left-wing activists for fueling a surge in violent crime. But the Third Way report shows that "murder rates are far higher in Trump-voting red states" and some of the highest murder rates are in cities led by Republicans.

"Republicans seem to do a much better job of talking about stopping crime than stopping crime," Jim Kessler, one of the report's authors, told Axios.

Murder rates were an average of 40% higher in 2020 in the 25 states that Trump carried in the last election, compared to states carried by Biden — and far higher than in "deep blue" states like New York and California, where Republicans have assailed Democratic criminal justice reforms. Instead, the highest murder rates were found in states like Mississippi, Kentucky, Alabama, South Carolina and Arkansas — all of which are dominated by Republicans and were won easily by Trump in 2020.

RELATED: Did "defund the police" lead to an increase in murder? Almost certainly not

In all, eight of the 10 states with the highest per-capita murder rates in the country voted for Trump in 2020. None of those eight states have been carried by a Democrat since 1996. Mississippi had by far the highest murder rate at 20.5 murders per 100,000 residents, followed by Louisiana at 15.79. Alabama, Kentucky and Missouri all had murder rates higher than 14 per 100,000 compared to a national average of 6.5. The only states that voted for Biden to appear in the top 10 are Georgia — a longtime Republican stronghold that went blue by a tiny margin in 2020 — and New Mexico.

Republicans and the media have also focused on Democratic-led cities in coastal states, but many Republican-led cities have posted much higher murder rates. Despite intensive media coverage of increasing crime in House Speaker Nancy Pelosi's San Francisco district, the murder rate in that city was only half that of House Minority Leader Kevin McCarthy's district in Bakersfield, a Southern California city with a Republican mayor that overwhelmingly voted Trump. Jacksonville, Florida, another Republican-led city, had 120 more murders than San Francisco did in 2020 (with only a slightly larger population) but received a tiny fraction of the national news coverage.

Jacksonville, which had a murder rate of 19.78 per 100,000 residents, and other Republican-led cities like Tulsa (19.64), Fresno, California (14.09), Bakersfield (11.91), Oklahoma City (11.16), and Lexington, Kentucky (10.61), have much higher murder rates than the two biggest cities in the nation, New York (5.94) and Los Angeles (6.74). Some Democratic-led cities, including Chicago (28.49) and Houston (17.32), have certainly seen alarming increases in crime, but Fox News coverage and Republican rhetoric has focused vastly more on those examples than on comparable cities with Republican mayors.

There has undeniably been an increase in homicides during the pandemic. The U.S. saw a 30% increase in homicides in 2020. Third Way data shows that murder rates have climbed slightly faster in red states than blue states. Murder rates rose by an average of 32.2% in states that voted for Trump in 2020, compared to 30.8% in states that backed Biden. Three of the five states that saw the highest increases voted for Trump: Wyoming (91.7%), South Dakota (69%), and Nebraska (59%), all rural states with no large cities that do not fit into the Republican narrative. Among states that voted for Biden, Wisconsin saw the highest increase at 63.2%, while Minnesota saw murders rise 58.1%. Only one of the 10 states with the highest increases was among the top 20 states in population density — and that was Delaware, with a total population of less than 1 million. California's murder rate increased by 31%, about the national average, while New York had a higher-than-average increase of 45.8%.

A 2021 analysis previously found that the murder rate increase in Republican-led cities was virtually identical to that in Democratic-led cities. Despite Republican claims, no city in the nation has "defunded" the police and hardly any have cut police budgets.

This is more than a matter of Republican talking points or Fox News commentary. Mainstream news outlets like CNN and The New York Times have similarly pumped out countless headlines warning of rising murder rates in big cities.

"The current narrative around crime and murder is convenient and wrong," the Third Way report concluded. "The data clearly paint a different story. The increase in murders is not a liberal cities problem but a national problem. Murder rates are actually higher in Republican, Trump-voting states that haven't even flirted with ideas like defund the police," the think tank said. "A more accurate conclusion from the data is that Republicans do a far better job blaming others for high murder rates than actually reducing high murder rates."