Joe Biden is right about the rise in crime: Blame guns — not police or protesters — for the violence

Conservatives are using crime as cover for ugly race-baiting, but their own lax gun policies are the real culprit 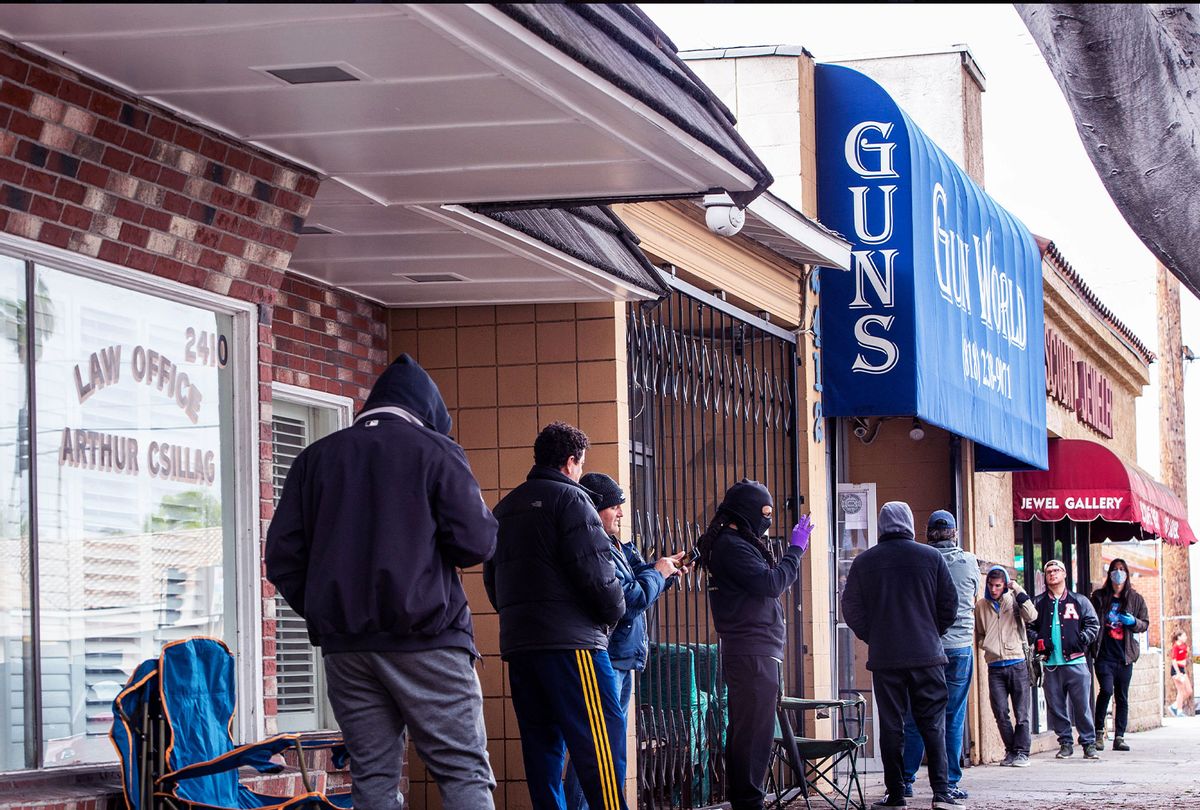 Shoppers wait in line to purchase ammunition and guns at Gun World in Burbank on Tuesday, March 17, 2020 as US sales of guns and ammunition soar amid the coronavirus outbreak. (Sarah Reingewirtz/MediaNews Group/Pasadena Star-News via Getty Images)
--

Violent crime is on the rise and it's making Republicans happier than a fire sale on wraparound sunglasses.

Conservatives will find any excuse to indulge in their favorite sport: racist fear-mongering. The current uptick in violent crime fulfills their desire to use police to terrorize and stigmatize people of color while spinning it as merely in the interest of "public safety." (Which is especially rich coming from the same people who left hundreds of thousands of Americans to die of COVID-19 rather than accept emergency pandemic measures.) And boy, they're throwing themselves into the scare tactics with a relish usually reserved for sharing grammatically confusing memes on Facebook.

As the AP reported earlier this month, Republican politicians across the country are using rising crime rates as an excuse to pass laws aimed at suppressing Black Lives Matter protests and at protecting police budgets from re-evaluation. House Minority Leader Kevin McCarthy, R-Calif., sent a letter to Attorney General Merrick Garland on June 11 blaming crime on "radical and reckless decisions by some jurisdictions to defund their police forces," which is, at best, a wild exaggeration of what have largely been efforts to redirect funds to crime prevention. Rep. Tom Emmer of Minnesota, the head of the National Republican Congressional Committee, falsely accused Democrats of supporting "the dangerous idea of defunding the police."

Right-wing pundits are even more stoked about this crime rise.

On Tuesday, in another "nuh-uh, you're the racist!" segment, Laura Ingraham of Fox News accused Democrats of being a "pro-crime party" for the purpose of "keeping minority communities dependent and scared." Then there is talk show host Ben Shapiro, who recently issued this face-plant of a tweet, in which he appears to have forgotten that crime, by definition, is already illegal.

It's not just that it's gross, seeing all of this GOP glee in the face of murder and mayhem, it's that it's all based on misinformation.

Republicans want to blame Democrats for rising crime, but, in reality, they should be pointing the fingers at themselves. The reason that Americans are experiencing a bloody crime surge is because it's way too easy for people to get guns. And the blame for that falls squarely on the shoulders of Republicans. As a carefully researched piece for the New Republic by Fordham University law professor John Pfaff shows, the evidence for the Republican contention that the uptick in violent crime is due to efforts to reassess police budgets and overly punitive justice systems is, unsurprisingly, nonsense:

To be clear, the defenders of the status quo are mistaken. Not only have reforms been less extreme than they often claim, but the rise in homicides has occurred more or less equally in places that adopted reforms and those that rejected them. And given how few places have significantly altered their approach to crime, the homicide spike by and large took place on the status quo's watch. Those who want policy to remain more punitive are thus arguing for more of what has mostly failed us this past year, and they are trying to blame reforms that appear to be uncorrelated with the surge.

The sociological reasons for the rise are still ambiguous, though there is little doubt that the pandemic contributed by adding economic and social stress, while also depriving young people of jobs and school opportunities that keep them out of trouble. Pfaff also suggests there may be a reason to believe that rising tensions between police and communities contribute, if only because people are unwilling to cooperate with law enforcement they see, for good reason, as oppressive. If that relationship "deteriorates significantly," Richard Rosenfeld, a criminologist at the University of St. Louis-Missouri, told Salon's Igor Derysh in February, "that simply widens the space for street justice to take hold."

This leads us to the one major contributor to rising crime that is indisputable, at least by anyone looking at the evidence in good faith: The proliferation of easily accessible guns.

Early in the pandemic, there was a foolish run on guns by people who believe, against all evidence, that owning a gun makes you safer. (It actually raises the risk of injury or death.) More than a year into the pandemic, the fuller picture emerged and it wasn't great. The surge of gun sales seen at the beginning of the pandemic has remained disturbingly high. A shocking share of the new gun buyers then were first-time gun owners, raising the percentage of American households with a gun from 32% in 2016 to 39% in the past year. A surge in gun purchasing usually "slows down. But this just kept going," Dr. Garen J. Wintemute, a gun researcher at the University of California at Davis, explained to the New York Times.

Unlike some of the more complex sociological explanations for crime, the relationship between guns and violence is straightforward: More guns equals more violent crime, especially murder. As German Lopez of Vox explained in April, "The US is an outlier on gun violence because it has way more guns than other developed nations."

Notably, not all crime went up during the pandemic.

Overall, crime went down about 6%, due to relatively steep declines in theft, drug crimes, and other non-violent offenses. And the overall violent crime spike was only 3% compared to the 25% spike in murders, in particular. This country doesn't have a general crime problem. It has a shooting-people problem. And the reason is Americans have too many guns, due to decades of Republicans actively working on behalf of the gun industry to make guns ridiculously easy to buy.

The good news is that, despite conservative efforts to make this about cops or protesters or whatever other stand-in they use for race-baiting, Democrats do get that the big issue here is guns.

On Wednesday, President Joe Biden rolled out a new anti-crime initiative that is focused primarily on "the flow of firearms used to commit crimes." A major part of the initiative will be a crackdown on legal gun sellers who are found in violation of anti-trafficking laws. On Tuesday, Attorney General Merrick Garland announced that the Department of Justice was forming "firearms trafficking strike forces" that "will investigate and disrupt the networks that channel crime guns into our communities with tragic consequences."

These efforts are a likely reaction to major reporting from USA Today and The Trace earlier this year that found that licensed gun dealers are fueling the black market with back door, illegal gun sales. Worse, the Bureau of Alcohol, Tobacco, Firearms and Explosives has been basically looking the other way for years. Most illegal guns start off as legal guns, so closing this loophole will be helpful, especially in big, liberal cities where gun trafficking is used to get around more stringent gun control laws.

Still, the larger problem with crime isn't so much the black market as it is the proliferation of guns, period. The illegal trade exists only because it siphons off the legal trade. The data shows time and again that the correlation between homicide and gun ownership rates is rock solid. Since that correlation finding holds regardless of cultural differences, laws, or any other factor, it's safe to assume the relationship is causal.

More guns = more murder. The surest way to reduce murder rates is to get guns out of people's hands.

If Democrats want to fight back against Republicans exploiting violent crime for the purposes of racist demagoguery, the best way is to focus on the gun safety issue. This tactic has two advantages: It's true and it's simple.  And it puts the blame squarely where it belongs: on Republicans who fueled America's violent crime problem for decades by resisting any and every effort to make it harder to murder people with easily accessed firearms.