If "Blue Lives Matter," how come conservatives won't back gun control to save cops?

A shooter injured six cops in Philly, but the right still rejects gun control that could keep officers safer 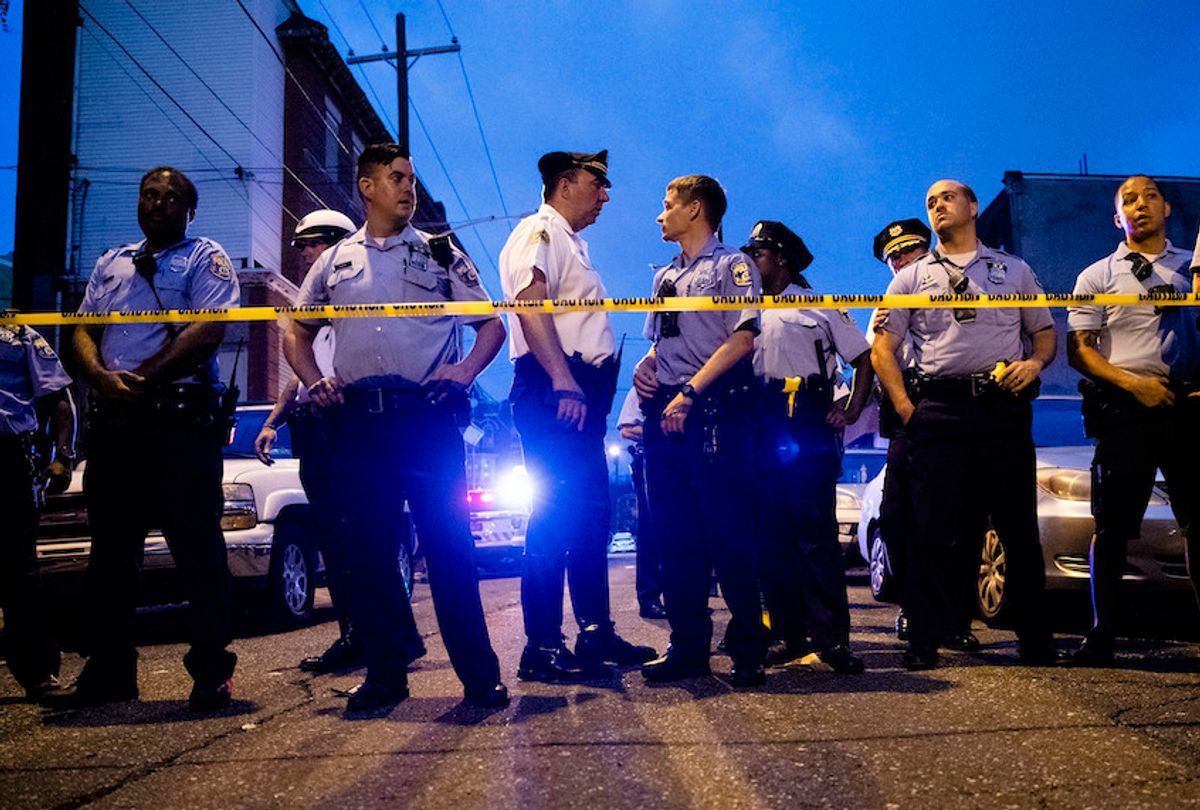 In response to the growth of the Black Lives Matter movement — which addresses police violence against civilians, among other things — angry conservatives retaliated by creating the pseudo-movement "Blue Lives Matter." That phrase was meant to imply that people who want to reduce civilian killings by police are trying to get cops killed, and that conservatives are the only ones who are standing up for the boys in blue who keep our streets safe. Donald Trump, unsurprisingly, has run with this line of argument, using it, as well as showy and insincere displays of patriotism, to attack black celebrities who speak out against racism.

It turns out, however, that when given a choice between protecting "blue lives" and defending ridiculously lax gun laws, conservatives will always choose the latter. That was amply demonstrated after Wednesday's mass shooting in Philadelphia, in which six police officers were injured and two were held hostage during an hours-long standoff with a heavily armed man who was trying to evade arrest on drug charges.

"When will it stop, right?" presidential candidate Sen. Kamala Harris, D-Calif., told CNN's Wolf Blitzer as the standoff was ongoing. "Part of my focus on what we need to do around smart gun safety laws is we have to have more enforcement around gun dealers."

Right-wing America responded, as it generally does, by immediately prioritizing guns over human lives — in this case, the lives of police officers.

Beth Baumann of Townhall scolded Harris, accusing the former California attorney general of not understanding this issue and pompously declaring that "Americans are sick and tired of politicians exploiting tragedies," as if there was anything exploitative about wanting public safety policies that make both citizens and police safer.

Fox News helpfully ran an article collecting the outraged reactions of right-wing mouth-breathers who denounced Harris for "politicizing" the shooting and saying she shouldn't "pre-judge the shooter," as if it were possible that the guy had some good reason for shooting cops and terrorizing the neighborhood.

Philadelphia Mayor Jim Kenney, a Democrat, told reporters after the suspect was arrested that "our officers" need the public's "help with gun control. They need help with keeping these weapons out of these people's hands."

"NO LAW couldve stopped this shooting or any other bc CRIMINALS DO NOT FOLLOW THE LAW," read a typical semi-literate tweet responding to Kenney's gun control comments.

It is true that the suspect, Maurice Hill — who had an arsenal sufficient to hold off the cops for hours — has a lengthy criminal record, including a 2008 federal conviction for illegal gun ownership. But it's simple-minded to suggest that this crime therefore has no implications for how we regulate guns. On the contrary, there's ample reason to believe that making it harder to get a gun legally will also make it a lot harder to get a gun illegally.

"All guns start out as legal guns," epidemiologist Anthony Fabio of Pittsburgh's Graduate School of Public Health told the Washington Post in 2016.  But although they are legally sold in the first instance, a "huge number of them" end up in criminal hands, he added.

In fact, a study run by Fabio's team showed that most criminals who commit a gun-related offense are armed with a weapon that was legally purchased by someone else.

There are three basic ways that people who are barred from legally owning guns exploit the legal gun market to get them anyway. First, they exploit loopholes in federal gun laws that allow sellers to classify sales as "private" in order to evade background checks. Second, they use "straw man" buyers who function as middlemen, purchasing guns legally and then turning around and selling them to criminals. Third, they steal them from legal gun owners.

In all three cases, much stronger gun laws — such as the proposal from presidential candidate Sen. Cory Booker, D-N.J., to enact a federal gun licensing program — could go a long way towards keeping criminals from getting guns illegally. That would include penalties for people whose legally purchased guns end up in the hands of criminals, either because they sold them off or because they failed to report that the guns were stolen (as the law generally requires).

Conservatives' utter lack of interest in stronger gun laws to protect police, despite all the "blue lives matter" talk, is certainly hypocritical. But it's hardly surprising. Both the sanctimony about police and the attachment to guns are symbolic issues for conservatives. They have less to do with real concerns for public safety and more to do with the racist, nationalist resentment that also led to Donald Trump's election.

"So many aspects of American gun culture are really entwined with whiteness and white privilege," Jonathan Metzl, the author of "Dying of Whiteness: How the Politics of Racial Resentment Is Killing America's Heartland," told the Guardian after last week's mass shooting in El Paso.

As research published in PLOS One in 2013 showed, there is a strong link between holding racist beliefs and opposition to gun control, at least among Americans. As the authors pointed out, owning a gun increases the risk of dying from a gunshot wound, but many white Americans buy guns anyway, driven by the fear that they urgently need to protect themselves from black and brown criminals. The symbolism of a gun, as a totem of racist fear, appears to trump any willingness to consider the actual risk factors of gun ownership.

Similarly, Blue Lives Matter is more a vehicle for racist resentment than it is a sincere interest in the safety of law enforcement officers. It only cropped up as a conservative slogan to demonize Black Lives Matter activists and to suggest there was no way to curtail police brutality against people of color without increasing the lethal risks to law enforcement.

As German Lopez of Vox explained in 2018, America's lax gun laws mean the police, when interacting with civilians, feel "a constant fear that a gun may be present," because that's so often true. So cops often enter situations feeling jumpy and nervous, ready to fire back at a moment's notice. Add in the undeniable problem of widespread racial bias and the result is that civilians, especially black people, are frequently shot by police who mistake everyday items like wallets and cellphones for guns.

This isn't just speculation, by the way. An analysis by Vox and John Roman, a senior fellow at NORC at the University of Chicago, showed that there is a correlation between "weaker gun laws and higher rates of gun ownership" and police shootings. Their findings echo a 2017 study published in the American Journal of Public Health showed that stronger gun control laws correlate with fewer police shootings of civilians.

It turns out that Sen. Harris, whose state of California has the strongest gun control policies in the country, knows what she's talking about. Pennsylvania, where the Philadelphia shooting happened, only has a C+ rating on gun control, as graded by the Giffords Law Center.

In terms of real-world effects, the conservative affection for police officers is incredibly shallow. For the right, cops are useful as a weapon to attack people of color and progressive activists. But if protecting "blue lives" comes in conflict with the right-wing agenda, especially the antipathy toward gun control and an absolutist stance on the Second Amendment, conservatives will pick guns over cops' lives every single time.