The NRA way of life is ruining our nation

Decades of gun propaganda has created a nation of sociopaths 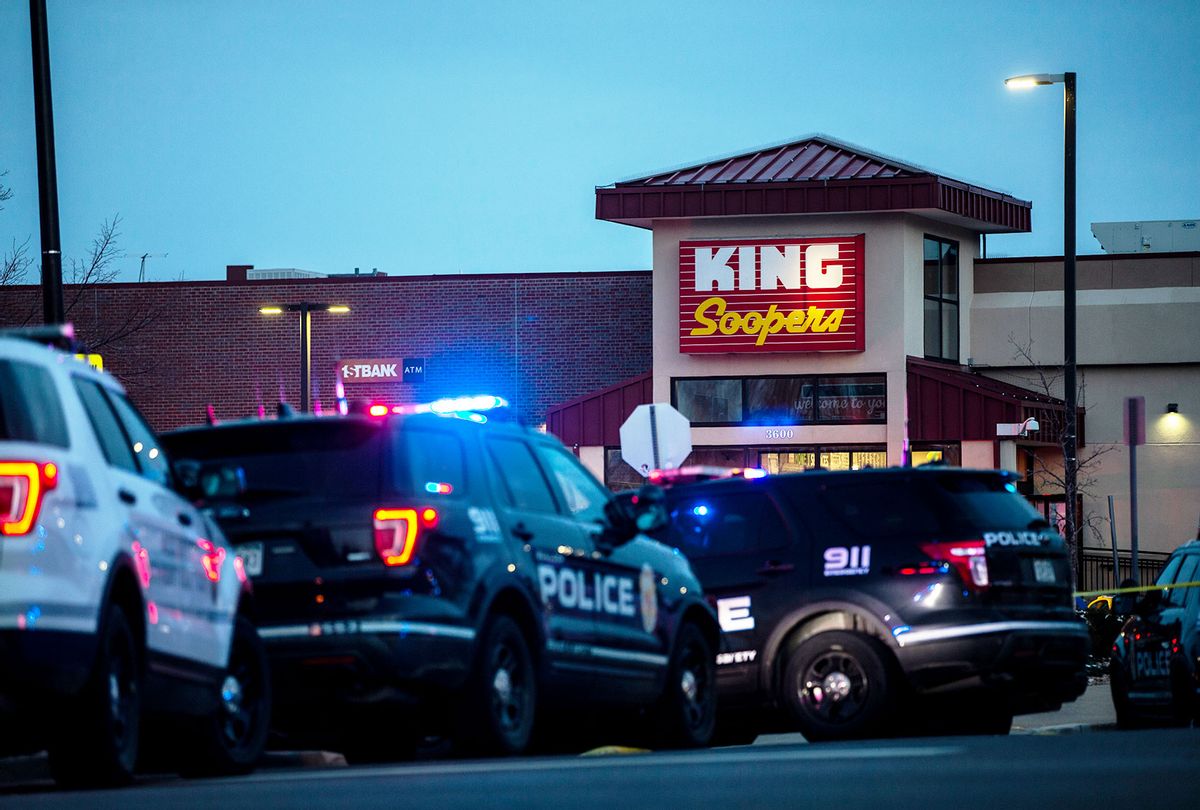 Police respond at a King Sooper's grocery store where a gunman opened fire on March 22, 2021 in Boulder, Colorado. Ten people, including a police officer, were killed in the attack. (Chet Strange/Getty Images)
--

Right on the heels of last week's horrific shooting spree by a 21-year-old at three Atlanta-area Asian day spas that left eight dead comes another mass murder, this time with a death toll of 10 at a Boulder, Colorado grocery store. The suspect, 21-year-old Ahmad Al Aliwi Alissa was reportedly armed with an AR-15. While everyone waits for an apparent motive (officials said an investigation would not take fewer than five days to complete) one thing is absolutely certain: Little will be done to address the primary cause of mass shootings. The ease with which any random man with an inchoate grievance can pick up a gun and rapidly snuff out the lives of strangers to make himself feel powerful will remain unchecked.

That's not because Americans oppose stricter gun control laws. In fact, around 90% of Americans polled consistently support background checks for all gun sales. But when House Democrats introduced a bill earlier this month making background checks universal, all but eight Republicans voted against it. And forget about even turning this bill into law. The filibuster's continued existence makes it impossible to get it past Republican obstruction in the Senate.

The grim reality is that the entire nation is in the thrall to a minority of extremely insecure mostly white men who, drunk on decades of NRA-fueled propaganda, have decided that having the ability to commit mass murder at a moment's notice is a crucial component of maintaining their manhood against the ever-encroaching threats from de-gendered Potato Heads and lady video game players. Most of these men claim exoneration because they don't personally grab one of their many overpriced killing machines to lay waste to a grocery store or high school. Grotesquely, some even use these mass shootings to indulge in public fantasies about how they would totally stop an active shooter, though somehow they never seem to actually get around to doing it. But ultimately, they've become complacent in the face of mass murder from decades of being told by right-wing media that there's a binary choice between preventing murder and watching Michelle Obama personally run off with their testicles in her handbag. Worse, the right has cultivated an overall suspicion of the very concept of concern for the lives of others at all.

Pollster Frank Luntz recently held a focus group of vaccine-hesitant Republicans, and one of the justifications offered for refusing to get the vaccine was chilling precisely because the defiance was conveyed so matter-of-factly: "We are not all in this together."

The comment really cut to the heart of the cultivated stance of sociopathy that has fueled the GOP for decades now. There is much that conservatives think is owed to them, like the icons of their childhood such as Mr. Potato Head or Dr. Seuss to never change with the times, or for Ghostbusters to never be female, or to never have to press 1 for English nor ever see a Black athlete kneel instead of stand during the national anthem.

But when it comes to what they owe others, their answer is all too often less than nothing.

Indeed, all we hear is that it's an assault on their alleged "freedom" to allow their neighbors the ability to go about simple tasks of life without fear of being gunned down by some idiot who is still mad that Becky the cheerleader didn't want to go to the homecoming dance with him.

Blame the NRA and the gun lobby in general.

For decades, the gun industry has been threatened by declining sales, due to the fact that they sell expensive gear that almost no one in the modern world has any real need to own. Rather than closing up shop or shifting to making stuff people actually could use, such as fidget spinners or iPhone accessories, the gun industry shaped its marketing around the sexist and racist impulses of the worst people in the nation. So while fewer people overall are buying guns, this shrinking minority end up building small arsenals, trying to stifle their own insecurities with ever more gun purchases. And the gun lobby, aided by a massive right-wing propaganda machine, has convinced them that anyone who questions the wisdom of gun mania is clearly coming for your "freedom".

The right-wing belief that "freedom" depends on others having to die for pointless reasons now manifests in all sorts of ways. It can be seen in the resistance to even the most reasonable efforts to fight climate change because heaven forbid you have to get a slightly different kind of light bulb so that your grandchildren can enjoy living on a planet that isn't beset by biblical levels of natural disasters. Or the temper tantrum over Obamacare, which was largely fueled by a willingness to let other people die rather than run even the smallest risk that your doctor's appointment might have to be scheduled a week later. And lately, it has manifested in the right-wing whining over wearing masks in grocery stores or being asked to vaccinate, because the idea that others must die to spare them the slightest inconvenience is a bedrock belief of modern conservatism.

The frustrating thing is that, as that 90% support for background checks shows, even most Republican voters aren't completely disdainful for the concepts of the common good or the notion that others have a right to live. Many of them wear masks without much complaint, recycle their trash, and stopped whining about seatbelt laws decades ago. But the Republican Party is controlled by its most extreme elements, in no small part because huge swaths of white America have decided that it's better to let utterly sociopathic politicians be their leaders than to even consider voting for a Democrat. So, whatever their personal preferences on gun control or public health might be, Republican voters end up participating in a system where human life is treated as less valuable than some yahoo's right to own as many boom boom machines as he feels is necessary to distract him from the lingering fear that he'll never be a real man.

It's hard not to feel helpless in the face of seemingly no change in the face of one mass murder after another. In the aftermath of this Boulder shooting, it was swiftly revealed that the city had tried to ban the kind of assault rifle used to take 10 people's lives, but that a district judge had sided with the NRA to shoot the regulation down.

The power cultivated by the NRA and their small but loud minority of supporters feels insurmountable at times. But it is not time to give up and just accept that regular mass murder is an unchangeable part of American life. The NRA has been thankfully hobbled by New York investigations into their massive corruption. While public opinion is still not where it needs to be on gun control, there is growing support for at least some regulations that could do some good. And, as the $1.9 trillion American Rescue Plan shows, sometimes there are political shifts that allow previously unthinkable legislation to pass.

It will take hard work and organizing to continue pressuring both Democratic and Republican lawmakers, but the gun industry is not invincible. We can live in a country where it's safe to buy a frozen pizza without getting shot in the head. We just have to keep pushing for it.