Face it: The real insult to the "Ghostbusters" franchise is its 1989 sequel, not 2016 all-female reboot 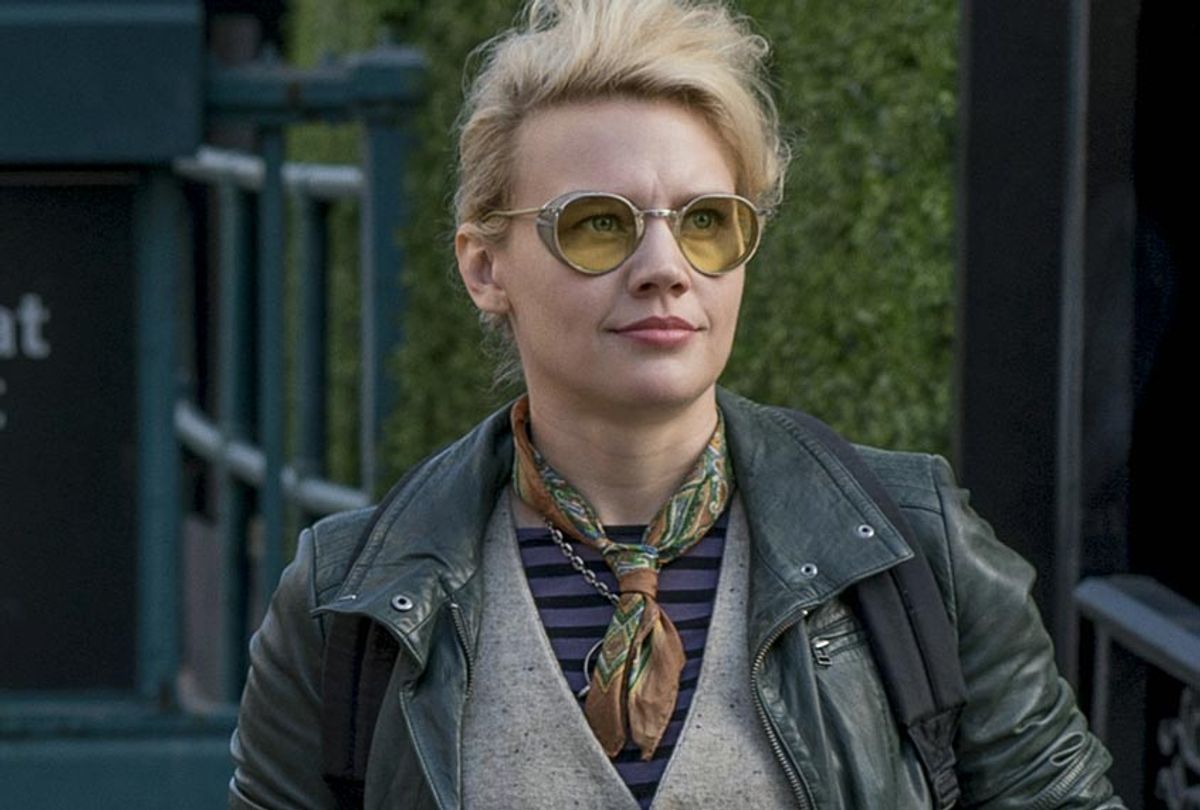 Let's pretend, hypothetically, that we lived in a world without sexism. In that hypothetical universe, the 2016 "Ghostbusters" reboot (later officially re-dubbed "Ghostbusters: Answer the Call") didn't become a front in the larger mid-2010s gender wars that stretched from Gamergate to Donald Trump's election. Instead the film would have been remembered for either possessing or lacking quality, free from any association with obsessive fanboy hatred. It would have just been a light-hearted supernatural action comedy, one that like the original 1984 "Ghostbusters" starred top-name comedians — many of them hailing from "Saturday Night Live" — and would succeed or fail based primarily on whether it was funny, and secondarily on whether it told a good story in a compelling ghost-based fictional universe.

There are many reasons why it is tragic for us to not live in a world without sexism, and the fact that "Ghostbusters: Answer the Call" hasn't received its due is far from being foremost among them. Nevertheless, given how that movie has re-entered the news cycle due to controversial remarks by the director of the upcoming "Ghostbusters 3," it is worth examining how — amidst all the hubbub over sexism and right-wing politics surrounding the 2016 movie — the fact that "Ghostbusters: Answer the Call" is actually quite good was lost.

In a strange way, we can thank "Ghostbusters 3" director Jason Reitman — the son of Ivan Reitman, who directed the first two films in the series — for providing us with an opportunity to examine this question. Earlier this week he aroused controversy when he told podcaster and comedian Bill Burr that "we are in every way trying to go back to original technique and hand the movie back to the fans." He later backpedaled from that comment, tweeting that it "came out wrong" and that he has "nothing but admiration for [director] Paul [Feig] and [stars] Leslie [Jones] and Kate [McKinnon] and Melissa [McCarthy] and Kristen [Wiig] and the bravery with which they made Ghostbusters 2016. They expanded the universe and made an amazing movie!" Feig also jumped to Reitman's defense, tweeting that "Jason was a supporter of mine at a time when I couldn’t get movies made. He has always been a true gentleman to me and a supporter of Ghostbusters: Answer the Call. I can’t wait to see his take on the Ghostbusters universe. Big love and respect to you, Jason. Your fan, Paul"

For what it's worth, I've interviewed Reitman and found him to be intelligent, courteous and professional. (I've also liked his movies, particularly "Juno" and "The Front Runner," and believe he is genuinely talented.) That said, it's difficult to arrive at an alternate explanation for his comment that is not intended to pander to the misogynists who were determined to destroy "Ghostbusters: Answer the Call." To be directing a "Ghostbusters" film in this century and not be aware of the messaging that speaks to the people who downvoted Feig's "Ghostbusters" en masse without seeing it, viciously harassed its stars, whined about having their childhoods destroyed and stirred up a faux controversy because — whether they admit it or not — they couldn't stand it that the original's all-male core cast had been replaced with women seems at best dangerously naive.

The irony, of course, is that "Ghostbusters: Answer the Call" is a mark that Reitman should strive to hit in his own version, not least of all because it has the same qualities that made the 1984 "Ghostbusters" and its main characters, played by Bill Murray, Harold Ramis, Dan Aykroyd and Ernie Hudson, so classic.

Foremost among them is rewatchability. With the 1984 "Ghostbusters," one of the appeals is that it has so many quotable lines, from Venkman's dry and cynical one-liners to Spengler's awkward nerdiness, balanced by Ray Stantz's childlike enthusiasm and Winston's pragmatic exasperation. Because the dialogue is so funny and so memorable, that version of "Ghostbusters" rewards repeated viewings by allowing fans to eagerly anticipate an upcoming quip and laugh appreciatively when it arrives. The story surrounding it is almost an afterthought; although star and co-writer Aykroyd apparently believes in a lot of the metaphysical mumbo-jumbo spouted through the running time, the movie doesn't get bogged down in its narrative. It is, more than anything else, an opportunity for talented comedians to riff their way through a ghost story by treating hauntings like a problem to be faced by blue collar exterminators rather than God-fearing exorcists.

"Ghostbusters: Answer the Call" has a similar rewatchability factor, albeit for slightly different reasons. There are plenty of great lines in the movie, many of which go to Jones' character Patty Tolan, who reacts with appropriate terror to the supernatural antics and reminds her more jaded colleagues that, yes, interacting with ghosts should actually be a horrifying experience. Chris Hemsworth's Kevin also has many moments to shine in terms of dialogue; while it's easy to take for granted in a post-"Thor: Ragnarok" world that Hemsworth can be quite funny, this was not common knowledge before "Ghostbusters: Answer the Call," and his subversion of the dumb blonde trope here revealed that trait to the moviegoing world. And both Kristen Wiig's Erin Gilbert and Melissa McCarthy's Abby Yates manage to anchor the movie by rooting their comedy not just in one-liners, but in their palpable tension as former friends, each feeling abandoned by the other.

Perhaps the standout, though, is Kate McKinnon as Jillian Holtzmann. As Megan Logan from Inverse put it, the "glorious weirdo" known as Holtzmann works because "donning goggles and developing dangerous spirit-wrangling tech, Holtzmann makes no attempt to fit into the small boxes that women are forced to inhabit — both onscreen and in the real world." Like Ramis, McKinnon plays her Ghostbuster as a caricature of a scientist, but whereas Ramis gave his version stereotypical Asperger's traits (knowingly or otherwise), McKinnon goes in the opposite direction. Her Holtzmann brims with self-confidence, revels in her own off-beat sense of humor and merges Stantz's endearing excitement for ghostbusting technology and lore with her own distinctive physical ticks and quirks. As with the rest of the comedy in the movie, Holtzmann's character ages well precisely because the jokes become funnier when you know they're coming.

The other major strength of "Ghostbusters: Answer the Call" is that it's about something more than silly jokes and spooky ghosts. At its heart, it's a tale of outcasts and nerds, people with intense intellectual interests who are mistreated by those around them because their ideas are "fringe" and "weird." Some of the funniest and most painful moments of the movie occur when New York City's government privately praises them and seeks their assistance — and then publicly denounces them in hurtful language because, after all, they can't be associated with a bunch of cranks. Ironically, it's a theme that some of this movie's haters could have probably identified with if they were open to it, especially since it was also an important element in what gave the original movie its soul. In both films, there is a sense of real triumph at the end when the Ghostbusters — though still sneered at by the political, social and academic elites — are warmly embraced by the people of the city.

Indeed, the memory of those triumphs helps underscore another bit of evidence that the sexist "'Ghostbusters' 2016 is ruining my childhood" backlash was motivated by misogyny rather than legitimate grievance. While Feig's film did nothing to taint memories of the original movie, there was a film that did — 1989's "Ghostbusters 2." Like the laziest and most insincere sequels, "Ghostbusters 2" decided to wipe away all of the triumphs achieved at the end of the first film so that it could rinse and repeat its story in the follow-up. Remember how satisfying it was for the Ghostbusters small business to become a thriving success that legitimized their longstanding beliefs? Forget that: In "Ghostbusters 2" we learn that despite their victorious battle against Gozer, the Ghostbusters were still viewed as disgraced charlatans, and their business shut down due to a litany of lawsuits. Do you recall the endearing romance between Murray's Venkman and Sigourney Weaver's brainy musician Dana Barrett? Since the creators of "Ghostbusters 2" apparently didn't want to actually build on that relationship, they wrote it into the script that the two broke up and Barrett had a child with another man, so Venkman and Barrett would have to go through similar courtship steps once more.

Yet while "Ghostbusters 2" was perfectly satisfied retroactively diminishing the plot of the first movie in order to mindlessly repeat it, there was one thing it forgot to include: decent jokes. I laughed more in the first ten minutes of the other two "Ghostbusters" films than I did through the entire running time of "Ghostbusters 2." While Bill Murray has a few moments that earn smiles, even his humor feels forced. If the original felt like a bunch of talented comedians cracking wise in the middle of a special effects extravaganza, this one felt very much like the kind of high-budget comedy which fails because the production values outshine all comic inspiration.

In a saner universe, "Ghostbusters 2" would be the film that Reitman would be distancing himself from as he works on "Ghostbusters 3," and "Ghostbusters: Answer the Call" would be widely viewed pretty much as I described it in my original review — as a funny and entertaining blockbuster that fits right in which the bucket of buttery popcorn that you chow down on while watching it. Unfortunately, we live in a world where there are fanboys whose egos are so fragile that the mere thought of seeing a beloved classic reimagined with an all-female main cast is too much for them to bear. As a result, while "Ghostbusters 2" is hardly celebrated, it is "Ghostbuster: Answer the Call" — the movie that actually tried to recapture the original "Ghostbusters" magic and be a genuine gift to its fans — that gets most of the brickbats.