"Politically motivated" charges against Assange "should never have been brought in the first place," Amnesty says 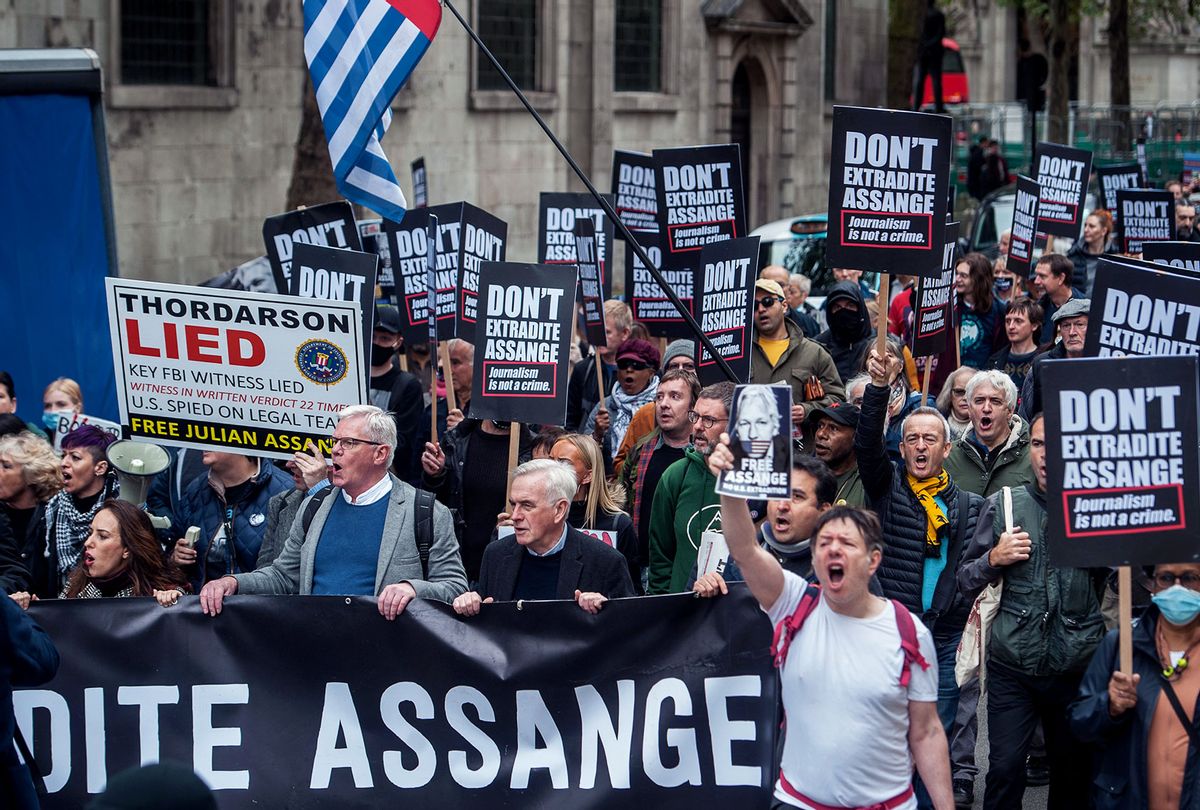 Supporters of Julian Assange marching on October 23, 2021 in London, England. Protesters march From the BBC to the High Court, demanding that Julian Assange is not extradited to the USA. (Guy Smallman/Getty Images)
--

The judge's new and widely expected procedural order, the culmination of a drawn-out legal battle, places the final decision on Assange's extradition in the hands of U.K. Home Secretary Priti Patel, leaving the WikiLeaks publisher with dwindling options to fight his removal to the U.S.—where he could be hit with a 175-year prison sentence.

Patel is expected to make a final decision by May 18, after which Assange can attempt to appeal via judicial review, Reuters reported Wednesday. As Patel weighs the extradition order, Assange will remain jailed in a high-security London prison, where he has languished for years under conditions that experts have condemned as torture.

Human rights organizations wasted no time urging Patel to reject the extradition order. Allowing it to proceed, they warned, would endanger press freedoms around the world, given that the charges against Assange seek to punish a common journalistic practice.

"Publishing information that is in the public interest is a cornerstone of media freedom," said Agnes Callamard, the secretary-general of Amnesty International. "Extraditing Julian Assange to face allegations of espionage for publishing classified information would set a dangerous precedent and leave journalists everywhere looking over their shoulders."

"The charges against Assange should never have been brought in the first place. It is not too late for the U.S. authorities to set things right and drop the charges," said Callamard. "In the meantime, given the politically motivated nature of the case and its grave implications for freedom of expression, the U.K. should refrain from representing the USA in any further appeals."

The Espionage Act charges against Assange were originally brought by the Trump administration. Despite pleas from press freedom groups and progressive leaders across the globe, the Biden administration has opted to continue pushing for Assange's extradition and prosecution.

Rebecca Vincent, director of operations and campaigns at Reporters Without Borders, stressed in a statement Wednesday that "the next four weeks will prove crucial in the fight to block extradition and secure the release of Julian Assange."

"We are seeking to unite those who care about journalism and press freedom to hold the U.K. government to account," Vincent added. "The home secretary must act now to protect journalism and adhere to the U.K.'s commitment to media freedom by rejecting the extradition order and releasing Assange."

In January 2021, a British judge rejected the Trump administration's request to extradite Assange to the U.S. to face espionage charges, citing the country's horrific prison conditions.

But the Biden administration successfully appealed the ruling, and last month the U.K. Supreme Court rejected Assange's request to file an appeal of his own.

"The U.K. has an obligation not to send any person to a place where their life or safety is at risk, and the government must not abdicate that responsibility," Callamard said Wednesday. "The U.S. authorities have flatly stated that they will change the terms of Assange's imprisonment in a federal facility whenever they see fit."

"This admission," she warned, "places Julian Assange at great risk of prison conditions that could result in irreversible harm to his physical and psychological well-being."