The best way to make kimchi, according to my Korean mom

Jean's tips and tricks (and a couple secrets, too!) 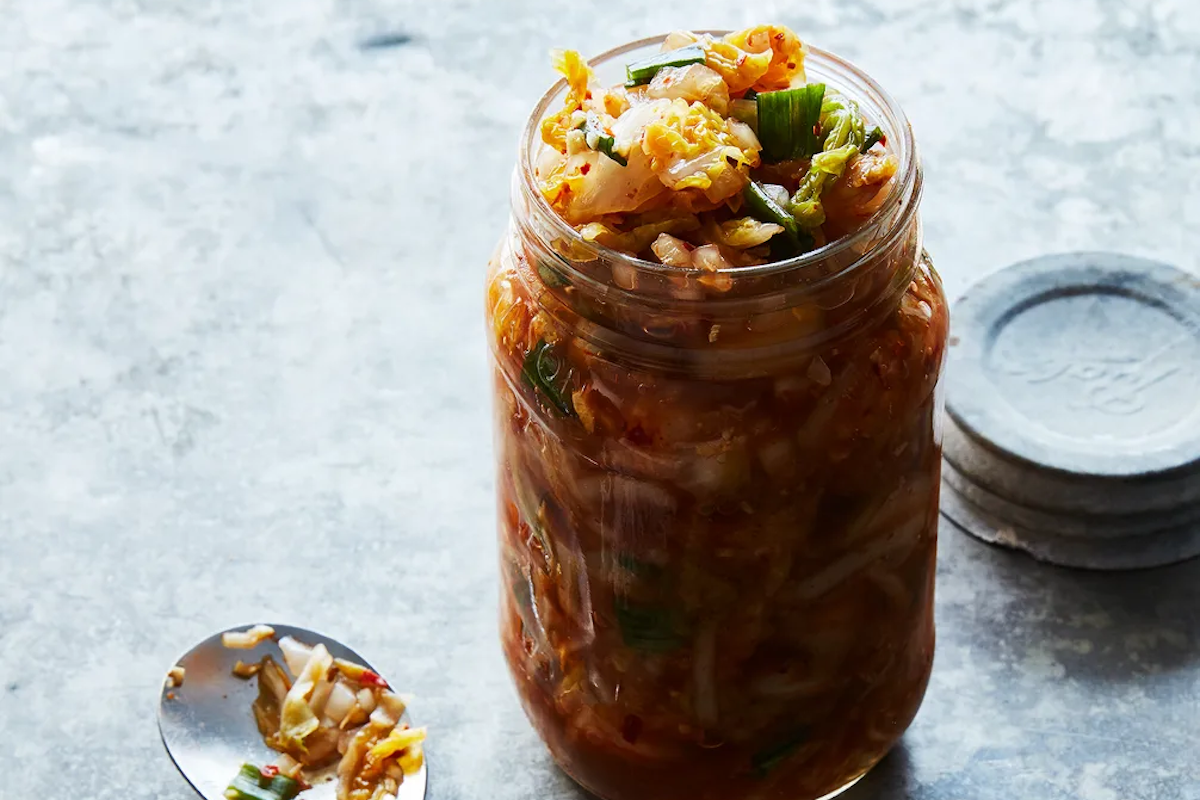 "Did you try popping your ears?" my mom asks me over the phone, as I'm standing in the home goods aisle of H Mart.

That's her answer for everything, including my bad week. Not to say that she takes my dips lightly. But unlike my friends or my cousins or even my brother, Jean often tries to link my lows with something physiological. Oh, you're depressed? There must be something wrong with your chemisms. (Her sister is a nurse, so she knows.)

And yet, even though I know a mere popping of my ears won't resolve how I'm feeling on the inside, there's something in the simple imperative ("Just pop your ears") that comforts me. I laugh, and shake it off. One call to my mother in Atlanta and instantly I feel a little better. When I'm at my worst, I often forget that there's a person out there who knows exactly what to say when I'm in a pickle — someone much wiser, much older, and much more empathetic.

I realize I've been standing in the home goods section staring at a wall of sake glasses, grocery basket still empty. So I steer the conversation toward her kimchi recipe, the reason I called her originally. I already hear her straightening up (it's late, which means she's in bed or on the couch watching TV). "OK, so," she starts, "you'll need . . ." Salted, fermented shrimp is an essential ingredient in kimchi. (Photo by Eric Kim)

I'm laugh-crying in H Mart right now — because what else would one do in an H Mart? I'm laughing because my mother is cackling over the phone at her poor excuse of a recipe (the measurements above are my translations, English and culinary).

"I don't know, one or two fistfuls of this?" she chuckles again. "Three or four mugfuls of that? I'm terrible."

It's funny to me, too. OK, I tell myself, that's like three cups. A coffee mug is usually eight ounces. And two tablespoons is what she means by "two rice spoonfuls." I'm also crying because I'm overwhelmed at how much better I feel just hearing her voice and her booming cackle.

How to make kimchi

Jean has a few rules about kimchi — and they're not strict, mind you, but they're hers. Which is to say that this kimchi is her kimchi and no one else's. But in my highly subjective opinion, this is the absolute best way to make it. I'll do my best to walk you through our notes from the phone call, but please, feel free to add your own flourishes here and there as you see fit. So much of this is to taste, anyway.

After I sent my mom pictures of the kimchi I made according to her verbal notes, she decided to make it too, this time writing down the measurements. These are her scribbles for a double recipe. PHOTO BY JEAN

This first step is essential for a couple of reasons: 1) It kills off any harmful bacteria that may be in the vegetable, leaving room for the good bacteria, aka Lactobacillus, to grow during the lacto-fermentation process that gives kimchi its distinct, pleasurable tang. 2) It also removes water from the cell walls, which aids in preservation later and, more importantly, in flavor. I've always thought of it as: less water means more concentrated cabbage taste (plus, the sauce will penetrate better).

My phone call with Mom was revealing, to say the least. I thought I had remembered her dry-brining the cabbage all those years, which is to say: placing huge buckets of napa, each cut in half or into quarters lengthwise from the root-end to about halfway up to the greener leafier part (but not all the way through). Yes, she still cuts them this way, claiming that the kimchi, when left intact like this, ripens slower but ends up tasting crunchier and yummier. But tonight she mentioned a salt bath, or wet brine, which does sound like a more uniform way to draw out water from the cabbage.

I go home and try to fit the cabbage into the biggest bucket I've got: my salad spinner. Of course, it doesn't fit. So I cut it up into bite-size pieces (it fits!), cover with tap water, and sprinkle over a non-iodized table sea salt I accidentally bought the other day, thinking the grains would be much bigger (but guess what small-grained salt is perfect for?). I remember what my mom said about brining smaller pieces like this: You'll only need to do it for 2 to 3 hours, versus the 6 to 8–hour brine of those whole heads. (I added the scallions here too, with the idea in mind that I'm also "kimchi-ing" them.)

One important tip my mom mentioned is to smoosh the cabbage around, making sure the salt and water and all of the vegetables get properly, evenly, salted.

Drain, then let sit while you prepare the sauce.

This next part is the easiest. Well, kind of. First, you have to make the paste, which will become the base of the kimchi sauce. This paste is really just a vehicle for all of the seasonings, to stretch the sauce so it covers more cabbage. I was shocked to learn that my mom now makes hers with...a potato! For years I watched her do it the classic way with glutinous rice flour, water, bubbled away until thick, then cooled. But I just tried her new method (which she picked up from her sister in Seoul) and it worked great.

For Jean's paste: Peel a potato, then grate it directly into a cup or so of boiling water until you've got a thick puree. 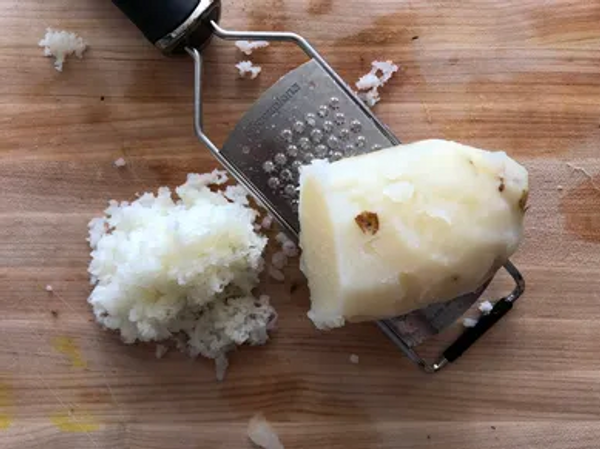 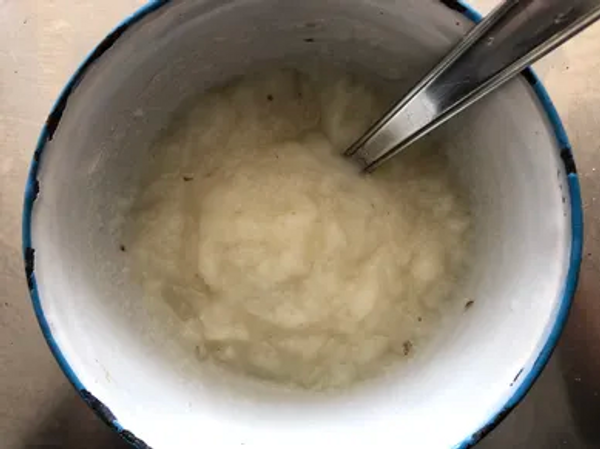 Full disclosure: I did this wrong; I thought she had told me to cook the potato first. But it actually turned out fine! There doesn't seem to be much of a difference between grating a cooked potato and mixing it into water versus grating a raw potato and cooking it in water.

I ended up only needing about half of the potato to create a loose mashed potato situation. Don't worry too much about whether it's too thick or too thin; you'll only need about 1/2 cup of this stuff for this kimchi recipe. But if you're like my mom, you'll make more.

Here's why: Jean likes to make a big batch of kimchi sauce and keep some back in the freezer so she can "kimchi" anything at a moment's notice. So if you end up with extra potato paste, don't throw it out. 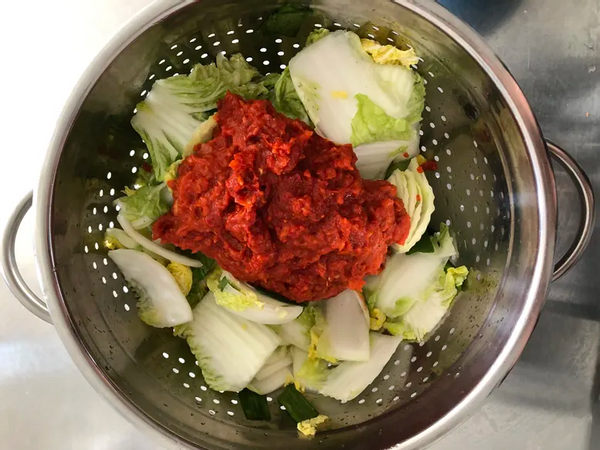 Confession: I forgot the daikon. Still tasted great, though! (Photo by Eric Kim)

Now we're at the easy part. In a small food processor, blitz the garlic, ginger, onion, pear, fish sauce, salted shrimp, gochugaru, and (to taste) salt and sugar. Stir this gorgeous red paste into the potato paste. At this point I actually don't even bother to taste (neither does my mom). What matters is how your seasonings taste with the cabbage. So onto the next step...

3. Smoosh it all around.

Just get in there! (With clean hands.) The Korean-mom move would've been to wear kitchen gloves here, but I haven't graduated to those yet. (Photo by Eric Kim)

Growing up, this is the point at which my mom would hold a container of salt in one hand and mix with the other, crouched down over a huge plastic bowl filled with crimson kimchi. She'd taste as she went, adjusting the salt, sugar, and red pepper powder until it was just right. I'd be watching from a couple feet away, her little taster; she'd call me over and pick out one perfect piece, wiping off any excess sauce, folding it up, holding it out ("Open!"), and placing it in my mouth.

Unfermented kimchi tastes great — different, but great. Which is why it's important to adjust at this stage according to your own tastes. Ask yourself: Does it need more salt? More sweetness? When I made this kimchi recently, I felt that it needed more savoriness, so I added another tablespoon of the salted shrimp. 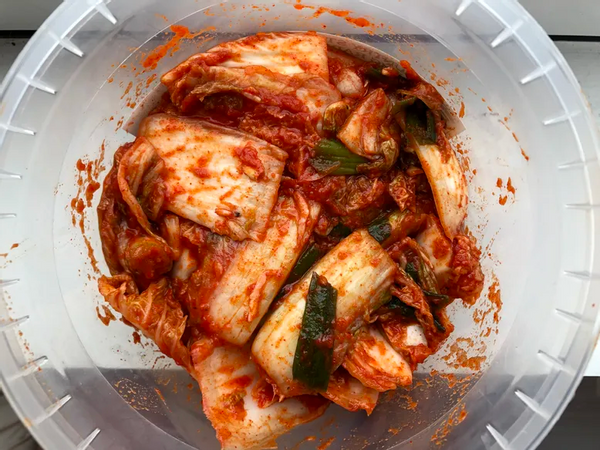 My breath is pretty garlicky at this point from all the tasting. (Photo by Eric Kim)5. Jar the kimchi and wait.

Large mason jars are great for storing and fermenting kimchi (but I just reuse old 3-pound H Mart kimchi buckets). Sometimes my mom sets aside a small portion of the unfermented kimchi so she and my dad can enjoy it throughout the week. But if you're in it for the funky stuff, then leave on the counter at room temperature for about 24 hours, then place in the fridge for a week or so. I like to taste as I go, i.e. 3 days later, 7 days later, 14 days later, because each version will taste different and funkier the longer it sits in the fridge.

Or if you're like my mom, you'll buy two (two!) separate kimchi fridges — one in the basement and one in the garage — to store your sta$h. And you'll forget about it completely until it's nice and ripe and rank, perfect for Korean dishes like kimchi jjigae and kimchi fried rice. 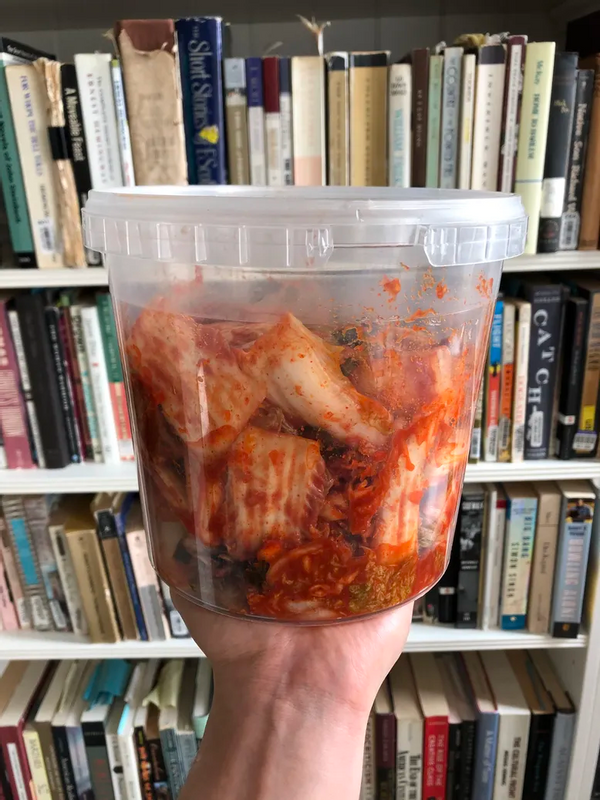 The absolute best kimchi is homemade. (Photo by Eric Kim)

If you're looking for even more instruction, I find that it helps to watch a video of the kimchi-making process. Maangchi is always a great resource, of course, as is this very relaxing video.

Here's one my mom sent me, claiming this is pretty close to how she does it herself (but the lady here makes three heads of napa cabbage and keeps them whole):

This isn't exactly like Jean's kimchi (or like her kimchi fried rice, for that matter), but it's my best attempt. The flavor of this dish will largely depend on how potent the kimchi you're working with is, and the savory, salty edge of toasted sesame oil and Spam round out the flavor.

Rather than getting rid of a partial jar of too-sour kimchi (the audacity!), Catherine Yoo developed this savory pancake recipe that makes use of the leftovers. They're not traditional, but they're super delicious, especially thanks to the extra-potent kimchi flavor.

"Spicy, tangy, and impossibly juicy napa cabbage kimchi canoodles in a pool of savory, garlicky, cream sauce (and the whole thing is topped with bubbling stringy cheeses). The natural tanginess of the kimchi and the addition of yogurt in the sauce cuts through the gratin's richness, with bursts of heat from chunks of pickled chiles," writes recipe developer Mandy @ Lady and Pups.

This cozy stew is so easy. It's hard to believe how easy it is to make, and yet how delicious. No cooking experience is necessary, which makes this the perfect recipe for a beginner cook to make when they want to impress someone. All you need is a jar of kimchi (including the brine), onion, sugar, sliced scallions, and sesame oil. Let that simmer for a while, then add pork belly and tofu and cook for about five more minutes. The end!

An unlikely pairing — well-fermented kimchi and pasta carbonara — comes together for this fresh take on ramen. The funky, savory flavor of Jean's homemade kimchi is delicious alongside the salty, fatty nature of bacon and Parmesan cheese.