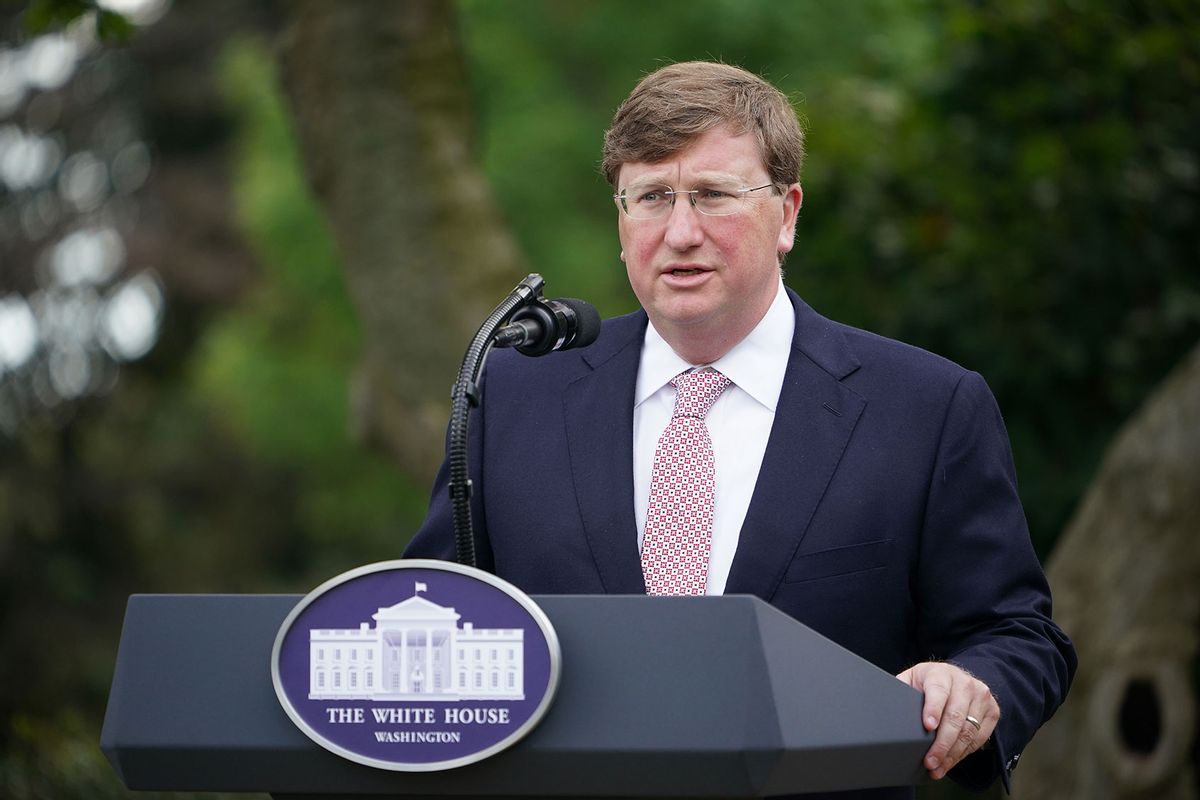 Mississippi Gov. Tate Reeves speaks on Covid-19 testing in the Rose Garden of the White House in Washington, DC on September 28, 2020. (MANDEL NGAN/AFP via Getty Images)
--

Mississippi's Republican Gov. Tate Reeves on Friday vetoed a bill that would have put an end to a Jim Crow-era voting restriction that make it harder for minorities in the state to vote.

The restriction, according to Mississippi Today, expressly prohibits people convicted of felonies from voting unless they are granted suffrage rights by a gubernatorial pardon or by two-thirds of both the state House and Senate.

"Felony disenfranchisement is an animating principle of the social contract at the heart of every great republic dating back to the founding of ancient Greece and Rome," Reeves wrote last week while announcing his veto. "In America, such laws date back to the colonies and the eventual founding of our Republic."

According to House Judiciary B Chair Nick Bain, the bill was originally intended to restore the voting rights of people whose crimes have been expunged. But even that small detail, still a far cry from full suffrage, did not make any difference in Reeve's vote.

According to Mississippi Today, the Magnolia State is just one of ten states that still bars people convicted of felonies from ever voting again.  The vast majority of states allow anyone with a felony on their record to vote after a certain period.

At present, over 235,000 Mississippi residents cannot vote due to felony disenfranchisement, according to the Sentencing Project. That means that roughly 10% of the state's population – and nearly 16% of its Black residents – cannot cast a ballot, the Guardian reports.

While states like Alabama, Florida, Kentucky, Iowa, Virginia, Louisiana and New York have all expanded felony voting rights in recent years, Mississippi's statutes on the matter have remained mostly unchanged.

Since 1997, the Guardian reported, just 185 people convicted of felonies have been granted the right to vote by the state legislature. Numerous voting rights advocates have criticized the ill-defined process that people with felonies on their record must go through to appeal for the right to cast a ballot.

"There really isn't a way to guarantee anything because the process doesn't really make sense. There's no information," Hannah Williams, a research and policy analyst at MS Vote, told The Guardian. "You can't go to a website. And to be honest, you can't even call the capitol to get information, because they don't really know what the process is."

RELATED: Nevada will restore voting rights to people with past felony convictions