Sanders: "Taxpayer dollars should not go to companies like Amazon and billionaires... who repeatedly break the law" 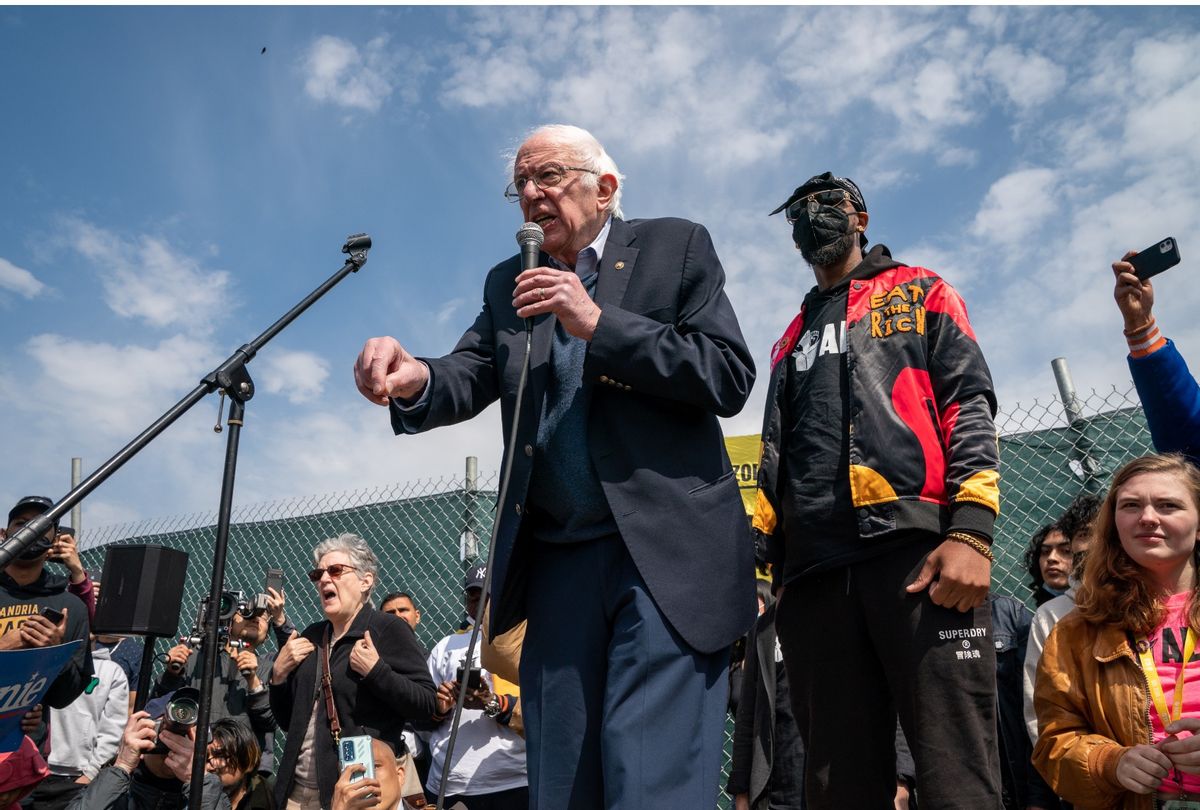 In a letter to Biden, Sanders, I-Vt., pointed to the president's campaign promise to "institute a multi-year federal debarment for all employers who illegally oppose unions" and "ensure federal contracts only go to employers who sign neutrality agreements committing not to run anti-union campaigns."

"The essence of your plan for strengthening union organizing was to make sure that federal dollars do not flow into the hands of unscrupulous employers who engage in union-busting, participate in wage theft, or violate labor law," the Vermont senator wrote. "In order to implement that plan, I urge you to sign an executive order preventing companies that violate federal labor laws from contracting with the federal government."

"As you may know, Amazon, one of the largest and most profitable corporations in America, is the poster child as to why this anti-union busting executive order is needed now more than ever," Sanders added.

In a floor speech Tuesday evening, the Vermont senator declared that "no government—not the federal government, not the state government, and not the city government—should be handing out corporate welfare to union busters and labor law violators."

"So today I say to President Biden: You promised to prevent union busters like Amazon from receiving lucrative contracts from the federal government," said Sanders. "Please keep that promise."

Federal agencies have fined Amazon dozens of times over the past two decades for a range of offenses related to workers' rights, including wage, hour, and workplace safety violations. A report released earlier this month estimated that the injury rate among Amazon's warehouse workers rose 20% in 2021, a year in which the company spent $4.3 million on anti-union consultants.

In recent weeks, the National Labor Relations Board (NLRB) has sued Amazon for unlawfully retaliating against union organizers and other "flagrant unfair labor practices."

In January, ahead of the historic union victory at JFK8 that Amazon is working to overturn, the NLRB alleged in a formal complaint that the company "repeatedly broke the law by threatening, surveilling, and interrogating their Staten Island warehouse workers who are engaged in a union organizing campaign."

Despite its repeated and ongoing transgressions, the powerful company continues to benefit from federal contracts. The National Security Agency, for instance, has quietly awarded Amazon Web Services a cloud contract worth up to $10 billion.

Sanders, the chair of the Senate Budget Committee, argued in his letter to Biden that Amazon "should not receive" the federal contract as long as it continues to engage in "illegal anti-union activity." Next week, Sanders is expected to preside over a hearing examining how many federal contracts flow to companies, including Amazon, that are fighting unionization efforts.

"Since 2004, Amazon has received thousands of federal contracts worth billions of dollars," Sanders wrote Tuesday. "Mr. President: Taxpayer dollars should not go to companies like Amazon and multi-billionaires like Jeff Bezos who repeatedly break the law."

The Vermont senator's demand comes as unions and lawmakers are pushing the New York attorney general to investigate whether Amazon has invalidated its eligibility for state-level taxpayer subsidies by violating labor laws. According to Good Jobs First, Amazon has received at least $4.18 billion in state and local taxpayer subsidies since 2000.