"It’s ironic that we allow Russian government sites to be on Twitter, but we don’t allow President Trump” 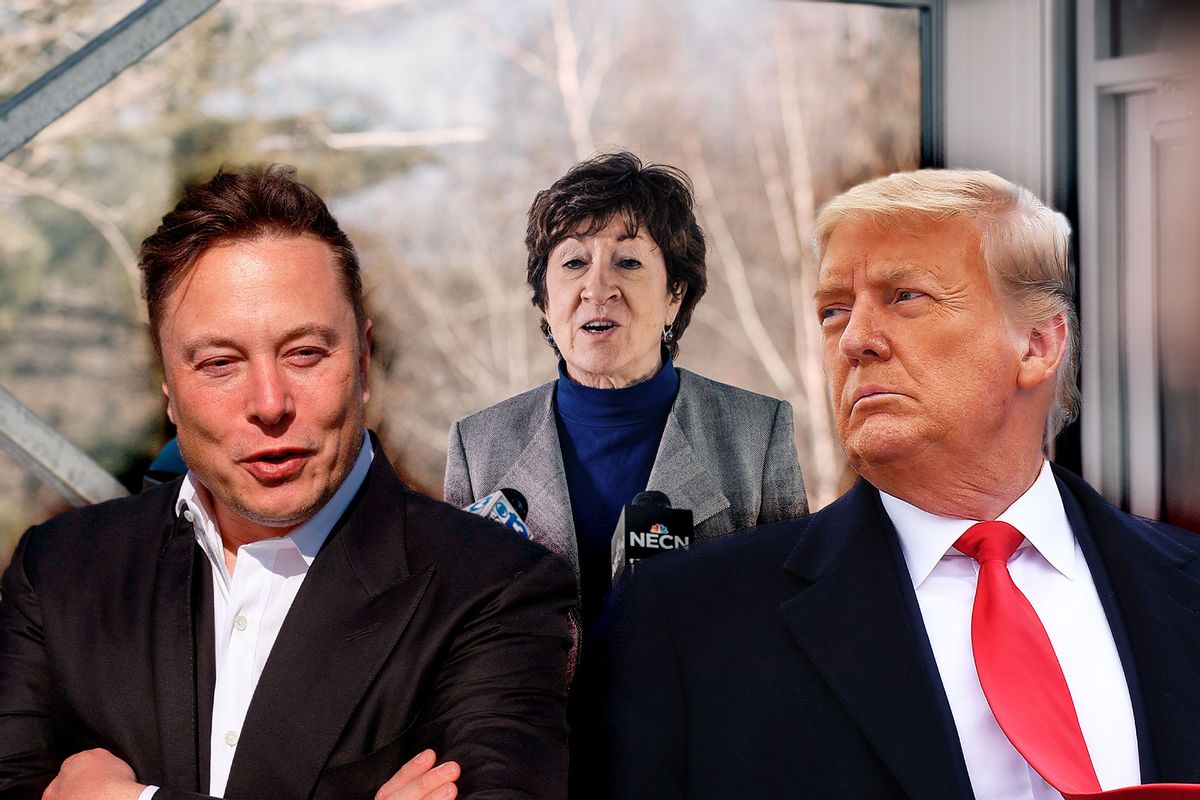 Sen. Susan Collins, R-Maine, encouraged Tesla CEO Elon Musk, who is set to purchase Twitter, to let Donald Trump back on the site, calling out the platform's "uneven" standards of conduct.

"Although I obviously don't agree with a lot of President Trump's tweets, I do think he should have his account back. To me, it's ironic that we allow Russian government sites to be on Twitter, but we don't allow President Trump," Collins told HuffPost on Tuesday.

Collins' remarks come just days after news outlets reported that Musk, the richest man in the world, plans on purchasing Twitter for $44 billion. After the announcement was made, numerous commentators speculated that the Tesla CEO might let Trump recover his Twitter account – which was permanently suspended shortly after the Capitol riot.

But on Monday, Trump claimed that he had no interest in returning to Twitter, despite the site's new ownership.

"I am not going on Twitter, I am going to stay on TRUTH," Trump told Fox News, referring to the social media platform he founded himself, called "Truth Social."

"I hope Elon buys Twitter because he'll make improvements to it and he is a good man, but I am going to be staying on TRUTH," he added.

RELATED: "All bets are off": The "brains" behind Trump's Truth Social app just quit amid botched launch

Meanwhile, shares of Digital World Acquisition Corporation, Trump's SPAC, have fallen precipitously since news of Musk's acquisition broke. According to CNN, Digital World has reportedly lost 44% of its entire value over the last several days.

In Congress, Republicans have mostly lauded Musk's purchase of Twitter, with some cheering on the notion that Trump might get back on the site.

Sen. Ted Cruz, R-Tex., told HuffPost that the Tesla CEO should "absolutely" grant the former president access to his account again. Cruz also called the acquisition "the most important development for free speech in decades."

Sen. Steve Daines, R-Mont., also threw his support behind the idea, saying, "If Iranian leaders can be on and the Russians are going to be, I think that President Trump should be,"

Musk has yet to formally announce whether Trump's account will be reinstated.

RELATED: Twitter should have died long ago — let Elon Musk take it out back and shoot it