The best way to store basil, according to experts 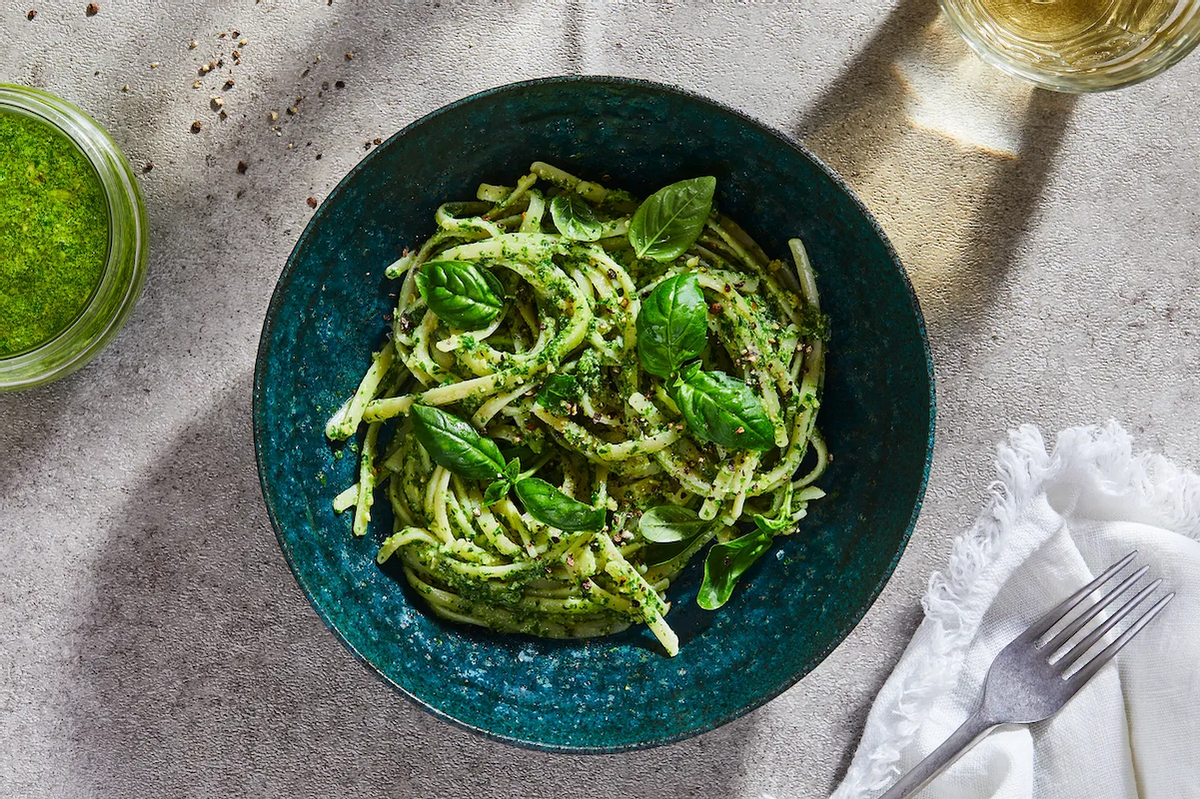 It may be the herb that turns thick slices of mozzarella cheese and tomato into a Caprese salad, or what perks up marinara sauce, lemon cocktails, and grilled corn. Unfortunately, basil is also a ticking time bomb: The very second I buy it from the market, it slouches and slumps. Its arms are touching its toes before I even get it into my kitchen, and over the course of the week (if that long!), I inevitably watch the once-perky bunch lose the will to live. It pains me, the defeatist feeling that there's nothing I can do to keep my basil alive. In the blink of an eye, a bunch of basil leaves will lose their vibrant green color and turn brown (or worse)

There are lots of tips for the best way to store fresh basil leaves — and I've tried most of them, with little repeated or sustained success. So it's time to approach the issue more strategically, testing the methods side by side in order to determine which one will be the true lifeline.

The best way to store basil, according to experts

Before testing a few different methods myself — including storing basil at room temperature (both covered and uncovered in a glass jar), and storing basil in the fridge in a loose plastic bag — I reviewed what other cooking experts had to stay about this. Alexandra Stafford, who cooks a wondrous array of beautiful, delicious food (if you follow her on Instagram, I don't have to tell you this), recommends storing the basil out of the fridge: Snip off any bands, trim the bottoms, then transfer to a tall jar with a small amount of water. But don't just abandon it there. Instead, treat the basil like a flower bouquet, changing the water every couple of days and making sure no leaves are below the waterline (otherwise, they'll get slimy and discolored).

While most tender herbs will last longer if they're stored clean and dry, I couldn't find many authorities that recommended rinsing basil leaves before storage. Some experts advise loosely covering the bunch with a plastic bag: J. Kenji López-Alt of Serious Eats goes a step further. He has found that "keeping the tops of those herbs tightly covered by placing an overturned zipper-lock bag over them and sealing it against the base of the jar was also an essential step in keeping them fresh." He stores herbs in sealed quart containers with just a small amount of water on the bottom. Would a tight seal be much more effective than a loose cover?

And most people say to keep basil at room temperature (as refrigeration will cause the leaves to darken and bruise), but you'll find dissenters out there ( . . . can they be trusted? I shall see).

Armed with that information, I bought a few big bunches of basil, split them up, fetched my prayer beads, and organized six tests.

The first method I tried, which no one recommends, is placing the unwashed basil in the fridge in the plastic bag or clamshell it came in. This method is also known as "the lazy gal's method" aka what my boyfriend would do if I weren't there to scold him harshly. There's no strategy or logic to this method, so it's no surprise that this doesn't work great, especially in the long-term (more on that later).

Finally, the renegade of basil storage: storing the fresh leaves like salad greens. I picked, washed, and dried the leaves, then wrapped them in a dry paper towel, sealed the parcel in a plastic bag, and stored in the fridge

Every evening at 8 PM on the dot, I made my "basil rounds" (I'm a doctor, did you know?), examining each of my patients and taking copious notes on the firmness and color of the leaves, as well as the smell and "slime" of the bunch overall. I'll spare you the super detailed notes and get straight to a synopsis of the good, the bad, and the ugly.

And, a quick disclaimer: My apartment is very warm, and the A/C does not reach the kitchen. Additionally, many of the "room temperature" bunches were actually quite close to my often-in-use oven, which has no heat retention. In other words, it's a sauna in there. I'm sure all of the basil would've lasted longer in a more temperate environment. Keep this in mind as I share the results.

Right away, winners were already being distinguished from the losers. The refrigerated bouquet was, out of the gate, the gloomiest and darkest of the bunch (my notes say: "Already sad and droopy. Wouldn't be proud to put this on a Caprese. Probably won't keep these past day 3").

All of the others looked OK (this was the first day, after all), though I did notice some black spots on the renegade leaves. The room temperature flower bouquets, both uncovered and covered, were holding up, though I had some concerns with the method: It was hard to know whether all of the leaves were getting sufficient water, and I felt like I had to peel off a lot of low-hanging leaves so that they wouldn't be submerged (which felt like a waste). Plus, the outer leaves seemed to have a higher propensity toward drooping than the inner ones.

As for the quart container bunch, I noticed troublesome condensation that I thought could lead to mold. I decided to keep the top of the container propped slightly open for the rest of the experiment so that there would be at least some air circulation.

The biggest surprise was that the control bag, which I just shoved into the fridge as it was, still looked just fine! I would've definitely used it to garnish a salad, with no need to blanch, pulverize, or manipulate it in any way.

By Day 2, the control bag's fortunes had taken a sudden turn. It was droopy, with crushed brown leaves, and many of the outer leaves had started to fall off. Nothing smelled funky or moldy, but it would never win a beauty contest.

The other big loser? The refrigerated flower bouquet. While the inner part of the bunch was fine (green, perky, fresh), the outer leaves were drooping, and some were almost completely black.

I noticed that the room temp bouquets were starting to droop a little, but not dramatically. Although some of the leaves on the uncovered bouquet were starting to yellow, it was faring better than its covered counterpart. When I took that bunch out of the jar to freshen the water, many of the leaves fell off, and I noticed there was sliminess and discoloration at the bottom of the stems.

The quart container leaves looked perky and smelled fragrant, while the renegade leaves were pretty much the same as the day before.

When mid-week rolled around, I declared the control bag nearly dead ("would not eat 90% of it"). The refrigerated bouquet was nearly as bad, except that some of the leaves in the middle remained green and firm. Compared to those two, the renegade leaves looked and smelled fresher, though black spots continued to proliferate.

As for the room temperature bunches, the basil stored in the quart container looked the best: "No leaves are completely black and fewer leaves are falling off!" I noted. The other bouquets, both covered and uncovered, were losing a lot of volume.

This is when I started to eliminate some altogether. I declared the control basil and the refrigerated bouquet dead. Of the refrigerated options, the renegade method worked best, but by this point, almost all of the leaves were spotted with black.

At this point, I'd crossed off all of the refrigerated options. Not only were the renegade leaves black and slimy, but they also smelled funky. That left the three room temperature options, among which the loosely covered bunch was definitely the weakest link. It was droopier and darker than the uncovered bouquet, and some of the leaves had even started to grow mold.

And so I was down to the uncovered bunch and the quart container bunch, both of which were fairly happy and healthy, even into the morning of Day 6.

Yes, there were black spots, some droopiness, and — in the case of the uncovered bunch — a thinning of leaves, but they looked and smelled fresh. Some of the leaves were even pristine enough to adorn an open-faced sandwich!

So which method is the best?

If you have to, you can store your basil in a plastic bag, just as it is, in the fridge, for a few hours. My "control basil" was fine for the first day or so. No need to tend to it immediately. You can also pluck the leaves, wash and dry them, and store them like salad greens if you're going to be using them within a day. That's the renegade technique, and it also presented no issues for the first couple of days.

For longer-term storage, avoid the refrigerator! Store your basil like a flower bouquet — uncovered — or tuck it into a quart, leaving the top propped open. Both work well, but I actually prefer the quart container method: It has the advantage of containing your bunch, which seems to stymy droopage and prevent leaves from shedding onto the counter. Bunch 2C seemed to maintain its volume better than 2A (this might not be an issue if you're using a little basil every day).

Where to store basil

Keep your basil in a sunny — but not hot — location (a tricky balance). I've taken to keeping my basil in the windowsill in my bedroom, which is air-conditioned at night. Recognize that a) your basil probably won't stay good for "weeks" (I'd say six days, max) and that b) you're going to lose some leaves. Even the best storage methods presume that you'll use the basil throughout the week, rather than buying it six days in advance and waiting to eat it.

Sure, keeping six bunches of wilting basil in my very small kitchen for a week was unduly stressful, but I feel more confident knowing the methods that are proven to work.