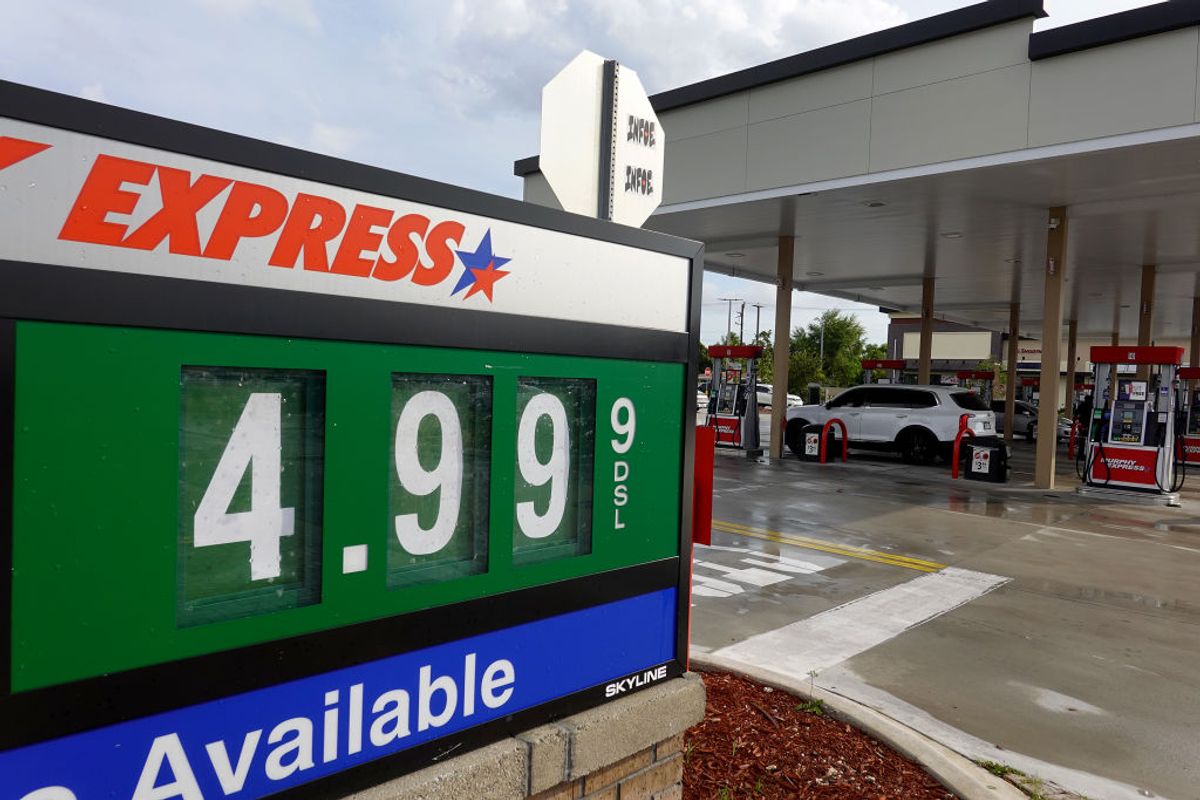 According to the Consumer Price Index U.S. consumer prices went up by 7.9% in the last 12 months. (Joe Raedle/Getty Images)
--

Research out Monday reveals that CEOs from 28 of the top oil and gas companies enjoyed a combined $394 million in total compensation in 2021, including through "eye-popping" bonuses that together topped $31 million.

The analysis from Accountable.US, first reported by The Guardian, comes as inflation-hit consumers see gas prices soaring while fossil fuel companies stand accused of making "gobs of money" off the global energy crisis triggered by Russia's invasion of Ukraine.

Among the CEOs singled out in the analysis are Exxon's Darren Woods and Marathon Oil's Lee Tillman, whose 2021 compensation included bonuses of $3.1 million and $3.5 million, respectively.

"Americans will not soon forget that when they were struggling to fill their tanks, oil and gas companies made billions in record profits and decided to give that money to wealthy industry executives and shareholders rather than help consumers by stabilizing gas prices," Accountable.US president Kyle Herrig said in a statement.

Herrig added, "It's time for Big Oil to stop lying about the Biden administration's energy policies and quit using inflation and the crisis in Ukraine to cash in and line their pockets at our expense."

The findings followed an analysis released last month and conducted by advocacy groups Oil Change International, Greenpeace USA, and Global Witness that estimated that U.S. oil and gas corporations could collect up to $126 billion in windfall profits this year thanks to continued high global gas prices. ConocoPhillips, Chevron, Occidental Petroleum, and ExxonMobil stand to be the biggest winners of the windfall, the groups found.

"As long as the price of oil stays elevated, the price at the pump will struggle to fall," said Andrew Gross, a AAA spokesperson, in a statement.

"Consumers may be catching a little break from March's record-high prices," he said, "but don't expect any dramatic drops."

Last month, Democrats introduced bicameral legislation to get some relief for the high prices into Americans' pockets. Called the Big Oil Windfall Profits Tax, the measure was led by lawmakers including Rep. Ro Khanna, D-Calif., and Sen. Sheldon Whitehouse, D-R.I.

According to Richard Wiles, president of the Center for Climate Integrity, "The oil and gas industry got the world into this mess by lobbying and lying to keep us hooked on fossil fuels. Now they're using the war in Ukraine to distract us from the fact that they are ripping off hardworking Americans with high gas prices as they reap record earnings."

"It's time we stop allowing Big Oil to use its record profits, earned on the backs of hardworking American families, to reward wealthy shareholders and CEOs," said Wiles, "and instead make them pay a fair share to lower the cost for consumers."